This page can be viewed at http://www.historycommons.org/entity.jsp?entity=kathy_blades_1

Kathy Blades was a participant or observer in the following events: 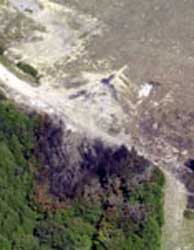 Looking straight down onto the Flight 93 crash site. North is to the top. Note the impact point north of the road, and the burned trees to the south of it. [Source: FBI]A second plane, described “as a small, white jet with rear engines and no discernible markings,” is seen by at least ten witnesses flying low and in erratic patterns, not much above treetop level, over the crash site within minutes of United Flight 93 crashing. (Carlin 8/13/2002)

Lee Purbaugh: “I didn’t get a good look but it was white and it circled the area about twice and then it flew off over the horizon.” (Wallace 9/12/2002)

Susan Mcelwain: Less than a minute before the Flight 93 crash rocked the countryside, she sees a small white jet with rear engines and no discernible markings swoop low over her minivan near an intersection and disappear over a hilltop, nearly clipping the tops of trees lining the ridge. (Pillets 9/14/2001) She later adds, “There’s no way I imagined this plane—it was so low it was virtually on top of me. It was white with no markings but it was definitely military, it just had that look. It had two rear engines, a big fin on the back like a spoiler on the back of a car and with two upright fins at the side. I haven’t found one like it on the Internet. It definitely wasn’t one of those executive jets. The FBI came and talked to me and said there was no plane around.… But I saw it and it was there before the crash and it was 40 feet above my head. They did not want my story—nobody here did.” (Wallace 9/12/2002)

John Fleegle and two work colleagues arrive at the crash site “before any fireman or paramedics or anybody.” According to Fleegle, “When we got there, there was a plane flying up above and he was smart, he flew straight for the sun so you couldn’t look at it and see exactly what type of plane, if it was a fighter or what it was.” However, Fleegle claims the plane “was decent sized. It wasn’t just a little private jet or something like that, from what we could see.” (Lappe and Marshall 2004, pp. 35-36)

Dennis Decker and/or Rick Chaney, say: “As soon as we looked up [after hearing the Flight 93 crash], we saw a midsized jet flying low and fast. It appeared to make a loop or part of a circle, and then it turned fast and headed out.” Decker and Chaney described the plane as a Learjet type, with engines mounted near the tail and painted white with no identifying markings. “It was a jet plane, and it had to be flying real close when that 757 went down. If I was the FBI, I’d find out who was driving that plane.” (Pillets 9/14/2001)

Kathy Blades, who is staying about quarter of a mile from the impact site, runs outside after the crash and sees a jet, “with sleek back wings and an angled cockpit,” race overhead. (Bunch 11/18/2001)

Anna Ruth Fisher says, “After the crash, another jet went near over to look.” Her mother, Anna B. Fisher, adds, “We were looking at the smoke cloud when we saw the jets circling up there.” (Kashurba 2002, pp. 27)

Jim Brandt sees a small plane with no markings stay about one or two minutes over the crash site before leaving. (Pittsburgh Channel 9/12/2001)

Bob Page sees a large plane circling the crash site for about two or three minutes, before climbing almost vertically into the sky. He cannot see what kind of plane it is or if there are any markings on it, but says, “It sure wasn’t no puddle jumper.” (Pittsburgh Tribune-Review 9/12/2001)