This page can be viewed at http://www.historycommons.org/entity.jsp?entity=ken_shuey_1

Ken Shuey was a participant or observer in the following events:

August 14, 2002: FBI’s Identification of Mailbox Used in Anthrax Attacks May Be Incorrect 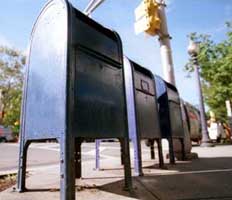 The FBI claims the anthrax letters were sent from the middle mailbox of these three mailboxes on Nassau Street, Princeton. [Source: Jill Becker / The New York Times]The Times of Trenton, a Trenton, New Jersey, newspaper, reports that there are doubts about the FBI’s recent claim that the mailbox where the anthrax letters were sent has been found (see December 2001-Early August 2002). The newspaper reports, “[I]nvestigators say it is impossible at this point, and might never be determined, whether the Nassau Street mailbox was a point of origin for one of the letters or if it became contaminated through contact with other mail or equipment containing traces of anthrax.” FBI agent Ken Shuey, in charge of the FBI’s temporary field office based in Trenton, says, [W]e can’t say with certainty where the letters entered the mail system until we have some other corroboration or someone confesses.” The difficulty is that the mailbox served two purposes: members of the public could drop letters in it, but it was also used to hold sorted mail for letter carriers to deliver. The mailbox is the only one out of about 650 mailboxes in the area to test positive for anthrax, but there seems to be no way to tell if the anthrax was from letters placed directly into it or cross-contamination by letters from other nearby mailboxes that were passing through it. State Health Commissioner Clifton Lacy says he suspects cross-contamination is to blame for the anthrax detection. FBI spokesperson Bill Evanina says: “We have no idea. It could be something that was placed in the box or it could be cross-contamination. It is way, way too early to tell.” (Bewley and Shea 8/14/2002) Other newspapers fail to report on the cross-contamination problem and, as of September 2008, the FBI has yet to make public information explaining any solution to the problem.