This page can be viewed at http://www.historycommons.org/entity.jsp?entity=larouche_youth_movement_1

LaRouche Youth Movement was a participant or observer in the following events:

August 18, 2009: Democrat Answers Accusations of ‘Nazi’ Health Care Reform: ‘On What Planet Do You Spend Most of Your Time?’ 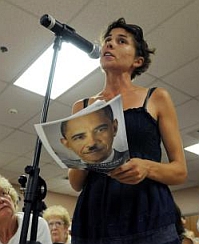 A member of the LaRouche Youth Movement compares the Obama health care reform proposal to Nazi policies. [Source: Darren McCollester / Getty Images]A testy Representative Barney Frank (D-MA) loses patience with a raucous, shouting crowd of angry protesters at a two-hour town hall meeting in Dartmouth, Massachusetts. Frank, who strongly supports the Democrats’ health care reform proposals, attempts to answer the shouted questions and accusations from protesters, who often attempt to shout him down before he can complete his answers, and boo him from the moment he is introduced. Frank repeatedly asks, “You want me to talk about it or do you want to yell?” and asks, “Which one of you wants to yell next?” He also says frequently: “Disruption never helps your cause. It just looks like you’re afraid to have rational discussion.” Frank finally loses patience when Rachel Brown of the LaRouche Youth Movement tells him that President Obama’s health care policies are comparable to those of Nazi Germany, meanwhile waving a pamphlet depicting Obama with a Hitler mustache. “This policy is actually already on its way out,” Brown says. “It already has been defeated by LaRouche. My question to you is, why do you continue to support a Nazi policy as Obama has expressly supported this policy? Why are you supporting it?” Frank, a Jew, retorts: “When you ask me that question, I’m going to revert to my ethnic heritage and ask you a question: On what planet do you spend most of your time? You stand there with a picture of the president defaced to look like Hitler and compare the effort to increase health care to the Nazis.” He says her ability to deface an image of the president and express her views “is a tribute to the First Amendment that this kind of vile, contemptible nonsense is so freely propagated,” and concludes: “Trying to have a conversation with you would be like trying to argue with a dining room table. I have no interest in doing it.” During less contentious moments, Frank rebuts claims that the reform proposal would mandate free health care for illegal immigrants, and attempts to read the pertinent section of the bill through the shouts and catcalls. He asks why protesters demand for him to answer and then scream through his answers: “What’s the matter with you all? I don’t know if you get angrier when I answer the questions, or when you don’t think I do.” (Associated Press 8/19/2009; CNN 8/19/2009; Carlile 8/19/2009; Cohen 8/19/2009; Boston Globe 8/20/2009)
'Look for the Mustache' - A representative of the Massachusetts Republican Party later says Brown and other LaRouche supporters were at the forum “to cause problems,” and denies any Republican involvement in the shouting or pamphleteering. A LaRouche spokeswoman, Nancy Spannaus, says, “LaRouche PAC members are giving leadership to these town hall meetings all around the country so we are being at any one that we possibly can.” The Obama “mustache poster” “symbolizes the fact that the president is attempting to implement a Hitler health care policy,” she adds. “At any town hall, you’ll know LaRouche people are there if you just look for the mustache.” (Franke-Ruta and Lovenheim 8/20/2009)
Fox News: Frank's Remarks Proof that Democrats are 'Alienating Voters' - Fox News talk show host Sean Hannity and a Fox reporter, Griff Jenkins, say that Frank’s retorts to the protesters are proof that Democrats are “alienating voters” with their reform policies. Jenkins tells Hannity that Frank “talked down” to the protesters. Hannity calls Frank’s comments full of “arrogance [and] condescension.” Representative Michele Bachmann (R-MN), Hannity’s guest, praises the LaRouche questioner and other protesters as evidence of American “democracy in action.” (Hannity 8/18/2009)