This page can be viewed at http://www.historycommons.org/entity.jsp?entity=larry_lynch_1

Larry Lynch was a participant or observer in the following events: 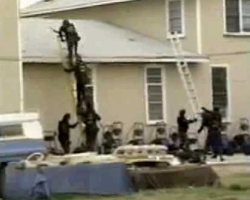 BATF agents attempt to enter the Branch Davidian compound. [Source: Associated Press]During the raid on the Waco, Texas, Branch Davidian compound (see 5:00 A.M. - 9:30 A.M. February 28, 1993 and 9:30 A.M. and After, February 28, 1993), Wayne Martin, a Davidian and a Harvard-educated lawyer, calls 911. According to a recording of his call, Martin shouts: “There are 75 men around our building and they’re shooting at us! Tell ‘em there are children and women in here and to call it off!” Other similar phone calls are made to the 911 center and to the sheriff’s office. The sheriff attempts to reach the BATF commanders and put them in touch with Martin. (Dean M. Kelley 5/1995) Audiotapes of the phone calls between Martin and McLennan County Sheriff’s Department official Larry Lynch, released months later (see June 2003 and After), show Lynch’s efforts to persuade Martin to have the Davidians stop firing on wounded agents. Lynch asks Martin to let four wounded BATF agents reach another agent shot six times during the battle; Martin suddenly says the others in the compound fear an all-out assault. “We’re worried that the National Guard will fly in here with choppers,” he says. “We’re gonna assume that any chopper that comes in is National Guard.” While Lynch works to calm Martin, a BATF agent on another line tells Lynch: “All of our guys are in the open right now. If they open up, we’re gonna lose 20 guys.” Lynch asks Martin if the authorities can help any wounded Davidians, only to be told: “Here’s the message. We don’t want any help from your country.… I can tell you now. They’re not gonna leave this property.… Nobody wants to leave.… Each man’s making his own decision.… Some of them are dying.” (Hancock 8/7/1993)