This page can be viewed at http://www.historycommons.org/entity.jsp?entity=lester_aspin_1

Lester Aspin was a participant or observer in the following events:

US Representative Lester Aspin (D-WI), chairman of the House Armed Services Committee, sends a letter to Army Secretary John Marsh criticizing the Army Inspector General’s Office for failing to keep the identity of a key whistleblower confidential and for botching an investigation into corruption within the highly secretive Continuity of Government (COG) program (see Summer 1987). The House Armed Services Committee is currently investigating the case of Army intelligence officer Tom Golden, who was retaliated against after revealing to Army investigators several instances of waste, fraud, and abuse within the COG unit stationed at Fort Hauchuca, Arizona (see July 1987 and After July 1987). Aspin expresses “concern about the objectivity and competence of the investigation,” noting that “confidentiality was breached almost immediately by the head of the inspector general inspection team,” referring to Colonel Ned Bacheldor, formally the chief of the inspector general’s intelligence oversight division, who spoke with Golden personally and later leaked his identity to the very officers Golden had implicated. Bacheldor left the inspector general’s office midway through the investigation of Golden’s case to join the COG unit at Fort Hauchuca. Aspin’s committee will conclude that Golden is the victim of a retaliatory smear campign led in part by Bacheldor. The Army Inspector General’s Office has reached a similar conclusion (see Summer 1987), as will the Justice Department (see January-November 1990), but the effort to discredit Golden will continue (see August 1990). (Emerson 8/7/1989; Weiner 12/16/1990; Weiner 12/18/1990)

March 20, 1989 and After: Dick Cheney Becomes Secretary of Defense 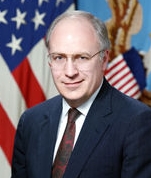 Dick Cheney’s official photo as Secretary of Defense. [Source: US Department of Defense]Former Representative Dick Cheney (R-WY) becomes secretary of defense under President George H. W. Bush. (US Department of Defense 11/24/2005) Cheney is the second choice; Bush’s first consideration, former Texas senator John Tower, lost key Senate support when details of his licentious lifestyle and possible alcoholism became known. Cheney was the choice of, among others, Vice President Dan Quayle and National Security Adviser Brent Scowcroft, who both feel that Bush needs someone in the position fast, and the best way to have someone move through the confirmation process is to have someone from Congress. Although Cheney never served in the military, and managed to dodge service during the Vietnam War with five student deferments, he has no skeletons in his closet like Tower’s, and he has the support of Congressional hawks. His confirmation hearings are little more than a formality.
Cheney Leaves the House, Gingrich Steps In - Cheney’s House colleague, Republican Mickey Edwards, later reflects, “The whole world we live in would be totally different if Dick Cheney had not been plucked from the House to take the place of John Tower.” Cheney was “in line to become the [GOP’s] leader in the House and ultimately the majority leader and speaker,” Edwards will say. “If that [had] happened, the whole Gingrich era wouldn’t have happened.” Edwards is referring to Newt Gingrich (R-GA), the future speaker of the House who, in authors Lou Dubose and Jake Bernstein’s own reflections, “ushered in fifteen years of rancorous, polarized politics.” While Cheney is as partisan as Gingrich, he is not the kind of confrontational, scorched-earth politician Gingrich is. According to Edwards, no one can envision Cheney moving down the same road as Gingrich will.
Successful Tenure - As the Pentagon’s civilian chief, many will reflect on Cheney’s tenure as perhaps his finest hour as a public servant. “I saw him for four years as [defense secretary]. He was one of the best executives the Department of Defense had ever seen,” later says Larry Wilkerson, who will serve in the Bush-Cheney administration as chief of staff to Secretary of State Colin Powell. “He made decisions. Contrast that with the other one I saw [Clinton Secretary of Defense Lester Aspin], who couldn’t make a decision if it slapped him in the face.” Cheney will preside over a gradual reduction in forces stationed abroad—a reduction skillfully managed by the Chairman of the Joint Chiefs of Staff, Colin Powell.
Bringing Aboard the Neoconservatives - Cheney asks one of Tower’s putative hires, Paul Wolfowitz, to stay; Wolfowitz, with fellow Pentagon neoconservatives Lewis “Scooter” Libby and Zalmay Khalilzad, will draft the Pentagon’s 1992 Defense Planning Guide (DPG) (see February 18, 1992), a harshly neoconservative proposal that envisions the US as the world’s strongman, dominating every other country and locking down the Middle East oil reserves for its own use. Though the DPG is denounced by President Bush, Cheney supports it wholeheartedly, even issuing it under his own name. “He took ownership in it,” Khalilzad recalls. Cheney also brings in his aide from the Iran-Contra hearings, David Addington (see Mid-March through Early April, 1987), another neoconservative who shares Cheney’s view of almost unlimited executive power at the expense of the judicial and legislative branches. (Dubose and Bernstein 2006, pp. 87-95)