This page can be viewed at http://www.historycommons.org/entity.jsp?entity=loose_change_1

Loose Change was a participant or observer in the following events: 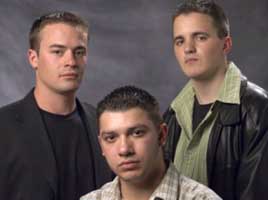 Korey Rowe, Jason Bermas, and Dylan Avery. [Source: Beyond the Ordinary]A feature-length documentary film is released that suggests the 9/11 attacks were planned and implemented by people within the US government. The film, called Loose Change, is made by three men in their twenties from upstate New York: Dylan Avery, Korey Rowe, and Jason Bermas. The three are “Entirely self-taught, and without a single journalistic qualification between them beyond a couple of media courses Jason sat at college ” Avery, the film’s writer and director, had begun work on it when he was just 18. (Sales 8/2006; Pilkington 1/26/2007) The original version of Loose Change is released in April 2005. In response to advice and criticism, an updated “2nd Edition” comes out in January 2006. (Manjoo 6/27/2006) The London Daily Mail describes the film as “a blitz of statistics, photographs pinched from the web, eyewitness accounts and expert testimony, all set to hip-hop music. And it is dramatically changing the way people think about 9/11.” (Reid 2/9/2007) Some of Loose Change’s key allegations are:

The World Trade Center towers were in fact brought down as a result of a “carefully planned controlled demolition.”

Flight 77 did not hit the Pentagon. Hani Hanjour, its alleged terrorist pilot, lacked the flying skills necessary to make the difficult maneuver supposedly made by this flight. Instead, the building looked more like a missile had hit it.

Flight 93 did not crash in a field in Pennsylvania. The debris field showed nothing resembling a crashed airplane. Instead, it landed at Cleveland Hopkins Airport, after this had been evacuated.

Cellphone calls made from the hijacked planes were in fact staged. The film refers to a study that claims phones wouldn’t get cellular signals at high altitudes.

Video footage of Osama bin Laden claiming responsibility for 9/11 was faked. (Manjoo 6/27/2006; Pilkington 1/26/2007; Monbiot 2/6/2007)
The documentary is hugely popular. By early 2007, an estimated 100,000 copies of it on DVD will have been sold and about 50,000 copies given away free. An unknown number of duplicates will have been given out, due to the makers’ encouragement of viewers to burn their own copies and pass them on. Up to 50 million people will see it when it is shown on television in 12 countries on the fifth anniversary of 9/11. Millions more watch it for free over the Internet. Vanity Fair says Loose Change “just might be the first Internet blockbuster.” (Sales 8/2006; Pilkington 1/26/2007) The film also receives some harsh criticism. Canadian journalist Gwynne Dyer calls it “pure paranoid fantasy.” (Dyer 3/8/2007) British left-wing journalist George Monbiot calls it “a virus sweeping the world” that “infects opponents of the Bush government… and turns them into gibbering idiots.” He claims, “Read some conflicting accounts, and Loose Change’s case crumbles faster than the Twin Towers.” (Monbiot 2/6/2007) Some skeptics of the official 9/11 account are also critical, and while agreeing that the US government was behind 9/11, disagree with many of Loose Change’s specific claims. According to Vanity Fair, though, “Undoubtedly what has put Loose Change ahead of the pack of 9/11 conspiracy fare is that it’s a pretty watchable movie—especially considering it cost $2,000 and was made on Avery’s Compaq Presario laptop.” (Manjoo 6/27/2006; Sales 8/2006)