This page can be viewed at http://www.historycommons.org/entity.jsp?entity=lynn_davis_1

Lynn Davis was a participant or observer in the following events: 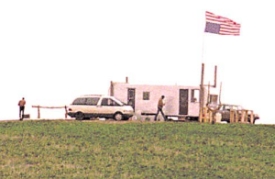 Two armed Freemen man a patrol outpost on their besieged ranch. The US flag is flown upside down to indicate distress. [Source: Idaho Observer]Undercover FBI agents arrest the leader of the Montana Freemen (see 1993-1994), LeRoy Schweitzer, and two of his colleagues, Daniel E. Petersen Jr. and Lavon T. Hanson, on the “Justus Township” ranch (see September 28, 1995 and After). Schweitzer and Peterson go out in the early morning to inspect the site of a ham radio antenna they were having set up to facilitate communications; the site is on the ranch, but some distance from the main compound. The two are responding to a request from the chief of the installation crew to inspect the antenna. When they arrive, they learn that the installation crew is actually composed of FBI agents. Though Schweitzer and Petersen are heavily armed, they do not resist arrest. Hanson is also arrested without incident. Federal agents then surround the ranch with over 100 agents. Six Freemen voluntarily leave the compound; 20 or more heavily armed Freemen remain inside the ranch, along with several children, and a standoff between the Freemen and the FBI begins. (Mark Pitcavage 5/6/1996; Billings Gazette 3/25/2006) A lawyer who visited a Freemen residence in the fall of 1995 recalls seeing guns such as AR-15 assault rifles, shotguns, and hunting rifles in every corner, and gas masks hanging from the doors. Authorities believe that the Freemen ensconsced in the ranch house have those weapons and more besides. (Worthington 4/19/1996)
Tactics Very Different from Ruby Ridge, Waco - US Attorney Sherry Matteucci says that federal authorities are seeking eight other people who are not in custody in the Freeman case, including Rodney Skurdal, who has been at large since a warrant for his arrest was issued in March 1995. Skurdal is the de facto leader of the Freemen holed up inside the ranch. The FBI says it is going to great lengths to ensure that this standoff does not end badly, as previous confrontations have in Ruby Ridge, Idaho (see August 31, 1992), and Waco, Texas (see April 19, 1993). “The FBI has gone to great pains to ensure that there is no armed confrontation, no siege, no armed perimeter, and no use of military assault-type tactics or equipment,” says Attorney General Janet Reno. “The FBI is trying to negotiate a peaceful solution.” The FBI says the confrontation is not a “siege,” as two of the three roads leading out of the Freeman compound are not blocked. Matteucci says authorities believe there are women and children among the besieged Freemen, but will not speculate as to the Freemen’s numbers or composition. FBI Director Louis Freeh decides at the outset not to use overt military tactics, as was done at both Ruby Ridge and Waco. Agents and law enforcement officials on the scene do not wear camouflage or black uniforms, but civilian clothes, and no armored personnel carriers are brought in. The FBI’s quasi-military Hostage Rescue Team (HRT) is heavily supplemented by trained negotiators and “profilers.” Instead of snipers, the FBI installs video surveillance cameras on a microwave tower leading into the farm, as well as extensive audio surveillance equipment. No perimeter is established, only roads leading into the ranch are blocked, and many people are allowed to drive in and out of the farm after being stopped and questioned by FBI or law enforcement agents. (Days after the arrests, the Freemen themselves will block the county road in front of their farm with a barbed wire barricade.) The HRT does not manage the standoff, as it did in Waco; instead, the FBI’s Critical Incident Response Group is in charge. The FBI agent in charge is Robert “Bear” Bryant, an assistant FBI director who in 1988 participated in the Marion, Utah, siege of a group of armed religious zealots that ended peacefully. Local police block media access to the farm, allegedly fearing violence against journalists. The FBI and the various law enforcement agencies establish an operations center at the Jordan county fairgrounds, with vehicles, command post trailers, and even an airstrip. The FBI sets up a dedicated telephone line into the farm for family members, and cuts the other phone lines. Jim Pate of Soldier of Fortune magazine, who met the Freemen leaders last year, warns that the confrontation could easily become violent. Lynn Davis of the Montana Human Rights Network agrees. “They haven’t shot anybody, but they’ve held people at gunpoint,” she says. “They’ve threatened. I’ve had two calls in the past week threatening my life, my children. Phone calls to both my home and office.” (CNN 3/28/1996; Worthington 4/19/1996; Mark Pitcavage 5/6/1996)
'Sad, Middle-Aged Men' - Nick Murnion, the Garfield County attorney and a lifelong resident of Jordan, says of the Freemen, “It’s like they’re brainwashed.” The Freemen represent maybe one percent of the town, Murnion says, but “they are causing misery for the whole county.” A Jordan resident who asks to remain anonymous says: “We’re tore up about it. A lot of us have family out there.” She says that the Freemen have rejected everyone who does not share their beliefs, even family members. “If we’re not with them, we’re against them,” she says. (Kenworthy and Kovaleski 4/1996) Matthew Sisler, the lawyer who visited the Freemen last year, has a somewhat different view. When he saw the group of heavily armed men, he says he did not fear them: “What we saw was a bunch of sad, middle-aged men who had lost their homes, who had not paid loans back or taxes, and wanted someone to blame.” (Worthington 4/19/1996)