This page can be viewed at http://www.historycommons.org/entity.jsp?entity=manouchehr_mottaki_1

Manouchehr Mottaki was a participant or observer in the following events:

August-September 2005: US Uses Laptop Evidence to Convince IAEA to Recommend Sanctions against Iran

The International Atomic Energy Agency (IAEA) is readying a vote on whether to recommend that the UN Security Council impose sanctions against Iran over that nation’s nuclear weapons program. The Bush administration, as part of its campaign to pressure the IAEA to vote for such a recommendation, briefs the president of Ghana, along with officials from Argentina, Sri Lanka, Tunisia, and Nigeria, all Security Council members, on its findings on Iran’s nuclear program derived from a laptop computer that contains evidence of Iran’s nuclear experiments (see Summer 2004). The briefing, actually a slide show, contains excerpts of the documents contained on the laptop. The US also presents a “white paper” containing summaries of the findings from the documents to another group of nations; the white paper contains no classified evidence and no mention of Iran’s purported attempts to develop a missile capable of deploying a nuclear weapon, but instead uses commercial satellite photos and economic analysis to argue that Iran has no need for nuclear power and has long hidden its nuclear ambitions. The white paper was prepared by analysts from the Los Alamos National Laboratory and the Pacific Northwest National Laboratory on behalf of the State Department. The paper does contain extensive details about some of Iran’s previously hidden nuclear sites. Most foreign officials are unimpressed. “Yeah, so what?” says one European expert who heard the briefing. “How do you know what you’re shown on a slide is true given past experience?” Nevertheless, the presentation is effective; on September 24, the IAEA votes 22 to 1 to adopt a resolution against Iran, with 12 countries, including China and Russia, abstaining. The resolution cites Iran for “a long history of concealment and deception” and its repeated failure to live up to its obligations under the Nuclear Nonproliferation Treaty, which it signed in 1970. The resolution says Iran may now be considered for sanctions by the Security Council. Iran’s foreign minister, Manouchehr Mottaki, denounces the resolution as “illegal and illogical” and the result of a “planned scenario determined by the United States.” The IAEA will decide whether to send the recommendation to the Security Council in November. It is by no means certain that the Council will adopt the recommendation, as two countries rotating onto the Council, Cuba and Syria, are almost certain to refuse to bow to US pressure. And the IAEA itself is not wholly convinced of the accuracy of the documents, given the US’s refusal to allow the agency to examine the documents. IAEA chief Mohamed ElBaradei says he is bound to “follow due process, which means I need to establish the veracity, consistency, and authenticity of any intelligence, and share it with the country of concern.” In this case, ElBaradei says, “That has not happened.” (Broad and Sanger 11/13/2005) 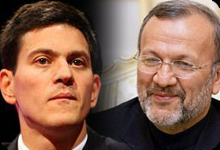 David Miliband (L), Manouchehr Mottaki (R). [Source: Press TV]Iranian Foreign Minister Manouchehr Mottaki criticizes ongoing talks between British officials and the Taliban in Afghanistan, characterizing them as the wrong approach. “Such moves indicate the continuation of the wrong policies which will only strengthen the Taliban and undermine Afghanistan’s government,” he says at a meeting with his British counterpart David Miliband in New York. He also slams Britain’s counter-narcotics efforts, pointing out that the production of narcotics has been increasing in Afghanistan despite British presence in areas of the country central to opium production, such as Helmand province. (Press TV 10/2/2007)

Responses from outside the White House (see December 3, 2007) to the newly released National Intelligence Estimate (NIE) on Iran, which states that Iran shut down its nuclear weapons program in 2003 (see December 3, 2007), are largely marked by relief that the US will now probably take a less aggressive position on Iran. Iranian foreign minister Manouchehr Mottaki says he welcomes the US move to “correct” its previous assertions, adding: “It’s natural that we welcome it when those countries who in the past have questions and ambiguities about this case… now amend their views realistically. The condition of Iran’s peaceful nuclear activities is becoming clear to the world.” However, a statement from the Israeli government says that Israel believes Iran is still working on developing nuclear weapons. (Tran and Jeffery 12/4/2007) Congressional lawmakers on both sides of the aisle say that the NIE has removed much of the immediacy from the possibility of US military intervention in Iraq. “[I]f nothing else, the urgency that we have to attack Iran, or knock out facilities” is no longer there, says Senator Chuck Hagel (R-NE). “I don’t think you can overstate the importance of this.” Senate Majority Leader Harry Reid (D-NV) says that, in light of the new intelligence report, the White House should adjust its policy and pursue “a diplomatic surge” to engage with Iran. Reid suggests that the administration “[f]ollow the Ronald Reagan theory of diplomacy.… What did Ronald Reagan do? He started his diplomats working with the evil people in the Soviet people, as he referred to, to work something out. And he did. He met with the leaders of the Soviet Union he didn’t particularly like. And that’s what we should be doing with Iran. We should be having a surge of diplomacy with Iran. And based upon this, I think it would be a pretty good idea.” (Think Progress 12/3/2007; Tran and Jeffery 12/4/2007) Jay Rockefeller (D-WV), the chairman of the Senate Intelligence Committee, says, “The key judgments show that the intelligence community has learned its lessons from the Iraq debacle. [The community] has issued judgments that break sharply with its own previous assessments, and they reflect a real difference from the views espoused by top administration officials.” (Linzer and Warrick 12/4/2007)

January 26, 2009: US to Engage in ‘Direct Diplomacy’ with Iran, Seek Engagement Concerning Afghanistan 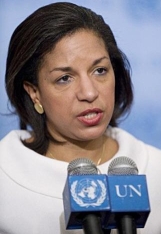 Susan Rice, speaking at the UN. [Source: Agence France-Presse]The newly named US ambassador to the United Nations, Susan Rice, says that the Obama administration will reverse years of Bush administration policies and engage in “direct diplomacy” with Iran. Such direct diplomatic efforts have not been tried with Iran since before the 1979 Iranian revolution (see February-November 4, 1979), when Iranian radicals captured 52 Americans and held them hostage for well over a year (see November 4, 1979-January 20, 1981). (Associated Press 1/26/2009) Israel’s Arutz Shiva calls the announcement a “not-unexpected bombshell.” (Ratzlav-Katz 1/26/2009)
Iran Open to Engagement - Iranian Foreign Minister Manouchehr Mottaki says Iran is “ready for new approaches by the United States.” Mottaki adds that Iran would consider the idea of allowing the US to open a diplomatic office in Tehran. The last US diplomatic office was closed in 1979.
US Still 'Deeply Concerned' about Iran's Nuclear Program - Rice says that Iran must meet UN Security Council demands to suspend uranium enrichment before the US will be willing to discuss its nuclear program. “The dialogue and diplomacy must go hand in hand with a very firm message from the United States and the international community that Iran needs to meet its obligations as defined by the Security Council,” Rice says. “And its continuing refusal to do so will only cause pressure to increase.” Rice says the US remains “deeply concerned about the threat that Iran’s nuclear program poses to the region, indeed to the United States and the entire international community.” She adds, “We look forward to engaging in vigorous diplomacy that includes direct diplomacy with Iran, as well as continued collaboration and partnership” with the other four permanent members of the Security Council—Britain, China, France and Russia—as well as Germany.
NATO: Iran Must Be Included in Decisions Regarding Afghanistan - NATO Secretary General Japp de Hoop Scheffer says that Iran must be part of the engagement process of escalating the war in Afghanistan. “We need a discussion that brings in all the relevant players: Afghanistan, Pakistan, India, China, Russia—and yes, Iran,” he says. “We need a pragmatic approach to solve this very real challenge.” Bush officials have long sought to isolate Iran from having any influence over the events in Afghanistan, even though its ruling Shi’ite theocracy has long opposed Afghanistan’s Taliban. (Associated Press 1/26/2009; Ratzlav-Katz 1/26/2009)
Clinton: 'New, Perhaps Different Approach' - Secretary of State Hillary Clinton says: “Obviously, the incoming administration views with great concern the role that Iran is playing in the world, its sponsorship of terrorism, its continuing interference with the functioning of other governments, and its pursuit of nuclear weapons. There is an ongoing policy review that the Obama administration has undertaken, but… our goal will be to do everything we can, pursue through diplomacy, through the use of sanctions, through creating better coalitions with countries that we believe also have a big stake in preventing Iran from becoming a nuclear weapon power, to try to prevent this from occurring. We are not taking any option off the table, at all. But we will pursue a new, perhaps different approach that will become a cornerstone of what the Obama administration believes is an attitude towards engagement that might bear fruit.” She says that the US continues to view an Iranian nuclear program as “unacceptable.” (Ratzlav-Katz 1/26/2009)