This page can be viewed at http://www.historycommons.org/entity.jsp?entity=marcella_fierro_1

Marcella Fierro was a participant or observer in the following events:

September 12, 2001: Virginia Chief Medical Examiner in ‘Tug of War’ Over Who Should do Autopsies of Pentagon Victims 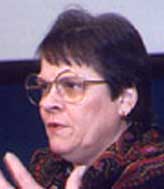 Dr. Marcella Fierro [Source: Ernie Branson]Virginia Chief Medical Examiner Dr. Marcella Fierro, believing that state forensic pathologists have jurisdiction over the Pentagon’s land, reassigns staff from three other regional offices to the Northern Virginia office in order to conduct postmortem examinations on victims of the Pentagon attack. However, following what the Washington Post calls a “behind-the-scenes tug of war,” after FBI and Defense Department officials meet with her they instead opt to conduct forensic and mortuary activities at Defense Department facilities. Fierro requests and later receives a letter from Attorney General John Ashcroft relieving her department of its responsibilities. (Goldstein 9/13/2001; US Department of Health and Human Services 7/2002, pp. A-47