This page can be viewed at http://www.historycommons.org/entity.jsp?entity=marie_diamond_1

Marie Diamond was a participant or observer in the following events:

Republican presidential candidate Newt Gingrich (R-GA) issues accusations that Americans on government aid programs are in many cases wasteful drug users who use their aid money to go on lavish vacations. Gingrich, riding a surge of popularity as the Iowa caucuses approach, calls President Obama “the food stamp president” during his stump speeches. In an appearance in Council Bluffs, Iowa, Gingrich says: “Remember, this is the best food stamp president in history. So more Americans today get food stamps than before. And we now give it away as cash—you don’t get food stamps. You get a credit card, and the credit card can be used for anything. We have people who take their food stamp money and use it to go to Hawaii. They give food stamps now to millionaires because, after all, don’t you want to be compassionate? You know, the Obama model: isn’t there somebody you’d like to give money to this week. That’s why we’re now going to help bailout Italy because we haven’t bailed out enough people this week, the president thought let’s write another check. After all, we have so much extra money.” The nonpartisan fact-checking entity PolitiFact calls Gingrich’s accusations complete lies. The “food stamp program,” known as the Supplemental Nutrition Assistance Program (SNAP), has very strict guidelines about what can and cannot be bought with federal aid dollars. Except for very limited exceptions, SNAP recipients cannot use aid money for restaurant meals or to buy anything other than groceries. SNAP funds cannot be used to buy alcoholic beverages. The “electronic benefits transfer” card, or EBT cards, are similar in appearance to credit cards, but have a very different function. EBT cardholders cannot use their cards to buy airline tickets, whether it be for Hawaiian vacations or anything else. PolitiFact doubts that any recipients would have enough funds to buy such tickets in the first place; the average monthly SNAP benefit is $134 per person. Julia Isaacs of the Brookings Institution says, “There is undoubtedly some illegal bartering of EBT cards—though I understand trafficking in EBT cards is less than under the old food stamps—but I am having trouble imagining how you could barter an EBT card for an airplane ticket.” PolitiFact notes that Gingrich’s claims may have come from a recent news broadcast in St. Louis, which found that some Missouri SNAP recipients spent $2,737 on food in Hawaii in January 2011. The money, though spent out of state, was spent on legitimate goods such as groceries. The amount was .07 percent of the total money allocated to SNAP residents in Missouri for January 2011. And the Missouri beneficiaries had legitimate reasons to be in Hawaii—some of them were members of the military transferred to new duty bases, for example. If the Missouri story is the source of Gingrich’s claims, PolitiFact notes, then Gingrich completely misrepresented the facts of the story. As far as the “food stamps for millionaires” claim, anyone who earns over 130 percent of the poverty line cannot receive benefits. No such beneficiaries have been identified, and if they do exist, they are breaking the law. Michael Wiseman of George Washington University says, “I would challenge Newt Gingrich to find a millionaire in annual income who gets on food stamps legally.” PolitiFact says that Gingrich’s claims are “so ridiculous” that the researchers thought for a time that he might be joking. Think Progress reporter Marie Diamond calls Gingrich’s claims “absurd.” At a recent campaign event in Iowa, citizen Don Brantz confronted Gingrich, saying: “You don’t always tell the truth, Mr. Gingrich, and that food stamp thing is one of them. Iowa already has a computer system. We do not pay money so the people on food stamps can buy beer and anything else. It’s a very specific thing.” (Diamond notes that Gingrich is a frequent world traveller, taking lengthy vacations in luxury spots around the world. In one instance, he told reporters that after taking a luxury cruise in Greece, he came away with a deeper understanding of the European financial crisis.) (St. Petersburg Times 12/1/2011; Diamond 12/2/2011; Khan 1/2/2012) MSNBC talk show host Ed Schultz will say that Gingrich, like fellow Republican candidate Rick Santorum (R-PA), “is also quick to connect programs like food stamps to the African-American community.” Schultz’s guest, author and radio host Michael Eric Dyson, says: “I don’t think we need Newt Gingrich’s pedagogy in the NAACP. I think this is condescension at its most poignant. And, as with Rick Santorum, when you have pet Negro causes, you tend to treat Negros like pets.” New York Times columnist Charles Blow will say of Gingrich’s remarks that “this sort of racial pandering is exactly what happens at this point in a race.” Blow calls Gingrich’s remarks “extreme, very racist.” (Byers 1/6/2012) 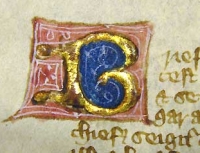 An illuminated letter from the Magna Carta. [Source: University of Maine at Farmington]Three freshman New Hampshire Republican House members submit a bill that would require all new legislation proposed in the New Hampshire Congress to source itself in the Magna Carta, the English declaration of rights written in 1215. Bob Kingsbury (R-Laconia), Tim Twombly (R-Nashua), and Lucien Vita (R-Middleton) write a bill that consists of the following single line: “All members of the general court [the New Hampshire legislature] proposing bills and resolutions addressing individual rights or liberties shall include a direct quote from the Magna Carta which sets forth the article from which the individual right or liberty is derived.” Most legal authorities recognize that the Magna Carta, compiled of 63 demands laid down by feudal barons to England’s King John, is one of the sources of inspiration for the US Constitution, but consider it quite outdated for modern use. Some of the Magna Carta’s demands are: “No widow shall be compelled to marry, so long as she wishes to remain without a husband”; “We shall straightway return the son of Llewelin and all the Welsh hostages.… We shall act towards Alexander King of the Scots regarding the restoration of his sisters”; and, “If anyone who has borrowed a sum of money from Jews dies before the debt has been repaid, his heir shall pay no interest on the debt for so long as he remains under age.” Kingsbury says he is primarily thinking of bills concerning the judicial system, and cites the Magna Carta’s clause that states that “no freeman” shall be imprisoned or harmed “save by the lawful judgment of his peers or by the law of the land.” New Hampshire Democratic Party spokesman Ray Buckley says he is “mostly speechless,” and adds: “I appreciate all the hard work the Republican legislators are putting into the effort to make them look like extremists. Saves us the trouble.” Kingsbury tries to downplay the importance of the legislation, saying its primary intent is to honor the Magna Carta’s upcoming 800-year anniversary in 2015. Vita admits that he needs to “bone up” on the content of the charter, but adds, “it’s a document that still functions.” He says the Magna Carta bill is similar to bills in the US Congress requiring all legislation to cite constitutional authority. “This is a little bit older than the Constitution, but the same thought is there,” Vita says. Kingsbury says that concerns of legal problems deriving from any such requirement are “interesting,” adding, “Everything has an analog, everything has an origin, and this is part of the origin of what we have in our country.” Twombly says “no way in heck” was his intention in backing the bill to prevent progressive civil rights legislation from being introduced. “That’s not my thought whatsoever,” he says, acknowledging that the Magna Carta does not address issues like gay rights and abortion. “Our society has changed a lot since then. There are issues that need to be resolved that weren’t a problem years ago.” Kingsbury says even if the law passes, no punitive measures would entail if legislation did not actually cite the Magna Carta. “It’s a recommendation that would be nice to be followed,” he says. (Langley and Spolar 12/24/2011) Think Progress reporter Marie Diamond writes of the bill: “Conservatives have long prided themselves on being constitutional ‘purists’ who want to strip government down to the basic form they say was laid out in the country’s founding document. But requiring textual justification from another country’s founding document, which has no legal history or authority in the US, is a curious extension of that principle.” (Diamond 1/4/2012)

January 1-3, 2012: Republican Presidential Candidate Says He Will Not Improve African-Americans’ Lives ‘by Giving Them Someone Else’s Money’; Controversy over Candidate’s Word Choice Ensues

Main Street Alliance logo. [Source: Alliance for a Just Society]According to a survey conducted by three business groups, two-thirds of small-business owners believe that the Citizens United decision (see January 21, 2010) is bad for small businesses. The survey of 500 small business leaders is released by the American Sustainable Business Council, the Main Street Alliance, and the Small Business Majority. Sixty-six percent of respondents say that the Citizens United decision has hurt business, while only 9 percent view it favorably. Eighty-eight percent of small business owners hold a negative view of the role money plays in politics, and 68 percent view it very negatively. David Levine of the American Sustainable Business Council says: “As we approach the two-year anniversary of the Citizens United case, the verdict is loud and clear: the ruling hurts the small businesses that we need to be strong for economic recovery. Business owners are frustrated because they have to compete with big business bank accounts to be heard, and they are fighting back. More than 1,000 business owners have joined ASBC’s Business for Democracy campaign to fight for a constitutional amendment that overturns this decision” (see November 23, 2010, November 1, 2011, November 18, 2011, and December 20, 2011). Small Business Majority founder and CEO John Arensmeyer says: “America’s entrepreneurs feel corporations have an outsized role and say in politics—to the detriment of the small business community. They’re looking for a level playing field, and as the country’s primary job creators, they should have it.” Melanie Collins, who leads the Maine Small Business Coalition and the Main Street Alliance, says: “Small business owners aren’t stupid. We know who wins when corporate heavy hitters can spend all the money they want, as secretively as they want, to influence our country’s elections—and it’s not us. The Citizens United decision stacked the deck against small businesses. We’ve got to unstack that deck.” (The Main Street Alliance 1/18/2012

) Marie Diamond of the liberal news Web site Think Progress agrees, writing: “Small business has been hailed by legislators of both parties as the undisputed engine of economic growth. Fifty-one percent of Americans are employed by small business, and small businesses generate 70 percent of new private sector jobs. But they increasingly find their needs ignored by lawmakers who favor corporate contributors with deeper pockets.” (Diamond 1/18/2012)