This page can be viewed at http://www.historycommons.org/entity.jsp?entity=mark_rose

Mark Rose was a participant or observer in the following events: 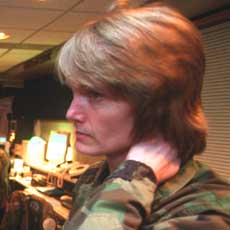 Colin Scoggins, the military liaison at the FAA’s Boston Center, later recalls: “I was giving NEADS accurate location information on at least five instances where AA 11 was, yet they could never identify him.… I originally gave them an F/R/D, which is a fix/radial/distance from a known location; they could not identify the target. They requested latitude/longitudes, which I gave them; they still could not identify the AA 11.… I gave them 20 [miles] south of Albany heading south at a high rate of speed, 600 knots, then another call at 50 south of Albany.” (Griffin 2007, pp. 47)

Master Sergeant Kevin Foster and Staff Sergeant Mark Rose, also working at NEADS this morning, later complain about their inability to locate the hijacked planes. After being informed of the first hijacking, reportedly: “As they had practiced countless times before, the NEADS team quickly began searching their [radar] screens for the plane. Because they had been informed its transponder was off, they knew to look for a tiny dash instead of the usual dot. But radar systems also use such lines to indicate weather patterns, so NEADS personnel began urgently clicking their computer cursors on each stray line to see if information indicating an aircraft would appear.” Yet, after receiving further calls indicating more hijackings, “the inability to find the hijacked planes on the radar, despite their best efforts, was difficult.” According to Foster, “We were trying to find the tracks, and not being able to was very frustrating.” (Cooper 8/5/2004)

NEADS Staff Sergeant Larry Thornton will recall: “Once we were called by the FAA, we could find split-second hits on what we thought we were looking for. But the area was so congested and it was incredibly difficult to find. We were looking for little dash marks in a pile of clutter and a pile of aircraft on a two-dimensional scope.” Each fluorescent green pulsating dot on their radar scopes represents an airplane, and there are thousands currently airborne, especially over the busy northeast US. (Filson 2003, pp. 56)