This page can be viewed at http://www.historycommons.org/entity.jsp?entity=martin_gilbertson_1

Martin Gilbertson was a participant or observer in the following events: 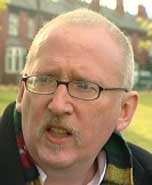 Martin Gilbertson. [Source: BBC]On September 12, 2001, Martin Gilbertson attends a party in Beeston, a neighborhood in Leeds, Britain, where a group of Muslim youths are celebrating the 9/11 attacks that took place the day before. Gilbertson is introduced to three men who run the Iqra Islamic bookshop and some related establishments in Beeston. Their leader appears to be Martin McDaid, a former Royal Marine who converted to Islam and changed his name to Adbullah Mohammed. Gilbertson, a former Hell’s Angel and rock and roll roadie, is not Muslim, but McDaid and the others ask if he can instruct them in website production. Over the next two years, Gilbertson ends up getting paid to do the production work for them himself, as well as repairing their computers and setting up encryptions to protect their computers from being monitored.
Gets to Know 7/7 Bombers - Two of the future 7/7 London bombers, Mohammad Sidique Khan and Shehzad Tanweer, live in Beeston and regularly visit the Iqra bookshop. Gilbertson comes to know them well. But after spending time editing video footage meant to serve as radical Islamist recruiting propaganda DVDs, he becomes alarmed at the content and decides to go to the police.
Informs Police - In October 2003, he goes to the local police to warn them about the circle of radical Islamists he is working for. For instance, he warns that McDaid is “ranting and raving” about “jihad.” He is told to send his material to the anti-terrorist squad at the West Yorkshire police headquarters instead. So he sends them a package containing some of the DVDs he helped make, a contact number, a list of names (including Tanweer and Khan), and details about their e-mail traffic. He leaves the area some months later and loses contact with the group. He never hears back, until he goes to the police again shortly after the 7/7 bombings.
Police Fail to Say If They Were Informed - A West Yorkshire police spokesman will later say: “It’s going to be almost impossible to trace what happened to a specific item of mail. We don’t have an anti-terrorist squad, and there’s no way of saying to where it might have gone from the mailroom. We get all sorts of material on extremist groups—but it’s impossible to say whether this made its way into the intelligence system, whether it was discounted as low-level intelligence or whether it was acted upon in some way.”
Talk about Dying for the Cause - Gilbertson will later say that he did not hear any specific plans for suicide bombing. But an associate of his will later say: “Some people made it clear they had no objection to dying for their cause. They didn’t see it as suicide, and didn’t talk much about martyrdom. They saw the suicide bomb as the only weapon they had in a war in which they were outgunned and overpowered.” (Vulliamy 6/24/2006)
Police Raid - Gilbertson will later tell the BBC: “I know that other people were talking to the police at the same time. There were many people who were voicing their concerns about what was happening in Beeston. But nobody would listen.” But he also believes that police raided the Iqra bookshop soon after he mailed his warning. He says that in early 2004, he was asked to repair a laptop belonging to one of the people he had warned the police about, and was told the laptop had been damaged after being seized by police. He says that he thought, “Oh, the police listened to me.” (BBC 5/9/2007)