This page can be viewed at http://www.historycommons.org/entity.jsp?entity=mary_ellen_emmons_1

Mary Ellen Emmons was a participant or observer in the following events: 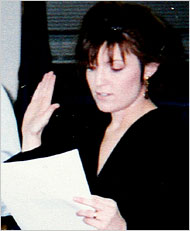 Sarah Palin, taking the oath of office as mayor, 1997. [Source: New York Times]Wasilla, Alaska, City Council member Sarah Palin becomes Mayor of Wasilla after running a groundbreakingly negative political campaign (see Mid and Late 1996). In her term, she focuses on town development and personal politics. Palin supporters will say that she helps Wasilla develop from a small backwater into a fast-growing suburb, almost doubling its population during her term and bringing in large “box stores” such as Target. Critics will say that she leads the overdevelopment and exploitation of a town that was largely homesteaded farmland before her arrival. Palin weathers a brief attempt at a recall, in part because of town leaders’ fears of retaliation: She quickly becomes known for using her position for exacting revenge against her personal and political enemies. Council member Anne Kilkenny, a Democrat, will later remember Palin’s efforts to get books banned from the Wasilla library. “They were somehow morally or socially objectionable to her,” Kilkenny will recall. Town librarian Mary Ellen Emmons, later described by former mayor John C. Stein as “aghast” at Palin’s requests, resists Palin’s efforts at what Kilkenny will call “censorship,” and Palin promptly fires her. After residents protest, Palin relents and allows Emmons to retake the position, and drops her call to ban the library books; in late 1996, Palin tells a local reporter that her talk of banning books was merely “rhetorical.” Once in office, Palin demands that many of Stein’s supporters and appointees in city government resign, an unprecedented event in town history. She forces the public works director, city planner, museum director, and others to resign, and fires Police Chief Irl Stambaugh, who will lose a wrongful termination lawsuit in 2000. (Stambaugh will later say that part of the reason why Palin fires him is because she tells him “the NRA [National Rifle Association, a powerful Palin supporter] didn’t like me and that they wanted change.” Palin also informs Stambaugh that he “stared” at her during their meetings and attempted to be “physically intimidating.”) Palin packs city government with figures from the area Republican Party, sometimes including wives and relatives, and responds to a question about running city government without experienced government personnel by saying: “It’s not rocket science. It’s $6 million and 53 employees.” She attempts to replace two council members with persons she knows, though the mayor does not have that legal power. She issues an edict forbidding city employees from talking to anyone in the press without her authorization. Victoria Naegele, the editor of the Mat-Su Valley Frontiersman, will recall: “It was just things you don’t ever associate with a small town. It was like we were warped into real politics instead of just, ‘Do you like Joe or Mary for the job?’ It was a strange time and [the Frontiersman] came out very harshly against her.” Going against her stance on cutting taxes and restricting spending, Palin forces through a half-cent raise in the local sales tax to pay for a $15 million sports complex that hosts, among other local teams, a junior league hockey team, but the city will later have to pay more than $1.3 million to settle an ownership dispute over the site. And again going against her stated distaste for taking federal money, she makes frequent trips to Washington to lobby for federal funds for local rail projects and a mental health center, among other initiatives. In 1999, Palin will become president of the Alaska Conference of Mayors. (Kizzia 10/23/2006; Yardley 9/2/2008; Thornburgh 9/2/2008; Armstrong and Bernton 9/7/2008; MacGillis 9/14/2008) Palin will use her second and final term as mayor as a springboard to higher office (see January 2000 - 2002).