This page can be viewed at http://www.historycommons.org/entity.jsp?entity=mehmet_alagic_1

Mehmet Alagic was a participant or observer in the following events: 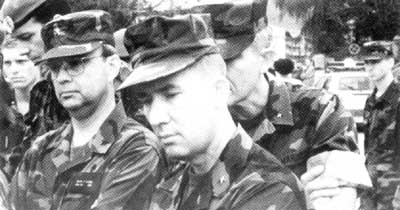 Brigadier Gen. Michael Hayden (left, with glasses), US Marine Corps Gen. David Mize (front and center), and US Marine Corps Lt. Gen. Edward Hanlon Jr. (behind Mize) in Gornji Vakuf, Bosnia, on September 4, 1994. [Source: Paul Harris] (click image to enlarge)US ambassador Charles Thomas; Assistant Secretary of State for Europe Richard Holbrooke, his deputy Robert Frasure, head of intelligence for US European Command Brigadier Gen. Michael Hayden, US Air Force Gen. Charles Boyd, US Marine Corps Gen. David Mize, and US Marine Corps Lt. Gen. Edward Hanlon Jr., meet with the Muslim Bosnian army commander for Central Bosnia, Mehmet Alagic, in the town of Gornji Vakuf. The US group also visits Mostar, which is also controlled by the Bosnian Muslims. The Pentagon claims the US diplomats are there to familiarize themselves with the situation on the ground and the generals “just happened to be along,” but in appears in fact these meetings are part of a US effort to help the Croats and Muslims work together in upcoming offensives. Following this visit, US “logistics advisers” move into key locations throughout Bosnia, including the UN-controlled Tuzla airport. US Special Forces help build a secret airstrip in Visoko, central Bosnia, to land heavy transport aircraft (see Late 1994-Late 1995), and mysterious flights begin arriving at the Tuzla airports a few months later (see February-March 1995). (Vulliamy 11/20/1994; Harris 12/3/1995) Hayden will later become head of the NSA and then head of the CIA.