This page can be viewed at http://www.historycommons.org/entity.jsp?entity=melissa_huet_1

Melissa Huet was a participant or observer in the following events: 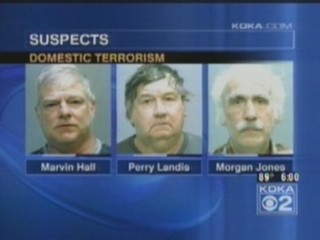 A screenshot of a local Pittsburgh news broadcast showing three of four suspects arrested on charges of domestic terrorism. [Source: FireDogLake (.com)]The FBI arrests four Pittsburgh-area people on suspicion of plotting terrorist attacks. Marvin Hall of Rimersburg, Perry Landis of the Clarion area, Morgan Jones of Lucinda, and Melissa Huet, presumably of Pittsburgh, are arrested after authorities learned they were stockpiling a cache of weapons with plans to target local government buildings. Two more suspects will be arrested days later, including Bradley T. Kahle (see June 8, 2008). Many of the six have ties to the right-wing militia movement; Landis is sergeant-at-arms of the Brookville Tiger Militia in Jefferson County. In a raid, the FBI confiscates hundreds of weapons, including hunting rifles, a Romanian assault rifle, 16 homemade bombs, homemade rockets, a homemade flame thrower, blasting caps, and cannons. The four made threats to blow up government buildings and carry out other acts of domestic terrorism. They face numerous federal firearms charges as well as charges of illegal sales, manufacture, and transport of weapons. The raid is the culmination of three years of investigations, including the insertion of undercover agents inside the operation. Federal agents have raided other area compounds over the last two days in the Clarion area; one of these raids led to Kahle’s arrest. Landis has told undercover agents that he intended to assassinate Governor Ed Rendell (D-PA). David Neiwert, a progressive reporter and blogger who is an expert on right-wing terrorism, later writes of the dearth of mainstream media coverage: “Imagine, if you will, how this would have been handled were these folks of Arab extraction or believers in radical Islamist ideology instead of your garden-variety far-right American ideology. CNN would have the cameras and reporters there, NBC would host an hour discussing the threat, and [conservative bloggers] Michelle Malkin and Little Green Footballs’ Chuck Johnson would [be] bouncing around the walls of their rubber rooms even more frenetically than usual amid shouts of ‘Jihad!!!!’” (KDKA-TV 6/9/2008; David Neiwert 6/10/2008; Cato and Pfister 6/12/2008; Southern Poverty Law Center 2011) Hall, Landis, Jones, and Huet will be convicted. (Hornick 3/10/2010)