This page can be viewed at http://www.historycommons.org/entity.jsp?entity=menachem_begin

Positions that Menachem Begin has held:

Menachem Begin was a participant or observer in the following events: 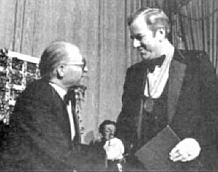 Menachem Begin and Jerry Falwell. [Source: Bibliotecapleyades (.net)]Israeli Prime Minister Menachem Begin seeks to expand his base of influence in the US. Israel has long enjoyed the support of liberal Democrats, so Begin begins reaching out to conservative American evangelicals who, in many cases, espouse anti-Semitic views (see February 1, 1972). But more important to Begin is the fact that these conservative Christians are becoming politically active and powerful. Begin seeks out conservative televangelist and political activist Jerry Falwell, who publicly views the birth of Israel as “the fulfillment of Biblical prophecy.” Falwell has often said that the friendship between the US and Israel is a cornerstone both of political stability in the Middle East and a matter of faith. Begin presents Falwell with the prestigious Jabotinsky Award, making Falwell the first non-Jew to ever receive the award. More tangibly, he also gives Falwell’s ministry a private jet. (Unger 2007, pp. 109)

Israeli prime minister Menachem Begin calls televangelist and nascent political ally Jerry Falwell (see 1980) and says: “Tomorrow you’re going to read some strange things about what we’re going to do. But our safety is at stake. I wanted you, my good friend, to know what we are going to do.” Israel is preparing to use US-provided F-16s to destroy Iraq’s Osirak nuclear reactor (see June 7, 1981). Begin is concerned that the US will object to Israel’s use of the aircraft for non-defensive purposes. Falwell tells Begin, “I want to congratulate you for a mission that [makes] us very proud that we manufactured those F-16s.” Many Reagan officials are not happy that Israel violated the agreement with the US over use of the warplanes, but even though Vice President Bush and Chief of Staff James Baker both believe that Israel should be punished, Begin has provided himself cover on the Christian right. (Unger 2007, pp. 109-110) 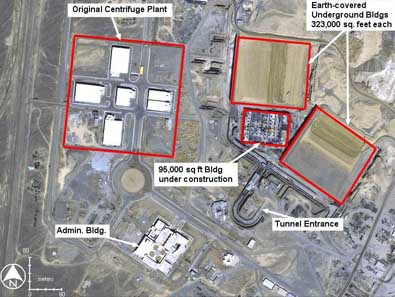 Osirak nuclear facility. [Source: GlobalSecurity.org] (click image to enlarge)On the order of Prime Minister Menachem Begin and after heated debate among Israeli leaders, Israeli warplanes strike the Osirak (also spelled Osiraq) Tammuz I nuclear plant at al-Tuwaitha near Baghdad, destroying it and dealing a severe setback to Iraq’s nuclear program. Israel claims it fears Iraq is building a nuclear weapon with which to strike it. Osirak is a French-made nuclear reactor, which is near completion but lacks any nuclear fuel, thereby raising no danger of any radioactive link. Ariel Sharon, concurrently Defense Minister and a proponent of the strike, later says, “This was perhaps the most difficult decision which faced any [Israeli] government during all the years of the state’s existence.” The Israeli government states after the strike, “The atomic bombs which that reactor was capable of producing, whether from enriched uranium or from plutonium, would be of the Hiroshima size. Thus a mortal danger to the people of Israel progressively arose.… Under no circumstances will we allow an enemy to develop weapons of mass destruction against our people.” The reactor is slated to be completed by September, 1981, though it would be years before it could produce any nuclear-grade fissionable material. Iraq denies the reactor is developed to produce nuclear weapons, though the construction of the plant gives credence to claims that Iraq is more interested in building a weapon than generating electricity. (After the strike, Iraqi dictator Saddam Hussein says, “Any state in the world which really wants peace… should help the Arabs in one way or another to acquire atomic bombs,” giving further credence to suspicions that Hussein wanted to build a nuclear weapon.) The Israeli strike follows up a September 1980 raid on the Osirak facility by Iranian warplanes (see September 30, 1980). Publicly, Iran and Israel are dire enemies, but Israel has begun secretly selling US-made arms to Iran as a way to counterbalance the threat posed by Iraq (see 1981). (BBC 7/7/1981; Waas and Unger 11/2/1992; Institute for Strategic Studies 5/1995) In 1984, Brookings Institution fellow Lucien Vandenbroucke will write, “Ironically, Israel’s raid may prove to be a brilliant tactical success achieved at the expense of the country’s long-term interests. Certainly, the attack set Iraq’s nuclear program back several years. But the strike also ushered in a de facto Israeli claim to nuclear monopoly in the Middle East, a move that in the long run generally promises to encourage the larger Arab world on the nuclear path.… In the decision-making process, Israeli fears and the propensity to rely on worst-case analyses seem to have prevailed. The advocates of the strike focused on the unreasonable, rather than the reasonable, aspects of Iraqi behavior, and thus even a limited prospect that Iraq might soon acquire a nuclear bomb became more of a risk than they were prepared to accept.” (Vandenbroucke 10/1984)