This page can be viewed at http://www.historycommons.org/entity.jsp?entity=michelle_1

Michael Anne Casey was a participant or observer in the following events: 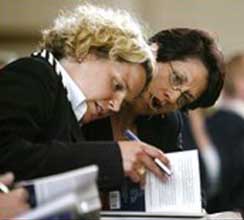 Victims’ family members Lorie Van Auken (right) and Kristen Breitweiser (left) are shocked to learn Tom Wilshire blocked a cable to the FBI about Khalid Almihdhar’s visa. [Source: Banded Artists]Doug Miller, an FBI agent assigned to Alec Station, the CIA’s bin Laden unit, reads CIA cables reporting that 9/11 hijacker Khalid Almihdhar has a US visa and drafts a cable to the FBI to inform it of this. The CIA obtained the information through a tap on Almihdhar’s phone in Yemen (see December 29, 1999) and by monitoring him as he passed through Dubai (see January 2-5, 2000) on his way to an al-Qaeda summit in Malaysia (see January 5-8, 2000).
Draft Cable - Miller writes that Almihdhar has a US visa (see April 3-7, 1999) and that the visa application states his destination is New York and he intends to stay for three months. The draft cable mentions the tap on Almihdhar’s phone, his planned travel to Malaysia, and the links between his phone and the 1998 East African embassy bombings (see 10:35-10:39 a.m., August 7, 1998 and October 4, 2001). It also says that the CIA has obtained photographs of Almihdhar and these will be sent separately. Miller asks the FBI for feedback resulting from an FBI investigation.
Blocked - Another CIA officer named Michael Anne Casey accesses Miller’s draft about an hour after he writes it. The cable is then blocked on the orders of the station’s deputy chief, Tom Wilshire, as a few hours after Miller drafts the cable Casey attaches a message to it saying, “pls hold off on [cable] for now per [Tom Wilshire].” (9/11 Commission 7/24/2004, pp. 502; US Department of Justice 11/2004, pp. 240

) Miller is also told, “This is not a matter for the FBI.” (Wright 2006, pp. 311)
'No Reason to Kill the Message' - Author James Bamford will later comment: “A potential terrorist and member of al-Qaeda was heading for the US, the FBI’s jurisdiction—its turf—and he [Miller] was putting the FBI on notice so it could take action. There was no reason to kill the message.” (Bamford 2008, pp. 19) Miller will later say he has no “rational answer” as to why the cable was blocked, but will speculate that Alec Station officers were annoyed he had encroached on their territory. (Stein 10/1/2008) Casey drafts a cable falsely saying that the information about Almihdhar’s visa has been shared with the FBI (see Around 7:00 p.m. January 5, 2000) and there will be a discussion the next day about whether the cable should be sent (see January 6, 2000). The Justice Department’s Office of Inspector General will later call the failure to pass the information to the FBI a “significant failure” but will be unable to determine why the information was not passed on. (US Department of Justice 11/2004, pp. 250

) The 9/11 Commission will know of the incident, but will relegate it to an endnote in its final report, omitting Wilshire’s role entirely. (9/11 Commission 7/24/2004, pp. 502) The CIA inspector general will falsely claim that the cable is not sent, “[a]pparently because it was in the wrong format or needed editing.” (Central Intelligence Agency 6/2005, pp. xv

Around 7:00 p.m. January 5, 2000: CIA Officer Sends out Cable with False Claim FBI Has Been Told of Hijacker Almihdhar’s US Visa

CIA officer Michael Anne Casey sends out a cable saying the information that 9/11 hijacker Khalid Almihdhar has a US visa has been sent to the FBI “for further investigation.” The cable does not state how the visa information was passed or by whom. Casey is with Alec Station, the CIA’s bin Laden unit. The cable, which is lengthy and summarizes information about Almihdhar and three other operatives planning an al-Qaeda summit in Malaysia, is sent to some overseas CIA stations, but not the FBI. (9/11 Commission 7/24/2004, pp. 502; US Department of Justice 11/2004, pp. 243

) In addition, as Casey blocked the relevant notification to the FBI on this day (see 9:30 a.m. - 4:00 p.m. January 5, 2000) and insists it not be passed the next day (see January 6, 2000), she must know the claim the information about Almihdhar’s visa had been passed is false. Casey will apparently lie about this cable to the Justice Department’s inspector general (see February 2004) and CIA Director George Tenet (see Before October 17, 2002 and Shortly Before April 30, 2007).

January 6, 2000: CIA Officer Says Information about 9/11 Hijacker Almihdhar Cannot Be Shared with FBI Because Next Al-Qaeda Attack Will Be in Southeast Asia

Mark Rossini. [Source: Fox News]Mark Rossini, an FBI agent on loan to Alec Station, the CIA’s bin Laden unit, protests in vain against a decision to deliberately withhold information about one of the future 9/11 hijackers, Khalid Almihdhar, from the FBI (see 9:30 a.m. - 4:00 p.m. January 5, 2000). One of his colleagues, Doug Miller, had tried to inform the FBI that Almihdhar had a US visa the day before, but had been blocked by a 29-year-old female CIA officer named Michael Anne Casey and the unit’s deputy chief, Tom Wilshire. According to author James Bamford, Rossini was “perplexed and outraged that the CIA would forbid the bureau’s notification on a matter so important.” Rossini will later say: “So the next day I went to her and said: ‘What’s with Doug’s cable? You’ve got to tell the bureau about this.’ She put her hand on her hip and said: ‘Look, the next attack is going to happen in Southeast Asia—it’s not the bureau’s jurisdiction. When we want the FBI to know about it, we’ll let them know. But the next bin Laden attack’s going to happen in Southeast Asia.’” (Bamford 2008, pp. 19-20) Rossini protests, saying, “They’re here!” and, “It is FBI business,” but to no avail. Even though he is an FBI agent, he cannot pass on notification to the bureau without permission from his superiors at Alec Station. (Stein 10/1/2008) Casey will be promoted after 9/11. (Mayer 2008, pp. 16) In the run-up to the 9/11 attacks, Wilshire will write an e-mail expressing his fear of an al-Qaeda attack in Southeast Asia, specifically Malaysia (see July 5, 2001), and will give this as a reason he does not communicate information about Almihdhar and his partner Nawaf Alhazmi to the FBI in May 2001 (see May 15, 2001). It will be alleged after 9/11 that the notification may be withheld to stop the FBI interfering with an illegal CIA-linked operation to monitor the hijackers in the US (see 2006 and After).

Before October 17, 2002: CIA Officer Apparently Lies to Director about Withholding of Hijacker Information before 9/11

A CIA officer who served with Alec Station, the CIA’s bin Laden unit, before 9/11 is interviewed by CIA Director George Tenet about a failure to pass on information to the FBI about one of the 9/11 hijackers, Khalid Almihdhar. Although information about Almihdhar’s US visa was not passed to the FBI, the officer, Michael Anne Casey, drafted a cable falsely stating that it had been passed (see Around 7:00 p.m. January 5, 2000). According to Tenet’s testimony to the 9/11 Congressional Inquiry (see October 17, 2002), Casey “believes she never would have written this cable unless she believes this had happened.” Tenet will be impressed with Casey, calling her a “terrific officer” at an open hearing of the inquiry. (New York Times 10/17/2002) However, it was Casey herself who blocked the cable, on the orders of her boss, Tom Wilshire (see 9:30 a.m. - 4:00 p.m. January 5, 2000). In addition, the day after she sent the cable falsely stating the information had been passed, she again insisted that the information not be provided to the FBI (see January 6, 2000). Casey will later repeat the same lie to the Justice Department’s inspector general (see February 2004).

A CIA officer who blocked notification to the FBI that Khalid Almihdhar had a US visa makes a number of false statements about the blocking in an interview with the Justice’s Department’s office of inspector general. The officer, Michael Anne Casey, was working at Alec Station, the CIA’s bin Laden unit, in 2000. She blocked a cable drafted by an FBI agent on loan to Alec Station named Doug Miller telling the FBI about Almihdhar (see 9:30 a.m. - 4:00 p.m. January 5, 2000), but then drafted a cable falsely stating the information had been passed (see Around 7:00 p.m. January 5, 2000) and insisted to Miller’s colleague Mark Rossini that the FBI not be informed the next day (see January 6, 2000). Instead of telling the inspector general why she blocked the initial cable and then drafted the cable with the false statement, Casey claims that she has no recollection of Miller’s cable, any discussions about putting it on hold, or why it was not sent. She also claims the language of the cable suggests somebody else told her the information about Almihdhar’s visa had been passed to the FBI, but cannot recall who this was. (US Department of Justice 11/2004, pp. 242-243

; Bamford 2008, pp. 19-20) The exact date of this interview is not known, although the inspector general discovered Miller’s cable in early February (see Early February 2004) and Miller and Rossini are interviewed around this time. Both men also falsely claim not to recall anything about the cable (see (February 12, 2004)).

According to former CIA Director George Tenet, he speaks to a “senior CIA officer” with knowledge of pre-9/11 intelligence failures, apparently in preparation for a book he is writing. They discuss the failure to inform the FBI that one of the hijackers, Khalid Almihdhar, had a US visa (see 9:30 a.m. - 4:00 p.m. January 5, 2000). The officer tells Tenet: “Once Almihdhar’s picture and visa information were received, everyone agreed that the information should immediately be sent to the FBI. Instructions were given to do so. There was a contemporaneous e-mail in CIA staff traffic, which CIA and FBI employees had access to, indicating that the data had in fact been sent to the FBI. Everyone believed it had been done.” (Tenet 2007, pp. 195) The claim that “everyone agreed” the information should be sent to the FBI is false, because two officers, deputy unit chief Tom Wilshire and Michael Anne Casey, specifically instructed two other people working at Alec Station, the CIA’s bin Laden unit, not to send it (see 9:30 a.m. - 4:00 p.m. January 5, 2000 and January 6, 2000). The “contemporaneous e-mail” was then written by Casey, who must have known the claim the information had been passed was incorrect (see Around 7:00 p.m. January 5, 2000). Casey later appears to have lied about this matter to Tenet (see Before October 17, 2002) and the Justice Department’s inspector general (see February 2004).

Two CIA analysts, Alfreda Frances Bikowsky and Michael Anne Casey, who were involved in pre-9/11 intelligence failures and torture are named publicly for the first time, at the website Boiling Frogs Post (BFP). Bikowsky, now apparently head of the CIA’s Global Jihad Unit, made a false statement to the 9/11 Congressional Inquiry and was later involved in some of the CIA’s most notorious abuses (see After March 7, 2003 and Before January 23, 2004). Casey deliberately withheld information about two 9/11 hijackers from the FBI in January 2000 (see 9:30 a.m. - 4:00 p.m. January 5, 2000 and January 6, 2000). BFP obtained the two names from a document posted in error at the website secrecykills.com, which was set up to support an audio documentary about the intelligence failures before 9/11 entitled Who Is Rich Blee? (note: Blee was the former boss of both analysts). Due to threats previously made against them by the CIA, the documentary’s producers, John Duffy and Ray Nowosielski, ask BFP to take down Casey’s name and BFP complies. However, Nowosielski will later name both women in an article posted at Salon. (Boiling Frogs Post 9/21/2011; O'Connor and Nowosielski 10/14/2011) The two identities were found using information previously made available about the two and from Google searches. Bikowsky’s name was found by searching State Department nominations for her middle name, which was released by the Associated Press earlier in the year. Duffy and Nowosielski found Casey after learning she was the child of a CIA officer and theorising (incorrectly, as they later learned) that her father could have been former CIA Director William Casey. Her name also appears in State Department nominations, where they found it. (O'Connor and Nowosielski 10/14/2011)