This page can be viewed at http://www.historycommons.org/entity.jsp?entity=mike_hayes_1

Mike Hayes was a participant or observer in the following events: 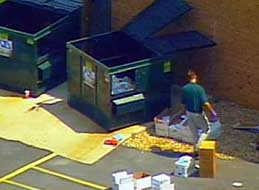 An FBI agent checking a dumpster near Steven Hatfill’s apartment. [Source: WUSA]In July 2002, anthrax attacks suspect Steven Hatfill is put under 24-hour surveillance. The surveillance comes after bloodhounds allegedly link Hatfill to the anthrax letters at some point in July. (This bloodhound evidence will be quickly debunked by the media, but apparently this does not dissuade the FBI (see August 4, 2002)). (Foster 9/15/2003) The surveillance is quite open and obvious at times. In December 2002, Hatfill alleges that a virtual caravan of unmarked vans and cars are keeping him under constant surveillance, following him on errands and to restaurants, and driving past his house with a video camera pointed out the window. He also believes that his telephone is being wiretapped. (Davis and Horrock 12/23/2002) In May 2003, Hatfill walks up to one of the agents following him attempts to videotape him. The agent drives into Hatfill and runs over his foot. Remarkably, the driver is not punished but Hatfill gets a five-dollar ticket for “walking to create a hazard.” Mike Hayes, a retired 20-year FBI agent specializing in surveillance, says to a reporter regarding the FBI’s behavior with Hatfill, “What you’re describing—really obvious surveillance—doesn’t make a lot of sense.” (Shane 5/20/2003) Shortly after the incident, USA Today reports, “FBI officials believe they can’t risk the embarrassment of losing track of Hatfill, even for a few hours, and then being confronted with more anthrax attacks.” Privately, Hatfill’s lawyer suggests that Hatfill could be outfitted with a satellite-guided tracking device and allow an FBI agent to stay with him at all times, but the FBI rejects the offer. (Willman 6/29/2008) The surveillance continues until late 2003 and is very intermittent after that. (Shane 7/21/2004) The FBI will later admit that this type of open surveillance of a suspect is against FBI guidelines. However, when the FBI’s focus turns to Bruce Ivins in 2007, they will use the same technique on him (see Autumn 2007-July 29, 2008).