This page can be viewed at http://www.historycommons.org/entity.jsp?entity=mirza_yusef_beg_1

Mirza Yusef Beg was a participant or observer in the following events: 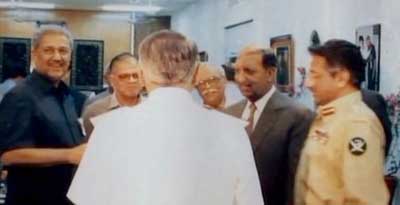 A. Q. Khan (left) and Pervez Musharraf (right). [Source: CBC] (click image to enlarge)After CIA Director George Tenet visits Pakistan and pressures the Pakistani government to take stronger action against the charity front Ummah Tameer-e-Nau (UTN) (see Early October-December 2001), the CIA learns more about the organization. The CIA was previously aware that the two prominent nuclear scientists who co-founded UTN, Sultan Bashiruddin Mahmood and Chaudiri Abdul Majeed, had met with Osama bin Laden and Ayman al-Zawahiri, and advised them on how to make a nuclear weapon (see Mid-August 2001). However, the CIA discovers that other nuclear scientists are also connected to UTN, including Mirza Yusef Beg, a former member of the Pakistan Atomic Energy Commission (PAEC), and Humayun Niaz, also formerly with the PAEC. At least two senior Pakistani military officers are also connected to UTN. All these men are brought in and questioned by US officials. But the CIA is unable to question two others connected to UTN, Muhammad Ali Mukhtar, a nuclear physicist who worked for the PAEC as a weapons expert, and Suleiman Asad, who worked at A. Q. Khan’s Kahuta Research Laboratories (KRL) in its weapons design division. The CIA reasons that these two scientists would be the type of nuclear bomb makers bin Laden was most interested in. However, the Pakistani government claims that the two are in Burma working on a top secret project and cannot be brought back to Pakistan for questioning. (Levy and Scott-Clark 2007, pp. 320-321) Shortly after 9/11, Pakistani President Pervez Musharraf called one of the leaders of Burma and asked if the two scientists could be given asylum there. (Sanger 12/9/2001) The CIA is also interested in talking to Hamid Gul, a former ISI director and UTN’s honorary patron, but Pakistan will not allow him to be questioned either, even though he had met with Mahmood in Afghanistan around the time Mahmood met with bin Laden and al-Zawahiri. As a result, the CIA is unable to learn just how much UTN could have assisted al-Qaeda with weapons of mass destruction. (Levy and Scott-Clark 2007, pp. 320-321)