This page can be viewed at http://www.historycommons.org/entity.jsp?entity=mohamed_el_amir

Mohamed el Amir was a participant or observer in the following events:

Randy Glass is a con artist turned government informant participating in a sting called Operation Diamondback. (Pacenti 9/29/2001) He discusses an illegal weapons deal with an Egyptian-American named Mohamed el Amir. In wiretapped conversations, Mohamed discusses the need to get false papers to disguise a shipment of illegal weapons. His brother, Dr. Magdy el Amir, has been a wealthy neurologist in Jersey City for the past twenty years. Two other weapons dealers later convicted in a sting operation involving Glass also lived in Jersey City, and both el Amirs admit knowing one of them, Diaa Mohsen. Mohsen has been paid at least once by Dr. el Amir. In 1998, Congressman Ben Gilman was given a foreign intelligence report suggesting that Dr. el Amir owns an HMO that is secretly funded by Osama bin Laden, and that money is being skimmed from the HMO to fund al-Qaeda activities. The state of New Jersey later buys the HMO and determines that $15 million were unaccounted for and much of that has been diverted into hard-to-trace offshore bank accounts. However, investigators working with Glass are never given the report about Dr. el Amir. Neither el Amir has been charged with any crime. Mohamed now lives in Egypt and Magdy continues to practice medicine in New Jersey. Glass’s sting, which began in late 1998, will uncover many interesting leads before ending in June 2001. (MSNBC 8/2/2002) Remarkably, Dr. Magdy el Amir’s lawyer is none other than Michael Chertoff, a prominent criminal defense lawyer in New Jersey, who will later join the Bush administration’s Justice Department as assistant attorney general in charge of the Criminal Division and then become homeland defense secretary. (New York Times 12/18/1998; Mumma 6/19/2000) After 9/11, Chertoff will play a leading role in investigating and prosecuting terrorist crimes, including terrorism financing through money laundering. (Toobin 11/5/2001) It seems that the only subsequent media reference to Chertoff’s involvement in the el Amir case will appear in an opinion column by Sidney Blumenthal, a strong critic of the Bush administration. (Blumenthal 12/22/2005) 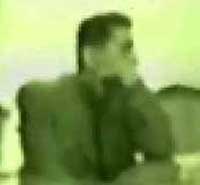 This unnamed Pakistani intelligence agent was captured on undercover video in January 2001 as part of Operation Diamondback. [Source: Dateline NBC]MSNBC airs recordings informant Randy Glass made of arms dealers and Pakistani ISI agents attempting to buy nuclear material and other illegal weapons for bin Laden. (MSNBC 8/2/2002) Meanwhile, it is reported that federal investigators are re-examining the arms smuggling case involving Glass “to determine whether agents of the Pakistani government tried to buy missiles and nuclear weapons components in the United States last year for use by terrorists or Pakistan’s military.” (Mintz 8/2/2002) Two such ISI agents, Rajaa Gulum Abbas and Abdul Malik, are already secretly indicted by this time. But Glass still says, “The government knows about those involved in my case who were never charged, never deported, who actively took part in bringing terrorists into our country to meet with me and undercover agents.” (Pacenti 8/2/2002) One such person may be a former Egyptian judge named Shireen Shawky, who was interested in buying weapons for the Taliban and attended a meeting in July 1999 in which ISI agent Rajaa Gulum Abbas said the WTC would be destroyed. (MSNBC 8/2/2002; WPBF 25 (West Palm Beach) 8/5/2002) Others not charged may include Mohamed el Amir and Dr. Magdy el Amir.