This page can be viewed at http://www.historycommons.org/entity.jsp?entity=mohammad_yousaf

Mohammad Yousaf was a participant or observer in the following events:

From 1980 to 1989, about $600 million is passed through Osama bin Laden’s charity fronts, according to Michael Scheuer, head of the CIA’s first bin Laden unit. Most of it goes through the charity front Maktab al-Khidamat (MAK), also known as Al-Kifah. The money generally comes from donors in Saudi Arabia and the Persian Gulf, and is used to arm and supply the mujaheddin fighting in Afghanistan. Mohammad Yousaf, a high ranking ISI official, will later say, “It was largely Arab money that saved the system,” since so much of the aid given by the CIA and Saudi Arabia was siphoned away before it got to Afghanistan. “By this I mean cash from rich individuals or private organizations in the Arab world, not Saudi government funds. Without those extra millions the flow of arms actually getting to the mujaheddin would have been cut to a trickle.” (Dreyfuss 2005, pp. 279-280) Future CIA Director Robert Gates will later claim that in 1985 and 1986, the CIA became aware of Arabs assisting and fighting with the Afghan mujaheddin, and the CIA “examined ways to increase their participation, perhaps in the form of some sort of ‘international brigade,’ but nothing came of it.” (Coll 2004, pp. 146) However, a CIA official involved in the Afghan war will claim that the CIA directly funded MAK (see 1984 and After).

According to Mohammad Yousaf, director of the Pakistani ISI’s Afghan Bureau during this period, the CIA has many paid assets among the Afghan mujaheddin during this period. One function of these CIA assets is to lobby the ISI for the CIA’s policies, especially with regard to weapons procurement. (Yousaf and Adkin 1992, pp. 91-92)

1984-March 1985: US and Pakistan Begin Training Afghans to Attack Inside Soviet Union

Following a March 1985 directive signed by President Reagan that sharply escalates US covert action in Afghanistan, the Pakistani ISI begins training Afghans to launch strikes directly into Soviet territory. Apparently the idea originated with CIA Director William Casey who first proposed harassing Soviet territory in 1984 (see October 1984). According to Graham Fuller, a senior US intelligence official, most top US officials consider such military raids “an incredible escalation” and fear a large-scale Soviet response if they are carried out. The Reagan administration decides not to give Pakistan detailed satellite photographs of military targets inside the Soviet Union. (Coll 7/19/1992) Mohammad Yousaf, a high-ranking ISI officer, will later claim that the training actually began in 1984. “During this period we were specifically to train and dispatch hundreds of mujaheddin up to 25 kilometers deep inside the Soviet Union. They were probably the most secret and sensitive operations of the war.” He notes that, “By 1985, it became obvious that the United States had got cold feet. Somebody at the top in the American administration was getting frightened.” But, he claims, “the CIA, and others, gave us every encouragement unofficially to take the war into the Soviet Union.” (Dreyfuss 2005, pp. 286-287) Casey will approve of such attacks and the first attack inside the Soviet Union will take place in 1985 (see 1985-1987). 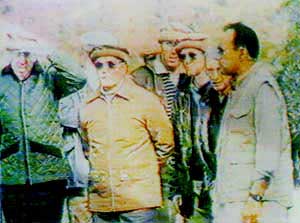 William Casey (left, with glasses) and General Akhtar Abdur Rahman (center) touring Afghan training camps in the 1980s. [Source: Associated Press]CIA Director William Casey makes a secret visit to Pakistan to plan a strategy to defeat Soviet forces in Afghanistan. Casey is flown to secret training camps near the Afghan border where he watches trainees fire weapons and make bombs. According to the Washington Post: “During the visit, Casey startled his Pakistani hosts by proposing that they take the Afghan war into enemy territory—into the Soviet Union itself. Casey wanted to ship subversive propaganda through Afghanistan to the Soviet Union’s predominantly Muslim southern republics.” The Pakistanis agree to the plan and soon the CIA begins sending subversive literature and thousands of Korans to Soviet republics such as Uzbekistan. Mohammad Yousaf, a Pakistani general who attends the meeting, will later say that Casey said, “We can do a lot of damage to the Soviet Union.” (Coll 7/19/1992) This will eventually evolve into CIA and ISI sponsored Afghan attacks inside the Soviet Union (see 1984-March 1985 and 1985-1987). 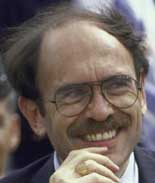 Arnold Raphel. [Source: Robert Nickelsberg / Time Life Pictures / Getty Images]Pakistan’s president Muhammad Zia ul-Haq is killed in an airplane crash. The plane went into a steep dive, then recovered regaining altitude. Then it dove a second time and crashed. (Yousaf and Adkin 1992, pp. 91-92) ISI Director Akhtar Abdur Rahman, US ambassador to Pakistan Arnold Raphel, and other Pakistani and US officials are also killed. A joint US-Pakistani investigation fails to definitively explain what caused the crash. (Coll 2004, pp. 178-179) According to Mohammad Yousaf, the ISI’s Afghan Bureau chief, the crash was due to sabotage. Yousaf does not know who was responsible, but later says that the US State Department was instrumental in the cover-up. Yousaf points out several reasons why the State Department might want to cover up the crime even if the US were not involved in the assassination itself. (Yousaf and Adkin 1992, pp. 91-92) Richard Clarke, a State Department analyst who later will become counterterrorism “tsar” for Presidents Clinton and Bush Jr., believes that Zia’s death and the destruction of a major weapons stockpile used by the CIA and ISI around the same time (see April 10, 1988) were both ordered by the Soviets as revenge for being defeated in Afgnanistan. Clarke says, “I could never find the evidence to prove that the Soviet KGB had ordered these two acts as payback for their bitter defeat, but in my bones I knew they had.” (Clarke 2004, pp. 50)