This page can be viewed at http://www.historycommons.org/entity.jsp?entity=mohammed_ahmed_al-salmi

Mohammed Ahmed al-Salmi was a participant or observer in the following events: 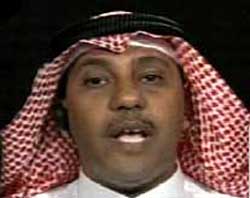 Omar al-Bayoumi. [Source: Saudi Government via Al Arabiya]The FBI conducts a counterterrorism inquiry on Omar al-Bayoumi, suspected al-Qaeda advance man, and possible Saudi agent. The FBI discovers he has been in contact with several people also under investigation. (US Congress 7/24/2003

) The FBI is given a tip that he was sent a suspicious package filled with wire from the Middle East, and that large numbers of Arab men routinely meet in his apartment. His landlord notices that he switches from driving a beat up old car to a new Mercedes. (Isikoff and Klaidman 7/28/2003) According to the 9/11 Congressional Inquiry, the FBI notes that al-Bayoumi has “access to seemingly unlimited funding from Saudi Arabia.” For instance, an FBI source identifies him as a person who has delivered about $500,000 from Saudi Arabia to buy a mosque in June 1998 (see June 1998). However, the FBI closes the inquiry “for reasons that remain unclear .” (US Congress 7/24/2003

) Also in 1999, al-Bayoumi is working as an employee of the Saudi company Dallah Avco but apparently is doing no work. Someone in the company tries to fire him and sends a note to the Saudi government about this, since the company is so closely tied to the government. However, Mohammed Ahmed al-Salmi, the Director General of Civil Aviation, replies that it is “extremely urgent” his job is renewed “as quickly as possible,” and so he keeps his job. (Simpson 8/11/2003)

Yazeed al-Salmi lives with future 9/11 hijacker Nawaf Alhazmi for about a month in the San Diego house of an FBI informant. Alhazmi has lived in the house with Khalid Almihdhar and FBI informant Abdussattar Shaikh since May 2000 (see Mid-May-December 2000), but Almihdhar left to go overseas in June and did not return to San Diego (see June 10, 2000). Apparently there are no other new roommates for the rest of the time Alhazmi lives at the house until December 2000 except for al-Salmi. Al-Salmi moves in with Alhazmi and Shaikh just three days after arriving in the US on a student visa. Hijacker associate and suspected Saudi spy Omar al-Bayoumi, who nominally reports to al-Salmi’s uncle, Mohammed Ahmed al-Salmi of the Saudi Civil Aviation ministry, helped al-Salmi find the accommodation (see September 1998-July 1999). Curiously, al-Salmi was a childhood friend of 9/11 hijacker Hani Hanjour in Saudi Arabia. (KGTV 10 (San Diego) 10/11/2001; 9/11 Commission 7/24/2004, pp. 222, 518; 9/11 Commission 8/21/2004, pp. 139