This page can be viewed at http://www.historycommons.org/entity.jsp?entity=mohammed_al_qahtani_1

Nestor Kirchner was a participant or observer in the following events:

July 18, 1994: Anti-Jewish Bombing in Buenos Aires Is Blamed on Hezbollah and Iran Despite Lack of Proof 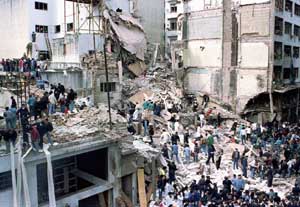 Wreckage of the AMIA Jewish community center in Buenos Aires, Argentina, [Source: Reuters / Corbis]A Jewish community center called AMIA in Buenos Aires, Argentina, is destroyed in a blast. The seven-story building is reduced to rubble and eighty-five people are killed. (BBC 8/25/2003) Argentinean authorities, as well as the United States and Israel, are quick to blame Hezbollah and its backer, Iran. They accuse an Iranian diplomat of having provided a van packed with explosives to a Hezbollah suicide bomber.
Problems with Investigation - But the investigation becomes the subject of intense controversy. Argentine President Nestor Kirchner will later call it “a national disgrace.” In 2003, it will be revealed that the investigative judge offered an apparent bribe to the man accused of selling the van used in the attack in exchange for his testimony against local police officers charged with complicity in the bombing. That judge will later be impeached and removed from office and the case will collapse. (Gotkine 12/3/2003; BBC 8/3/2005)
Forensic Evidence - Critics will also argue that the forensic evidence suggests that the bomb exploded inside the building, rather than in the street. This will be the conclusion reached by Charles Hunter, an explosives expert with the US Bureau of Alcohol, Tobacco and Firearms (ATF) who was part of the investigation. Hunter will quickly identify “major discrepancies” between the car-bomb thesis and the blast pattern recorded in photos. A report drafted two weeks later will note that, in the wake of the bombing, merchandise in a store immediately to the right of AMIA was tightly packed against its front windows and merchandise in another shop had been blown out onto the street—suggesting that the blast came from inside rather than outside. Hunter will also say he does not understand how the building across the street could still be standing if the bomb had exploded in front of AMIA. Investigators will find no conclusive evidence against any Iranian diplomat. The US ambassador to Argentina at the time, James Cheek, will comment in a 2008 article: “To my knowledge, there was never any real evidence of [Iranian responsibility]. They never came up with anything.” (Porter 1/18/2008) Nevertheless, in November 2007, Argentina, with strong support from the US and Israel, will successfully persuade Interpol to issue arrest warrants against several Iranian officials and one Lebanese Hezbollah militant. (Solomon and Perez 1/15/2008)