This page can be viewed at http://www.historycommons.org/entity.jsp?entity=mukhtar_al-bakri

Mukhtar al-Bakri was a participant or observer in the following events: 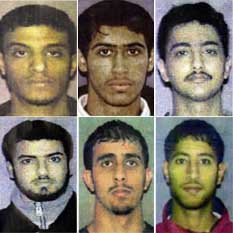 The Lackawanna Six. Top row, from left: Faysal Galab, Mukhtar al-Bakri, and Sahim Alwan. Bottom row, from left: Yahya Goba, Shafel Mosed, and Yaseinn Taher. [Source: Associated Press]A group of seven men in Lackawanna, near Buffalo, New York, are influenced by religious discussions with two al-Qaeda operatives, Kamal Derwish and Juma al-Dosari. The seven US citizens—Yaseinn Taher, Yahya Goba, Shafel Mosed, Mukhtar al-Bakri, Sahim Alwan, Faysal Galab, and Jaber Elbaneh—leave for jihad training in Afghanistan. They tell friends they are merely going to Pakistan for religious instruction. Escorted by Derwish, the men travel separately and attend a six-week long weapons course at the Al Farooq camp. Some of them meet Osama bin Laden in Kandahar and they all hear him give a speech (see (June 2001)). However, most of them apparently think they are in over their heads and find excuses to cut their basic training course short and return home. The six who return show little to no evidence of any al-Qaeda plotting in the following months. Jaber Elbaneh, however, becomes committed and stays overseas with al-Qaeda. The six who return will later be arrested and dubbed an al-Qaeda cell known as the “Lackawanna Six” (see September 13, 2002). (PBS Frontline 10/16/2003)

A group of seven Yemeni-Americans from Lackawanna, New York, go to train in Afghanistan (see April-August 2001). Just two days after some of them have arrived, two of the seven—Sahim Alwan and Jaber Elbaneh, plus their mentor Kamal Derwish, briefly meet Osama bin Laden in a small group setting. One of the men asks bin Laden about a rumor that something big is about to happen. Bin Laden responds: “They’re threatening us. And we’re threatening them. But there are brothers willing to carry their souls in their hands.” (Temple-Raston 2007, pp. 107-108) A couple of weeks later, the seven Lackawanna men and Derwish begin training at the Al Farooq training camp near Kandahar. One day, bin Laden and Ayman al-Zawahiri come to their camp and bin Laden gives a speech in Arabic to the hundreds of trainees there. The crowd is told the speech is being videotaped. In his 20-minute speech, he discusses the merger between al-Qaeda and Islamic Jihad. At the end, he calls on the gathering to pray for the 40 operatives who are en route for a very important mission. He drops hints about suicide operations against the US and Israel. One of the seven men, Yaseinn Taher, speaks Arabic well enough to understand the speech, and explains the gist of it to the other six. The Lackawanna men also sense a mood in the camp that something big is going to happen soon. For instance, the camp is regularly conducting evacuation drills in anticipation of the US bombing it. (Temple-Raston 2007, pp. 117-120) One by one, all the members of the group except for Jaber Elbaneh drop out and go home before their basic training course is done. They will later be known as the “Lackawanna Six.” But none of the six tell any US authorities what they learned when they get back to the US before 9/11. Some of the six, such as Taher and Alwan, will later say that on the morning of 9/11 they realize the attack they are watching on television is what bin Laden was talking about when he discussed the 40 men on a suicide mission. (Temple-Raston 2007, pp. 136-138)

Sahim Alwan. [Source: PBS]The FBI’s Buffalo, New York, field office receives an anonymous, handwritten letter from someone in the Yemeni community of Lackawanna, near Buffalo. The letter says that a group has traveled to “meet bin Laden and stay in his camp for training.” The person who wrote it adds, “I can not give you my name because I fear for my life.” It says that “two terrorists” have been recruiting in Lackawanna, and that eight men have gone to train in Afghanistan, and four more are planning to go later. It gives the names of the men. In fact, all eight of the men named are currently in an al-Qaeda training camp in Afghanistan. This group will later be dubbed the “Lackawanna Six,” for the six of them that eventually return to the US (see September 13, 2002). The letter is assigned to FBI agent Edward Needham, the only Buffalo agent at this time working on counterterrorism. He runs the names through criminal databases and finds that many of them have criminal records for drug dealing and cigarette smuggling. He is skeptical that drug dealers would fight for al-Qaeda, but he sends the letter up the chain of command and formally opens an investigation on June 15. Three of them—Faysal Galab, Shafel Mosed, and Yaseinn Taher—are stopped on June 27 when they arrive in New York on a flight back from Pakistan, because Needham put their names on an FBI watch list. But they are merely questioned for two hours and released. He keeps occasional tabs on the men as they return from Afghanistan over the next months, but does not learn they actually were in an al-Qaeda training camp until after 9/11. (PBS Frontline 10/16/2003; Temple-Raston 2007, pp. 124-125, 129)

In early September 2002, a group of senior Bush administration officials gathers for a secret videoconference to decide what to do with the “Lackawanna Six,” the six Yemeni-Americans living in Lackawanna, New York, who had attended an al-Qaeda training camp before 9/11. Vice President Dick Cheney and Defense Secretary Donald Rumsfeld argue that the men should be locked up indefinitely as “enemy combatants,” and thrown into a military brig with no right to trial or even to see a lawyer. The US has already done this with two other US citizens, Yaser Hamdi and Jose Padilla. According to a participant in the meeting, Cheney argues, “They are the enemy, and they’re right here in the country.” However, all six men left their basic training course early and there is no evidence any of them had carried out or even planned any terrorist acts (see April-August 2001). Attorney General John Ashcroft insists he can bring a tough criminal case against them for providing “material support” to al-Qaeda. Ashcroft wins the argument and the six men are formally charged several days later (see September 13, 2002). (Isikoff and Klaidman 10/10/2007) The six men will all eventually strike plea bargains and plead guilty, saying they were essentially forced to because the government made clear that if they fought the charges they would be declared enemy combatants (see May 19, 2003).

The FBI arrests six US citizens with a Yemeni background, on information provided by the CIA: Sahim Alwan, Mukhtar al-Bakri, Faysal Galab, Yahya Goba, Shafel Mosed and Yaseinn Taher. Five are arrested in their hometown Lackawanna, a suburb of Buffalo, New York. The sixth, who is connected to the other five, is arrested in Bahrain and then transferred to the US. (CBS News 11/9/2002) They are hereafter nicknamed “the Lackawanna Six.” They reportedly traveled to Afghanistan in April and May 2001 to join in Islamic jihad and receive military training at the Al Farooq training camp run by al-Qaeda (see April-August 2001). They also allegedly met with Osama bin Laden (see (June 2001)). They are believed to have been encouraged to go to Afghanistan by two American veteran mujaheddin, Juma al-Dosari and Kamal Derwish, who fought in the war in Bosnia and who visited Lackawanna in early 2001. (Powell 7/29/2003) One month later, a federal jury indicts the Lackawanna Six on two counts of providing material support to terrorism. They are charged with supporting terrorism. If found guilty, they could face up to 15 years in prison. All of them plead not guilty. (CBS News 10/22/2002)

Charged with supporting al-Qaeda in September 2002, all of the “Lackawanna Six” originally pled not guilty (see September 13, 2002). But by May 19, 2003, all of them change their minds and plead guilty. They accept prison terms of 6 and a half to 9 years. The Washington Post reports that the fear of being declared “enemy combatants” led “the Lackawanna Six” to engage in plea bargain talks. The six men all plead guilty of providing support to a terrorist organization and received prison sentences of six-and-a-half to nine years. “We had to worry about the defendants being whisked out of the courtroom and declared enemy combatants if the case started going well for us,” says Patrick J. Brown, attorney for one of the six. “So we just ran up the white flag and folded.” (Powell 7/29/2003) “Basically, what was related to us,” says James Harrington, attorney for another, “was that if the case was not resolved by a plea, the government was going to consider any options that it had. They didn’t say they were going to do it [declare them ‘enemy combatants’], they just were going to consider it.” (Meek 12/3/2003) This is corroborated by the US federal attorney responsible for the prosecution of the six, Michael Battle. He says his office never explicitly threatened invoking the enemy combatant status, because he did not have to. Everybody knew this threat was in the air. “I don’t mean to sound cavalier,” he says, “but the war on terror has tilted the whole [legal] landscape. We are trying to use the full arsenal of our powers. I’m not saying the ends justify the means,” he adds. “But you have to remember that we’re protecting the rights of those who are being targeted by terror as well as the rights of the accused.” (Powell 7/29/2003) Neal R. Sonnett, speaking as the chairman of the American Bar Association’s Task Force on Treatment of Enemy Combatants, says: “The defendants believed that if they didn’t plead guilty, they’d end up in a black hole forever. There’s little difference between beating someone over the head and making a threat like that.” (Powell 7/29/2003) “Nothing illustrates the US government’s new power over suspects… better than the case of the Lackawanna Six,” Guardian journalist James Meek observes. (Meek 12/3/2003)