This page can be viewed at http://www.historycommons.org/entity.jsp?entity=musbah_eter_1

Musbah Eter was a participant or observer in the following events:

April 5, 1986 and After: Berlin Discotheque Bombed by Islamic Militants; 3 Die in Blast 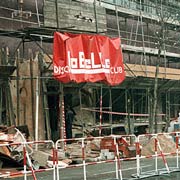 The La Belle discotheque after the bombing. [Source: Associated Press]The La Belle disco in West Berlin suffers a terrorist bombing when a two-kilogram bomb packed with plastic explosive and shrapnel detonates near the dance floor. A Turkish woman and two US soldiers are killed. Two hundred and thirty others are injured, including more than 50 US soldiers. The attack is widely blamed on the Libyan government; 10 days later, the US orders air strikes on Libyan targets. The strikes are widely perceived as an attempt to kill Libyan dictator Mu’ammar al-Qadhafi, who is not injured in the strikes, but whose adopted baby daughter is killed along with 15 civilians. Three employees at the Libyan embassy in Berlin are later found guilty of attempted murder, and the wife of one of them is found guilty of murder after she is proven to have planted the bomb. (Malinarich 11/13/2001) In 1998, ZDF, the German television network, will air a documentary that claims that Libya was not behind the bombing. The program will claim that the main suspects worked for US and Israeli intelligence. (World Socialist Web Site 8/27/1998) However, files maintained by East Germany’s intelligence agency, STASI, seem to prove that former embassy employee Musbah Eter and his three colleagues are responsible for the attack. The prosecution will not prove that al-Qadhafi or the Libyan government is responsible for the bombing. (Malinarich 11/13/2001) In 2004, Libya will agree to pay $35 million in reparations to the families of some of the victims, an implicit admission of its involvement in the attack. (Associated Press 8/10/2004)