This page can be viewed at http://www.historycommons.org/entity.jsp?entity=muslim_tartar_1

Muslim Tartar was a participant or observer in the following events: 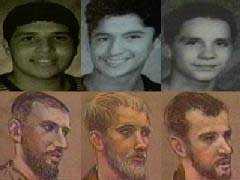 Fort Dix plot suspects. [Source: NBC]Six Muslim men are arrested in Cherry Hill, New Jersey, and accused of plotting to attack the Army’s Fort Dix in New Jersey and massacre scores of US soldiers. FBI agent J. P. Weiss says “Today we dodged a bullet. In fact, when you look at the type of weapons that this group was trying to purchase, we may have dodged a lot of bullets.” The FBI says the men had formed a “platoon” and had performed documented reconnaissance of their target. Although no evidence is uncovered linking the men to international terrorist organizations, including al-Qaeda, several of the men were willing to kill and die “in the name of Allah” according to court records. (Parry 5/8/2007) Officials characterize the plot as “homegrown” and still in the planning stages. They state that no attack was imminent. (CBS News 5/8/2007) The plotters are characterized as self-directed terrorist sympathizers. US Attorney Christopher J. Christie says, “Unlike other cases we’ve done, there was no clear ringleader. They all seemed to feed off each other. They were clearly guys turning to this element for inspiration. They wanted to be jihadists.” (Russakoff and Eggen 5/9/2007) The men are identified as ethnic Albanian Yugoslavian illegal immigrants Dritan Duka, his brothers Eljvir Duka and Shain Duka, legal Turkish immigrant Serdar Tartar, and US citizens Mohamad Ibrahim Shnewer and Agron Abdullah. (Hurriyet 5/8/2007) The FBI was first made aware of the alleged plot in January 2006. An unidentified Circuit City store clerk alerted police to a video that showed the men firing assault weapons, calling for jihad and yelling “God is great” in Arabic, according to officials. The video had been taken into the store in order to be transferred to DVD. The video came from firearms training in the Poconos, according to the indictment. (Russakoff and Eggen 5/9/2007) The FBI managed to implant an informant in the group of friends. This informant discovered 50 loaded 9mm magazines in Tartar’s car. (Hurriyet 5/8/2007) Another informant infiltrated the group and was told of the plans to attack military installations. Shnewer was recorded as saying, “My intent is to hit a heavy concentration of soldiers… This is exactly what we are looking for. You hit four, five or six Humvees and light the whole place [up] and retreat completely without any losses.” (US Department of Justice 5/8/2007

) The men allegedly possessed jihadist videos and documents, including copies of the last will and testament of two of the 9/11 hijackers. (US Department of Justice 5/8/2007

) The target was allegedly decided by information gathered by one of the men, Tartar, who had access to Fort Dix from a job delivering pizzas there. (Hurriyet 5/8/2007) The men are arrested when they attempt to buy AK-47s, M-16s, and other weapons from yet another FBI informant. (Parry 5/8/2007) Most face possible life sentences. (Russakoff and Eggen 5/9/2007)