This page can be viewed at http://www.historycommons.org/entity.jsp?entity=nadhim_jissour_1

Nadhim Jissour was a participant or observer in the following events: 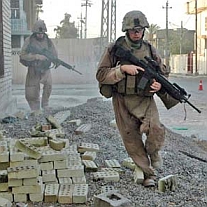 US Marines patrolling a Fallujah neighborhood. [Source: Stars and Stripes]The Christian Science Monitor examines the reasons why the Iraqi town of Fallujah is such an intransigent area of resistance to the US occupation (see April 28, 2003 and March 31, 2004). Some Americans, such as Brigadier General Mark Kimmitt, blame the recalcitrance on the largely Sunni population of Fallujah and its environs, saying that they long for the return of Saddam Hussein to power. “This was a city that profited immeasurably… under the former regime,” Kimmitt says. “They have a view that somehow the harder they fight, the better chance they have of achieving some sort of restorationist movement.”
Simplistic Explanations Inaccurate - However, Iraqi experts on the region say the truth is far more complex. The area is inhabited by a deeply clannish network of tribes and groups, as is much of the so-called “Sunni Triangle.” To many of these inhabitants, personal honor and vengeance is more important than any possible return of the Hussein regime. The problem began in the days after the initial occupation of the area by the Army’s 82nd Airborne Division, where, according to some experts knowledgeable about the situation, the residents felt dishonored and disrespected by their occupiers. “You can never forget that in this area retaliation is almost the fundamental element of the tribal system, its focal point,” says Sadoun al-Dulame, a Baghdad-based political scientist who grew up in the area as a member of the Dulame tribe. “This is a revenge culture where insults to people’s honor will always be repaid with violence.” The recent upsurge in violence in the area may also have something to do with the 82nd turning control of the region over to the Marines; area insurgents may be testing the new troops. Experts such as al-Dulame say that if Fallujah residents feel that their interests will be protected by a new government (likely to be dominated by the Sunnis’ ancient rivals, the Shi’a), then violence will lessen. But even the most optimistic estimates say that peace in the region is a year or more away.
Confluence of Factors - According to an analysis by Iraq expert Amatzia Baram, Fallujah has a large population of members of Hussein’s Albu Nasser tribe, and large numbers of ex-Iraqi Army and Iraqi intelligence personnel. Most of the Sunnis in the area are devoutly, rigidly religious, strongly influenced by the Salafy traditions of neighboring Jordan, Syria, and Saudi Arabia. Other hotbeds of violence such as Tikrit are influenced by Turkey and are less fundamentalist in their religious outlooks. “It’s gone beyond ‘you killed my cousin so I have to kill you,’” says Baram. “It’s about religion.” Worse for the Americans, there is a fundamental difference in the way the two cultures approach war. “If I kill someone from your tribe, I know another member of my tribe will definitely be killed,” Baram says. “But people in Fallujah have learned that when they kill Americans nothing much happens. They learned that the Americans have different values, and this makes killing an American less dangerous than killing someone from another tribe.” Experts such as Nadhim Jissour, another political scientist, say that even after US forces leave the region, Fallujah could still be an axis of resistance to a new Iraqi government. As for current US plans to escalate its presence in the region, these are likely to be less than effective. “If you hit the whole city, you will simply be expanding the circle of your opponents,” says al-Dulame. “There’s not much the Americans should do now but withdraw.” (Murphy 4/2/2004)