This page can be viewed at http://www.historycommons.org/entity.jsp?entity=nasser_belfas

Mohammed bin Nasser Belfas was a participant or observer in the following events: 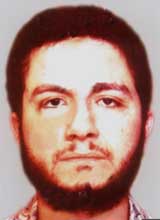 Mohamed Atta with a beard. [Source: FBI]This year, future 9/11 hijacker Mohamed Atta is regularly attending Islamic study group meetings led by a fellow Hamburg student named Mohammed bin Nasser Belfas. By this time, Atta and most of the rest of the group have replaced their Western jeans and clean-shaven faces with long beards and tunics. After one of these meetings, Atta asks to privately see Volker Harum Bruhn, an ethnic German who is also a member of the group. Bruhn says that Atta strongly warns him to stay away from Islamic extremists, to follow the Koran strictly, and live a careful life. (McDermott 9/1/2002; Rubin and Dorgan 9/9/2002)

Mohammed Belfas, mentor of lead hijacker Mohamed Atta and a former roommate of his associate Ramzi bin al-Shibh, and Belfas’ companion Agus Budiman travel to the US. Belfas, who led an Islamic study group that Atta attended in Hamburg (see 1999) and also worked in a computer warehouse with Atta, bin al-Shibh, and Marwan Alshehhi, obtains an ID card in the same fraudulent way as the 9/11 hijackers later will. After 9/11, investigators will suspect the trip was related to the attacks, as Belfas and Budiman meet a bin Laden associate in the US (see October-November 2000). Belfas and Budiman stay with Budiman’s brother, who lives in the suburbs of Washington, DC, and Budiman takes a job as a night driver for a restaurant delivery service. Belfas often accompanies him to work and offers to help drive the delivery car if Budiman helps him get a US driver’s license, which he does not need to drive the delivery route, but merely claims to want as a souvenir. On November 4 they go to the Department of Motor Vehicles and Belfas gets a Virginia ID card, after Budiman affirms he lives in Arlington. Two days later Belfas uses the ID card to get a Virginia driver’s license. He returns to Germany soon after and has an alleged chance meeting on a train with bin al-Shibh, whom he tells about the trip and the driver’s license. (McDermott 2005, pp. 57-8) Several of the 9/11 hijackers will fraudulently obtain Virginia IDs in 2001 (see August 1-2, 2001). Bin al-Shibh will also explain his and Atta’s travel to Afghanistan to join al-Qaeda to another chance meeting on a train. (9/11 Commission 7/24/2004, pp. 165)

Agus Budiman. [Source: Der Spiegel]Mohammed bin Nasser Belfas and Agus Budiman, two Muslims living in Hamburg, Germany, travel to the US where they stay for two months. During this period, they meet with Abdurahman Alamoudi, a prominent Muslim activist whom the US has linked to Osama bin Laden. (Isikoff and Hosenball 10/1/2003) In 1994, the FBI learned that bin Laden sent Alamoudi money, which he then passed on to Sheikh Omar Abdul-Rahman, known as the “Blind Sheikh” (see Shortly After March 1994). (Myers 10/23/2003) Belfas will later say the purpose behind their meetings with Alamoudi was to request some favors. For instance, at Belfas’s request, Alamoudi writes a letter of recommendation for him. But after 9/11, investigators will suspect that the two were part of the Hamburg cell and that their trip to the US was related to the 9/11 attacks, for both Belfas and Budiman have connections to Mohamed Atta and other members of the cell. (Isikoff and Hosenball 10/1/2003) In 1998, Belfas shared an apartment with Hamburg cell member Ramzi bin al-Shibh, led a prayer group attended by Atta and others (see 1999), and worked in a computer warehouse packing boxes with Atta, bin al-Shibh, and Marwan Alshehhi. (McDermott 9/1/2002)