This page can be viewed at http://www.historycommons.org/entity.jsp?entity=national_military_joint_intelligence_center_1

National Military Joint Intelligence Center (NMJIC) was a participant or observer in the following events:

(Shortly After 8:48 a.m.) September 11, 2001: NEADS Officer Calls Pentagon Intelligence Center, but It Has No Information on Flight 11 Hijacking 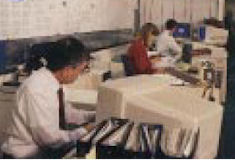 ) The NMJIC, located in the Joint Staff area of the Pentagon, constantly monitors worldwide developments for any looming crises that might require US involvement. (Blazar 9/25/1997; Joint Chiefs of Staff 2/6/2006) It “forms the heart of timely intelligence support to national-level contingency operations,” according to James Clapper, a former director of the Defense Intelligence Agency. And during a crisis, it “serves as a clearinghouse for all requests for national-level intelligence information.” (Clapper 3/1994

Dan Shanower. [Source: Family photo / Associated Press]Petty Officer Jason Lhuillier is on duty at the Chief of Naval Operations Intelligence Plot (CNO-IP). This small intelligence unit is located within the Navy Command Center at the Pentagon, on the first floor of the building’s southwest face. Since learning of the second plane hitting the WTC, he and his colleagues have been trying to build the intelligence picture, liaising with such agencies as the CIA and the Defense Intelligence Agency. Shortly before the Pentagon is struck, Lhuillier receives a phone call from the National Military Joint Intelligence Center (NMJIC). (Becker, Vogel, and Ruane 9/16/2001; Leiby 1/20/2002; Harnden 9/11/2002) Like the National Military Command Center (NMCC), the NMJIC is located in the Joint Staff area of the Pentagon. It constantly monitors worldwide developments for any looming crises that might require US involvement. (Blazar 9/25/1997; Joint Chiefs of Staff 2/6/2006) The caller informs Lhuillier, “We’ve got indications of another aircraft that’s been hijacked. It’s heading out to DC.” (Harnden 9/11/2002) The caller may possibly be referring to the same incorrect report that was received by the NMCC at around 9:30 a.m., that Flight 11 is still airborne and heading toward Washington (see 9:29 a.m.-9:34 a.m. September 11, 2001). (9/11 Commission 7/24/2004, pp. 37) Lhuillier then interrupts a meeting between Commander Dan Shanower, who is in charge of the CNO-IP, and six others, to tell them about this third plane. Commander David Radi, an aide to Admiral William Fallon, the vice chief of naval operations, is in his Pentagon office about 100 yards from the CNO-IP. He has also heard fragmentary reports about another hijacked plane heading towards Washington, and that fighter jets are being scrambled. He calls the CNO-IP for more information, but is only told, “We’re working on it.” Radi later recalls that he’d wondered where the plane might be heading: “I’m thinking to myself, ‘Well, the Pentagon, the White House or the Capitol.’” Within minutes, the Pentagon is struck. The CNO-IP will be destroyed in the impact, and seven people working in it will be killed. (Leiby 1/20/2002; Arlington County Police Department 2/21/2002; Harnden 9/11/2002)