This page can be viewed at http://www.historycommons.org/entity.jsp?entity=national_security_law_unit_

National Security Law Unit was a participant or observer in the following events:

August 20, 2001 and After: Key Justice Department Unit Not Consulted about Moussaoui Warrant Request 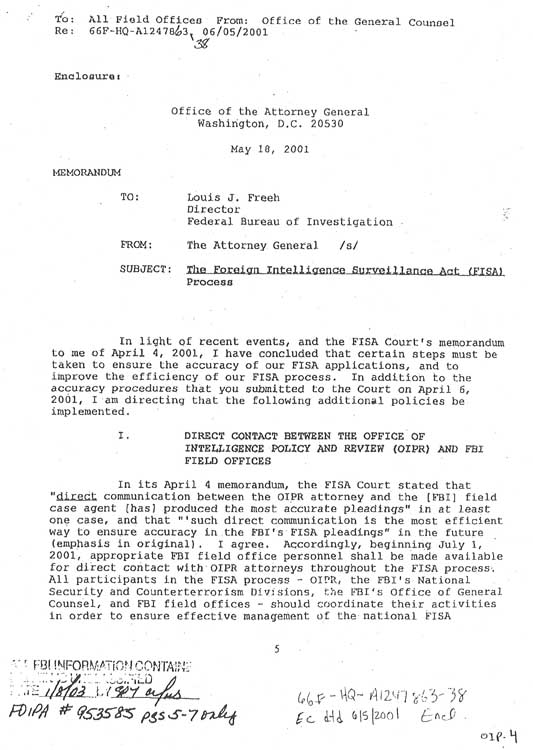 A memo from Attorney General John Ashcroft about the FISA process, obtained by the Center for Grassroots Oversight by FOIA request. [Source: Office of the Attorney General] (click image to enlarge)A key Justice Department unit, the Office of Intelligence and Policy Review (OIPR), is not consulted about a request to search Zacarias Moussaoui’s belongings. Although it is this office that would submit an application for a search warrant under the Foreign Intelligence Surveillance Act, the legal aspects of the application are discussed only with the National Security Law Unit, which is beneath the OIPR (see August 22-28, 2001). FBI officials discuss what they think the OIPR will want in a warrant application, but do not ask it directly. Sherry Sabol, an attorney in the lower National Security Law Unit, will later say that she would have contacted the OIPR to discuss a possible warrant application, if FBI headquarters agents had not withheld information from her (see August 22-28, 2001). When shown the relevant documentation for the Moussaoui case after 9/11, the OIPR’s general counsel will say he would have considered the application and, if submitted, he “would have tied bells and whistles” to a comment by Moussaoui’s imam that Moussaoui and an associate wanted to “go on jihad” (see August 17, 2001). (US Department of Justice 11/2004, pp. 132-166, 182-4, 201

) However, a memo from Attorney General John Ashcroft issued in May to improve the efficiency of the FISA process recommended communications between field offices, FBI headquarters, and the OIPR. In addition, the OIPR and the FBI should hold regular monthly meetings to discuss FISA warrants. It is unclear if such a meeting is held in the three weeks between Moussaoui’s arrest and 9/11. However, one of the people supposed to attend such meetings is Spike Bowman, chief of the National Security Law Unit, who is involved in the Moussaoui case (see August 28, 2001). (US Department of Justice 5/18/2001

The FBI’s Minneapolis field office drafts an application for a FISA warrant to search Zacarias Moussaoui’s belongings and sends it to the Radical Fundamentalist Unit (RFU) at FBI headquarters. From there, the application is sent to four attorneys at the FBI’s national security law unit (NSLU), as it needs to be legally cleared by them before being submitted to the FISA court. All four attorneys are doubtful that the application contains enough evidence to secure a warrant. Although they are aware that Moussaoui is connected to Chechen rebels, they do not believe the FISA court will consider the Chechen rebels to be a foreign power. Moreover, they do not think the connection between the Chechens and Osama bin Laden is strong enough to make Moussaoui an agent of al-Qaeda. However, the attorneys are not given the relevant documentation. For example, they are not informed that the FBI was warned in April that the Chechen rebel leader and bin Laden were planning an attack against the US (see Before April 13, 2001). Nor are they provided with a copy of the Phoenix memo, in which Arizona FBI agent Ken Williams correctly theorized that bin Laden was sending agents to the US to train in flight schools (see July 10, 2001). Attorney Sherry Sabol will later say that she asked RFU agents Mike Maltbie and Rita Flack whether there was any evidence of people being sent to the US for flight training. Flack, who read the Phoenix memo five days before (see August 22, 2001), said no. Maltbie will later say he does not recall this, and Flack will deny it. (US Department of Justice 11/2004, pp. 139-160

; US District Court for the Eastern District of Virginia, Alexandria Division 7/31/2006

) The Justice Department’s Office of Inspector General will later criticize Flack for failing to inform the attorneys of the memo. (US Department of Justice 11/2004, pp. 208

) Sabol, fellow NSLU attorney Tom Ainora, and another attorney whose name is unknown will say that they would have taken actions to support the application if they had known about the Phoenix memo. However, they do not believe that material from the Phoenix memo would have been enough to secure the FISA warrant. (US Department of Justice 11/2004, pp. 146-8, 158-160, 208

Mike Maltbie and Rita Flack of the Radical Fundamentalist Unit (RFU) forward a request for a warrant to search Zacarias Moussaoui’s belongings (see August 21, 2001) to National Security Law Unit chief Spike Bowman. The request was submitted by the Minneapolis field office (see August 22-28, 2001), which has been trying to obtain a warrant for some time. Earlier in the day, Maltbie edited the request, removing information connecting Moussaoui to al-Qaeda through a rebel group in Chechnya (see August 28, 2001). RFU chief Dave Frasca was to attend the meeting, but is called away at the last minute. According to Bowman, who is already very familiar with the facts in this case, Maltbie is adamant that there is not enough evidence to issue the warrant. Bowman agrees, saying that the evidence fails to implicate Moussaoui as an agent of a foreign power. The FBI thus abandons the effort to obtain a FISA warrant and begins planning his deportation (see (August 30-September 10, 2001)). (US Department of Justice 11/2004, pp. 164-6, 168

FBI headquarters agents Dina Corsi and Rod Middleton contact Justice Department lawyer Sherry Sabol to ask her opinion on the search for 9/11 hijacker Khalid Almihdhar, but Sabol will later say that Corsi misrepresents her advice to other agents. Corsi contacts Sabol, an attorney at the national security law unit, to ask her about legal restrictions on the search for Almihdhar, because of an argument she has had with New York agent Steve Bongardt about whether the search should be an intelligence or criminal investigation (see August 28, 2001 and August 28, 2001). Corsi will later tell Bongardt that Sabol told her that the information needed for the investigation cannot be passed on to criminal agents at the FBI, only intelligence agents, and that if Almihdhar is located, a criminal agent cannot be present at an interview. (US Department of Justice 11/2004, pp. 307-8

) Corsi’s understanding of the issue is wrong, and the “wall,” which restricted the passage of some intelligence information to criminal agents at the FBI, does not prevent the information in question being shared with criminal agents (see August 29, 2001). The 9/11 Commission will comment that Corsi “appears to have misunderstood the complex rules that could apply to the situation.” (9/11 Commission 7/24/2004, pp. 271) In addition, Sabol will later insist that her advice was very different than what Corsi claims it is. She will deny saying a criminal agent could not interview Almihdhar, arguing that she would not have given such inaccurate advice. She will also say the caveat on the intelligence information from the NSA would not have stopped criminal agents getting involved and, in any case, the NSA would have waived the caveat if asked. (Note: the NSA did so at Corsi’s request just one day earlier (see August 27-28, 2001), but presumably Corsi does not tell Sabol this.) (9/11 Commission 7/24/2004, pp. 271) Larry Parkinson, the FBI’s general counsel at this time, will later say there was no legal bar to a criminal agent being present at an interview and that he would be shocked if Sabol had actually told Corsi this. (9/11 Commission 2/24/2004) Furthermore, Corsi apparently does not tell Sabol that Almihdhar is in the US illegally. The illegal entry is a crime and means criminal FBI agents can search for him (see August 29, 2001).

Two pages from Moussaoui’s notebooks mentioning Ahad Sabet (Ramzi bin al-Shibh’s alias), plus phone number and mention of his residence in Germany. [Source: FBI]Within an hour of the 9/11 attacks, the Minnesota FBI uses a memo written to FBI headquarters shortly after Zacarias Moussaoui’s arrest to ask permission from a judge for the search warrant they have been desperately seeking. After the World Trade Center is hit for the first time at 8:46 a.m., Mike Maltbie of the Radical Fundamentalist Unit (RFU) at FBI headquarters calls the Minneapolis field office and talks to FBI agent Coleen Rowley. When Rowley says it is essential they get a warrant to search Moussaoui’s belongings, Maltbie instructs her to take no action, because it could have an impact on matters of which she is not aware. Rowley replies that it would have to be the “hugest coincidence” if Moussaoui were not related to the attack. She will recall that Maltbie replies that coincidence is the right word. Maltbie will later say he does not recall using the word “coincidence” in the conversation. Maltbie then consults Tom Ainora, an attorney at the FBI’s national security law unit, who says Minneapolis should seek the warrant. While Rowley is waiting for Maltbie to call back, one of her colleagues, Chris Briese, talks to RFU chief Dave Frasca. According to Briese, Frasca initially says there is not enough evidence for a criminal warrant, but when they find out the Pentagon has been hit Frasca consents. Frasca will say that he consents immediately. (Time 5/21/2002; US Department of Justice 11/2004, pp. 178-9

) Briese later tells Samit that Frasca also initially claims it is just “a coincidence.” (Gordon 6/4/2006) A federal judge approves a criminal search warrant this afternoon. (Hersh 9/30/2002; US District Court for the Eastern District of Virginia, Alexandria Division 3/9/2006) The Radical Fundamentalist Unit at FBI headquarters had previously blocked requests for criminal and intelligence search warrants (see August 21, 2001 and August 28, 2001). Rowley will note that this very memo was previously deemed insufficient by FBI headquarters to get a search warrant, and the fact that they are immediately granted one when finally allowed to ask shows “the missing piece of probable cause was only the [FBI headquarters’] failure to appreciate that such an event could occur.” (Time 5/21/2002) After the warrant is granted, Moussaoui’s belongings are then rushed to an evidence response team, which discovers documents linking Moussaoui to 11 of the hijackers (see August 16, 2001). Rowley later suggests that if they had received the search warrant sooner, “There is at least some chance that… may have limited the September 11th attacks and resulting loss of life.” (Ratnesar and Weisskopf 5/27/2002)