This page can be viewed at http://www.historycommons.org/entity.jsp?entity=neal_katyal

Neal Katyal was a participant or observer in the following events:

The US Supreme Court upholds by a 6-3 vote the legitimacy of Executive Order 9066 issued by President Franklin Roosevelt on February 19, 1942 that mandated all Americans of Japanese heritage to report to internment camps during World War II. Writing for the Court in the case of Korematsu v. United States, Justice Hugo Black finds that an executive order based on race is “suspect,” but says that the “emergency circumstances” of wartime make the order necessary and constitutional. Forty-four years later, in 1988, Congress will formally apologize and issue monetary reparations to Japanese-American families who had been forced into the camps. (PBS 12/2006; Savage 5/24/2011) In 2011, acting Solicitor General Neal Katyal will state that his predecessor during the case, Charles Fahy, deliberately hid evidence from the Court that concluded Japanese-Americans posed no security or military threat. The report from the Office of Naval Intelligence (ONI) found that no evidence of Japanese-American disloyalty existed, and that no Japanese-Americans had acted as spies or had signaled enemy submarines, as some at the time believed. Katyal will say that he has a “duty of absolute candor in our representations to the Court.” Katyal will say that two government lawyers informed Fahy he was engaging in “suppression of evidence,” but Fahy refused to give the report to the Court. Instead, Fahy told the Court that the forced internment of Japanese-Americans was a “military necessity.” Fahy’s arguments swayed the Court’s opinion, Katyal will state. “It seemed obvious to me we had made a mistake. The duty of candor wasn’t met,” Katyal will say. (Savage 5/24/2011)

Secretary of Defense Donald Rumsfeld signs Military Commission Order No. 1 prescribing the procedures of the military commission trials (see November 10, 2001). The order says a two-third majority is required to determine a sentence and unanimity for applying the death penalty. It fails to provide for the possibility of appeals. It also says evidence submitted before a commission “shall” be declared admissible if the presiding officer or a majority of the commission members consider that it “would have probative value to a reasonable person.” (US Department of Defense 3/21/2002

)
Fundamental Violations of Defendant Rights - Thus, if the presiding member or a majority considers a statement made under any form of coercion, including torture, to have some “probative value,” it “shall” be admitted. Professor Neal Katyal of Georgetown University later says this is a break with standard proceedings in civil courts and courts-martial and calls it “clearly at odds with American military justice.” (Hendren 8/18/2004) Under the rules, the “Accused” is assigned a military officer to conduct his defense, but may select another officer. He may also retain a civilian attorney; however, he may only choose a lawyer who is vetted by the military. Unlike a military attorney, the civilian lawyer can be excluded from the trial if the presiding member of the commission decides to hold closed proceedings. This prompts Amnesty International to observe that the commissions “will restrict the right of defendants to choose their own counsel and to an effective defense.” (Amnesty International 10/27/2004) Under the rules of the military commissions the military is allowed to monitor private conversations between defense lawyers and their clients. This violates, as Human Rights Watch remarks, “the fundamental notion of attorney-client confidentiality.” (Human Rights Watch 1/9/2004)
Extraordinary Procedures for a 'Special Breed of Person' - In a discussion of the new rules, Deputy Secretary of Defense Paul Wolfowitz, in an appearance on the PBS NewsHour with Jim Lehrer, explains that the detainees being held in Guantanamo are “dangerous people, whether or not they go before a military commission.” He adds, “We’re dealing with a special breed of person here” and thusly new and far more draconian rules must be applied. (PBS 3/21/2002)
Battle with JAG Lawyers - Rumsfeld worked with lawyers from the Pentagon’s Judge Advocate General (JAG) office to create the procedures for the commissions. The JAG lawyers viewed the commissions as well outside the established rule of law, both in due process as mandated by the Constitution and in the protections mandated by the Geneva Conventions. But Rumsfeld and his group of political appointees considered the JAGs too closed-minded, and insisted on procedures that horrified the military lawyers—low standards for convictions, denial of civilian attorneys, imposition of the death penalty without unanimous consent of the panel of officers judging the case, and other proposed procedures. The JAGs argued that some of the proposals floated by Rumsfeld and his staff would violate their own ethical standards and put them at risk for later prosecution for war crimes if adopted. One top JAG official threatened to resign if the procedures were not brought more in line with established military law. The final version is a compromise between the two camps. Major General Thomas Romig, the head of JAG, later says that the final version still is not what the JAGs would have created on their own. As reporter and author Charlie Savage will later write, based on Romig’s comments: “While less draconian than the political appointees’ initial plans, the military commissions were still legally objectionable in several respects. The commission rules, for example, allowed secret evidence that would be kept hidden from a defendant and allowed the admission of evidence obtained through coercive interrogations [torture]. Moreover, the special trials still had no explicit congressional authorization.” (Savage 2007, pp. 138-139)

Salim Ahmed Hamdan. [Source: Public domain]US District Judge James Robertson rules that the Combatant Status Review Tribunal being held at the Guantanamo base in Cuba to determine the status of detainee Salim Ahmed Hamdan is unlawful and cannot continue. At the time of the decision, Hamdan is before the Guantanamo military commission. (Leonnig and Mintz 11/9/2004; Locy 11/9/2004) The commission system, as set up by White House lawyers David Addington and Timothy Flanigan three years before (see Late October 2001), gives accused terrorists such as Hamdan virtually no rights; in author and reporter Charlie Savage’s words, “the [Bush] administration had crafted rules that would make it easy for prosecutors to win cases.” (Savage 2007, pp. 195-196)
Violation of Geneva Conventions - Robertson, in his 45-page opinion, says the government should have conducted special hearings to determine whether detainees qualified for prisoner-of-war protections under the Geneva Conventions at the time of capture. (Locy 11/9/2004) He says that the Bush administration violated the Geneva Conventions when it designated prisoners as enemy combatants, denied them POW protections, and sent them to Guantanamo. (Savage 11/9/2004) The Combatant Status Review Tribunals that are currently being held in response to a recent Supreme Court decision (see June 28, 2004) are inadequate, Robertson says, because their purpose is to determine whether detainees are enemy combatants, not POWs, as required by the Third Geneva Convention. (Locy 11/9/2004)
Rejects Claims of Presidential Power - Robertson also rejects the administration’s claim that the courts must defer to the president in a time of war. “The president is not a ‘tribunal,’” the judge says. (Locy 11/9/2004) Robertson, a Clinton appointee, thus squarely opposes both the president’s military order of November 13, 2001 (see November 13, 2001) establishing the possibility of trial by military tribunal, and his executive order of February 7, 2002 (see February 7, 2002) declaring that the Geneva Conventions do not to apply to Taliban and al-Qaeda prisoners. “The government has asserted a position starkly different from the positions and behavior of the United States in previous conflicts,” Robertson writes, “one that can only weaken the United States’ own ability to demand application of the Geneva Conventions to Americans captured during armed conflicts abroad.” (Locy 11/9/2004; Leonnig and Mintz 11/9/2004; Savage 11/9/2004)
Orders Military Courts-Martial - Robertson orders that until the government conducts a hearing for Hamdan before a competent tribunal in accordance with the Third Geneva Conventions, he can only be tried in courts-martial, according to the same long-established military rules that apply to trials for US soldiers. (Leonnig and Mintz 11/9/2004; Savage 11/9/2004) Robertson’s ruling is the first by a federal judge to assert that the commissions are illegal. (Leonnig and Mintz 11/9/2004)
Hearings Immediately Recessed - When word of Robertson’s ruling comes to Guantanamo, Colonel Peter Brownback, presiding over a pretrial hearing for Hamdan, immediately gavels the hearing closed, declaring an “indefinite recess” for the tribunal. (Savage 2007, pp. 195-196)
Ruling Applauded by Civil Libertarians, Rejected by Bush Lawyers - Anthony Romero, director of the American Civil Liberties Union; Eugene Fidell, president of the National Institute of Military Justice; and Michael Ratner, president of the Center for Constitutional Rights, all applaud Robertson’s ruling. (Savage 11/9/2004) The Bush administration rejects the court’s ruling and announces its intention to submit a request to a higher court for an emergency stay and reversal of the decision. “We vigorously disagree.… The judge has put terrorism on the same legal footing as legitimate methods of waging war,” Justice Department spokesman Mark Corallo says. “The Constitution entrusts to the president the responsibility to safeguard the nation’s security. The Department of Justice will continue to defend the president’s ability and authority under the Constitution to fulfill that duty.” (Leonnig and Mintz 11/9/2004; Savage 11/9/2004) He also says that the commission rules were “carefully crafted to protect America from terrorists while affording those charged with violations of the laws of war with fair process.” (Savage 11/9/2004)
Ruling May Affect Other Detainees - Though the ruling technically only applies to Hamdan, his civilian attorney, Neal Katyal, says it could affect other detainees. “The judge’s order is designed only to deal with Mr. Hamdan’s case,” Katyal says. “But the spirit of it… extends more broadly to potentially everything that is going on here at Guantanamo.” (Locy 11/9/2004) 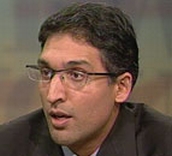 Neal Katyal. [Source: PBS]Georgetown law professor Neal Katyal is to be named the Justice Department’s deputy solicitor general. Katyal successfully argued for the defense in the landmark Hamdan v. Rumsfeld trial before the Supreme Court (see June 30, 2006). Legal Times reporter Joe Palazzolo writes, “Katyal’s appointment is another strong signal of President-elect Barack Obama’s intentions to depart sharply from the terrorist detention and interrogation policies of the Bush administration.” The Hamdan case, “which marked Katyal’s first appearance before the high court, was a stinging rebuke to [President Bush’s] broad assertion of wartime power.” Katyal’s boss, Harvard Law School dean Elena Kagan, was named earlier in the month. Katyal was incoming Attorney General Eric Holder’s national security adviser in the Justice Department from 1998 to 1999, when Holder was deputy attorney general for the Clinton administration. Katyal also served as one of the co-counsels for Vice President Gore in the Supreme Court election dispute of December 2000. He once clerked for Supreme Court Justice Stephen Breyer. (Palazzolo 1/17/2009)