This page can be viewed at http://www.historycommons.org/entity.jsp?entity=oak_ridge_national_laboratory_1

Oak Ridge National Laboratory was a participant or observer in the following events:

July 12, 2004: Bush: Invasion of Iraq Part of a Three-Pronged Strategy for Peace in Middle East 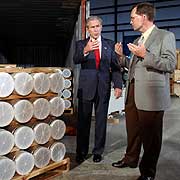 Bush, with Oak Ridge’s Jon Kreykes, looks at nuclear weapons materials turned over by Libya. [Source: Associated Press]In a speech given at the Oak Ridge National Laboratory, President Bush defends the decision to invade and occupy Iraq as necessary for the nation’s safety. “Although we have not found stockpiles of weapons of mass destruction, we were right to go into Iraq,” he tells listeners. “I had a choice to make. Either take the word of a madman, or defend America. Given that choice, I will defend America every time.… We removed a declared enemy of America, who had the capability of producing weapons of mass murder, and could have passed that capability to terrorists bent on acquiring them. In the world after September the 11th, that was a risk we could not afford to take.” Bush is battling against recent findings by the Senate Intelligence Committee that showed his administration distorted and cherry-picked intelligence reports in its progress towards the invasion (see July 9, 2004). In his speech, Bush attempts to revise the rationale for invading Iraq. While the reasoning for invading was formerly the specter of Iraqi WMD imperiling the Middle East and even the US itself, now Bush asserts that invading Iraq and overthrowing Saddam Hussein was the first action of a larger, three-pronged strategy for peace. The strategy is, he says, “defending the peace, protecting the peace, and extending the peace.” He says, “We are defending the peace by taking the fight to the enemy,” in what the Washington Post calls “a subtle reformulation of the idea of ‘preemption’ that has been a centerpiece of his foreign policy since the Sept. 11, 2001, terrorist attacks.” Bush continues: “We have followed this strategy—defending the peace, protecting the peace, and extending the peace—for nearly three years. We have been focused and patient, firm and consistent. [The administration is] protecting the peace by working with friends and allies and international institutions to isolate and confront terrorists and outlaw regimes.” Both Iraq and Afghanistan are the beneficiaries of positive change, he says, as are Pakistan, Saudi Arabia, and Libya. Most importantly, he says, “the American people are safer.” (Benedetto 7/12/2004; White House 7/12/2004; Goldstein 7/13/2004) Reading about Bush’s speech, senior CIA case officer Valerie Plame Wilson, an expert on Iraqi WMD, is bemused by Bush’s words. In 2007, she will write, “It was as if there were two wars: the one that the administration touted with pride, and the one that everyone else followed on their TVs and that wasn’t going as promised.” (Wilson 2007, pp. 184)