This page can be viewed at http://www.historycommons.org/entity.jsp?entity=occupational_safety_and_health_administration_(osha)

Occupational Safety and Health Administration (OSHA) was a participant or observer in the following events:

) Critics will argue that monitoring outdoor air is insufficient since it will ultimately be diluted because of wind and diffusion—unlike indoor air, which clings to fabrics and is trapped within walls. (Kazan-Allen 1/21/2002) Aside from a few exceptions (see September 13, 2001-September 19, 2001), the EPA will use the outdated polarized light microscopy (PLM) testing method for counting asbestos fibers instead of electron microscope technology (see September 12, 2001) which provides far more accurate results. (Schneider 2/28/2001; Schneider 1/14/2002)

September 14, 2001: Majority of Dust Samples near Ground Zero Said Not to Contain ‘Levels of Concern for Asbestos’

EPA and OSHA announce that the majority of air and dust samples monitored in New York’s financial district “do not indicate levels of concern for asbestos” and that ambient air quality “meets OSHA standards.” The two agencies also say that OSHA has new data indicating that indoor air quality in downtown buildings “will meet standards.” The agencies’ conclusions are based on samples taken on September 13. “OSHA staff walked through New York’s Financial District… wearing personal air monitors and collected data on potential asbestos exposure levels. All but two samples contained no asbestos.… Air samples taken… inside buildings in New York’s financial district were negative for asbestos. Debris samples collected outside buildings on cars and other surfaces contained small percentages of asbestos, ranging from 2.1 to 3.3—slightly above the 1 percent trigger for defining asbestos material.” (Occupational Safety and Health Administration 9/14/2001) But the EPA improperly implies that the one percent level is a safety benchmark (see (September 12, 2001)), even though it had previously acknowledged that airborne asbestos particles are unsafe at any level (see September 14, 2001). Furthermore, its test results are not accurate, as they are based on the outdated polarized light microscopy (PLM) testing method, which is incapable of identifying fine fibers and which cannot reliably detect asbestos when it is present in concentrations below one percent (see November 20, 1990).

John L. Henshaw, Assistant Secretary of Labor for OSHA, states: “Our tests show that it is safe for New Yorkers to go back to work in New York’s financial district. Keeping the streets clean and being careful not to track dust into buildings will help protect workers from remaining debris.” (Environmental Protection Agency 9/14/2001) 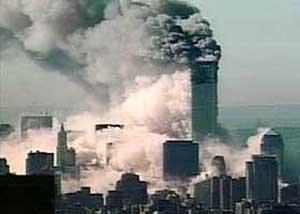 Smoke from the WTC tower collapses covers lower Manhattan on the day of 9/11, and for days afterward. [Source: ABC News/ Associated Press]The Environmental Protection Agency (EPA) and Occupational Safety and Health Administration (OSHA) release a joint statement asserting that the air in downtown New York City is safe to breathe. “New samples confirm previous reports that ambient air quality meets OSHA standards and consequently is not a cause for public concern,” the agencies claim. (Environmental Protection Agency 9/16/2001) However, the government’s statements are based on ambient air quality tests using outdated technologies. (Schneider 1/14/2002) Furthermore, it will later be learned that the press release was heavily edited under pressure from the White House’s Council on Environmental Quality (CEQ). Critical passages in the original draft were either deleted or modified to downplay public health risks posed by contaminants that were released into the air during the collapse of the World Trade Center. (Environmental Protection Agency 8/21/2003

; Ramirez 8/26/2003) In late October, the New York Daily News will obtain internal EPA documents containing information that had been withheld from the public. One document says that “dioxins, PCBs, benzene, lead, and chromium are among the toxic substances detected… sometimes at levels far exceeding federal levels.” (Gonzalez 10/26/2001) Later, in October, it will be reported that thousands of rescue workers and residents are experiencing respiratory problems that experts attribute to the toxic smoke flume and ultra fine dust. (CNN 10/29/2001; Dreher 10/29/2001; Ramirez 10/30/2001; BBC 10/31/2001)

Nicole Pollier, a legal intern at Center for Constitutional Rights, testifies before the Environment Committee of the New York City Council and discusses health concerns at the WTC recovery site. She says that the Center found that “virtually none of the people working at the WTC disaster site are or have been wearing any personal protective equipment,” which the organization attributes to a lack of organized training. Only 5-10 percent of the workers wear disposable dust masks, she said. Additionally, “workers leaving the site are not decontaminated, nor do they use the washing stations that have been set up at the perimeter of the site by volunteer organizations.” Pollier says the Center blames OSHA which has taken the position that the site’s designation as a “search and rescue” operation denies it the authority to enforce safety laws. There have been “no mandated training sessions, and no enforcement of personal protective equipment requirements or exposure monitoring requirements,” she explains. Instead, OSHA has played a consultative role as a technical adviser. Pollier says that the Center disagrees with OSHA’s position, calling attention to a 1991 directive entitled “OSHA Response to Significant Events of Potentially Catastrophic Consequences,” which states: “The OSH Act requires that OSHA respond to catastrophic events….” (New York City 11/1/2001)