This page can be viewed at http://www.historycommons.org/entity.jsp?entity=oleg_gordievsky_1

Oleg Gordievsky was a participant or observer in the following events: 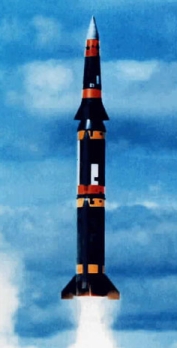 Test firing of a US Pershing II IRBM. [Source: US Army / Public domain]The US and its NATO allies carry out a military exercise called “Able Archer,” or “Able Archer 83,” designed to simulate the use of nuclear weapons in an assault against the Soviet Union, and to test command and control procedures. The military exercise comes perilously close to touching off a real nuclear exchange with the USSR. The exercise—not the first of its kind, but the most expansive—is huge, spanning Europe from Turkey to Scandinavia; it involves the heads of state of countries like Great Britain and Germany; and, perhaps most alarmingly for the Soviets, involves NATO forces escalating their military alert levels to DEFCON-1, at which point NATO nuclear weapons have their safeguards disabled and are ready for launch. The Soviet’s VRYAN program to detect a possible assault (see May 1981) is extremely active. On November 8, Moscow sends high-priority telegrams to its KGB stations in Western Europe demanding information about a possible surprise first attack on the USSR. Though little actual evidence exists, some sources erroneously tell Moscow that NATO ground forces are mobilizing. The KGB concludes that “Able Archer” is a cover for a real military assault; Warsaw Pact fighter units armed with nuclear weapons are put on alert in East Germany and Poland. (Scoblic 2008, pp. 134-135; Miloudi 11/10/2008)
'Frighteningly Close' to Nuclear War, Says Soviet Intelligence Official - Oleg Gordievsky, the intelligence chief of the Soviet embassy in London and a British double agent, warns the British that the West is entering what he calls a “danger zone.” The Daily Telegraph will later write, “It was on Nov. 8-9 that the Kremlin had pressed what came close to a panic button.” (Washington Post 10/16/1988) In his memoirs, Gordievsky will write: “In the tense atmosphere generated by the crises and rhetoric of the past few months, the KGB concluded that American forces had been placed on alert—and might even have begun the countdown to war.… [D]uring ABLE ARCHER 83 it had, without realizing it, come frighteningly close—certainly closer than at any time since the Cuban missile crisis of 1962.” (Fischer 3/19/2007)
Reagan 'Shocked' at Soviet Reaction - The exercise ends without incident, but National Security Adviser Robert McFarlane will later admit, “The situation was very grave.” Secretary of State George Shultz terms the exercise “a close call” and “quite sobering.” In early 1984, when the CIA reports that the Soviets had been convinced that the US was readying a nuclear strike, President Reagan will be, in author J. Peter Scoblic’s words, “shocked” to realize that he and his administration “had nearly started a nuclear war.” Reagan, in McFarlane’s recollection, will show “genuine anxiety” and begin talking about the concept of Armageddon—the Biblical end times—with his advisers. (Fischer 3/19/2007; Scoblic 2008, pp. 134-135)

Fox News host Glenn Beck says that Social Security and Medicare are “socialist” programs that “should have never been created.” Beck tells his viewers: “Do you think programs like Social Security and Medicare represent socialism and should have never been created in the first place?… I’m an American. I read. I believe in the Constitution. And, of course, Social Security and Medicare represent socialism and should have never been created. Since FDR and his progressive buddies started Social Security, not our Founding Fathers, that should be fairly obvious to people.” Beck tells his viewers that Social Security was created by Harry Hopkins, an adviser to then-President Franklin Roosevelt who, Beck says, “had a relationship with [Josef] Stalin,” the then-dictator of the Soviet Union. Therefore, Beck says, Social Security is a Stalinist “redistribution of wealth” program that is inherently Marxist in its nature. (Media Matters 1/27/2010; Media Matters 9/7/2010) Beck’s allegation that Hopkins was some sort of “Stalinist” is false. The allegation originally came from KGB defector Oleg Gordievsky, who wrote a sensationlist book, KGB: The Inside Story, where he alleged Hopkins was “an unconscious spy” for the Soviet Union during World War II. In reality, Hopkins was the top official in the Roosevelt administration charged with dealing with Soviet officials during World War II. His job involved explaining American policies and positions to Stalin and other top Soviet officials. Since Soviets who spoke to Hopkins routinely reported the contacts to the Soviet national security agency, the NKVD, Hopkins was listed as a “source” or “agent” of information for Moscow. No evidence has ever surfaced that Hopkins provided any classified or unauthorized information to the USSR, or in any way worked to advance the cause of Soviet Communism. (Newton 10/28/1990)