This page can be viewed at http://www.historycommons.org/entity.jsp?entity=paddy_ashdown_1

Paddy Ashdown was a participant or observer in the following events: 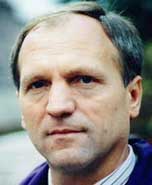 Munir Alibabic. [Source: Dani]By 2002, the Muslim Bosnian government is controlled by the Social Democrats, now that Alija Izetbegovic has retired and his SDA party is out of power. To deal with the issues of corruption and terrorism, in July 2002 the new government brings Munir Alibabic out of retirement to run Bosnia’s intelligence agency. Alibabic had been fired in 1994 as head of the secret police in Sarajevo for opposing government corruption and the support of the mujaheddin, and he is widely respected for his integrity. He vows to stop the cover-up of Bosnian Muslim ties to terrorism, stating, “A crime is a crime, regardless which side commits it.” He works aggressively with other intelligence agencies to uncover the al-Qaeda network in Bosnia. He soon completes a report detailing ties between the SDA party and organized crime. The report names Elfatih Hassanein, Hasan Cengic, Irfan Ljevakovic, Bakir Alispahic, and Alija Delimustafic as key co-consiprators. The first three were central figures in the Third World Relief Agency (TWRA), a bin Laden-linked charity front active in the early 1990s (see Mid-1991-1996). But in October 2002 elections, the SDA returns to power. Paddy Ashdown, a British politician serving as the Office of the High Representative in Bosnia, publicly supported the SDA over secularists and reformers in the election and shortly after they win he fires Alibabic. Author John Schindler will later write that “By the end of 2002, it was evident that the post-9/11 drive to run al-Qaeda out of Bosnia and force its local supporters to heel had run out of steam.” (Schindler 2007, pp. 289-291) The Telegraph will later report that Ashdown fired Alibabic on the advice of the British intelligence agency MI6, but it isn’t clear why. (de Quetteville and Griffiths 9/27/2004)

Lord Paddy Ashdown, the former United Nations high representative and European Union special representative for Bosnia and Herzegovina, says that international forces are unlikely to win the war in Afghanistan, risking to set off a regional conflict that could match the scale and magnitude of World Wars I and II. “I think we are losing in Afghanistan now, we have lost I think and success is now unlikely,” Ashdown says in an interview with Reuters. “Some people refer to the First and Second World Wars as European civil wars and I think a similar regional civil war could be initiated by this (failure) to match this magnitude,” he says. Ashdown warns that failure of international forces in Afghanistan would have wider repercussions than any loss in Iraq. “I believe losing in Afghanistan is worse than losing in Iraq. It will mean that Pakistan will fall and it will have serious implications internally for the security of our own countries and will instigate a wider Shiite, Sunni regional war on a grand scale.” Ashdown then ties impending catastrophe in Afghanistan with the lack of a powerful, high-level coordinator to lead the foreign mission there. “Unless somebody has the power genuinely to coordinate and unify the international approach, we will lose and I think that is happening,” he says. Ashdown, who currently heads the EU-Russia Centre think tank in Brussels, has been tipped and promoted for such a role by some US and UK officials, but says he has ruled himself out of the job. (Ennis 10/17/2007) Ashdown will later interview for the position of United Nations “super envoy” to Afghanistan. However, Afghan president Hamid Karzai will oppose Ashdown’s candidacy, forcing him to withdraw his name from consideration, something he will say he did “reluctantly.” (UN Elections.org 1/30/2008)