This page can be viewed at http://www.historycommons.org/entity.jsp?entity=pennsylvania_task_force_1_1

Pennsylvania Task Force 1 (PA-TF1) was a participant or observer in the following events: 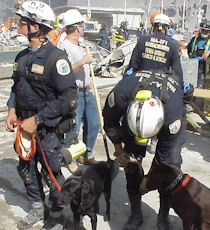 ; Sweet and Lazar 9/12/2001; Beemt 9/4/2002) After encountering long delays in the traffic in and around the city, they arrive at the Jacob K. Javits Convention Center in Manhattan at around 10:30 p.m. There, they set up a base of operations, which is the area where task forces set up their command center and equipment cache, along with sleeping, food service, and personal hygiene areas for their members. After a few hours of rest, members of the task forces will undertake preliminary rescue operations at between 5:00 a.m. and 9:00 a.m. on September 12.
Six More Task Forces Subsequently Arrive - Later on September 12, and on September 13, the two task forces will be joined by Ohio Task Force 1 and Indiana Task Force 1. On September 14, the final four of the initial eight urban search and rescue teams activated by FEMA after the terrorist attacks will arrive at the WTC site. These are Missouri Task Force 1, California Task Force 1, California Task Force 6, and California Task Force 7. After being flown to McGuire Air Force Base in New Jersey, these four teams will make their way to New York by ground transportation. (Endrikat 10/1/2002)
Search and Rescue Teams Deployed to Pentagon - FEMA’s urban search and rescue teams consist mainly of local emergency services personnel, and include engineers, medical personnel, and specially trained search dogs. (Federal Emergency Management Agency 9/11/2001; Associated Press 9/12/2001) Four of these teams have been deployed to the Pentagon, to search for victims there. (Federal Emergency Management Agency 9/11/2001; Ballard and Lunney 9/11/2001) And FEMA sent an “advance element team” to the WTC site earlier in the day. (White House 9/11/2001) FEMA’s operations in response to the attacks also include monitoring the air quality following the release of asbestos from the WTC and the Pentagon, finding a place to dispose of rubble, and providing counseling for families and rescue workers. (Associated Press 9/12/2001)