This page can be viewed at http://www.historycommons.org/entity.jsp?entity=peter_franck

Positions that Peter Franck has held:

Peter Franck was a participant or observer in the following events: 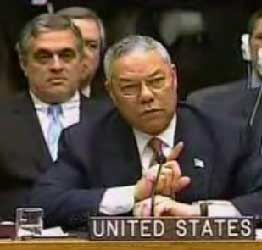 ) On March 7, ElBaradei will provide an additional update: “The IAEA has verified that previously acquired magnets have been used for missile guidance systems, industrial machinery, electricity meters and field telephones. Through visits to research and production sites, reviews of engineering drawings and analyses of sample magnets, IAEA experts familiar with the use of such magnets in centrifuge enrichment have verified that none of the magnets that Iraq has declared could be used directly for a centrifuge magnetic bearing.” (see March 7, 2003) (CNN 3/7/2003)
Iraq Attempted to Purchase Machines to Balance Centrifuge Rotors - Powell states: “Intercepted communications from mid-2000 through last summer show that Iraq front companies sought to buy machines that can be used to balance gas centrifuge rotors. One of these companies also had been involved in a failed effort in 2001 to smuggle aluminum tubes into Iraq.” (Powell 2/5/2003; Gordon 2/6/2003)
Powell Cites Documents Removed from Home of Iraqi Scientist Faleh Hassan - Powell cites the documents that had been found on January 16, 2003 by inspectors with the help of US intelligence at the Baghdad home of Faleh Hassan, a nuclear scientist. Powell asserts that the papers are a “dramatic confirmation” that Saddam Hussein is concealing evidence and not cooperating with the inspections. The 3,000 documents contained information relating to the laser enrichment of uranium (see January 16, 2003). (Coughlin 1/18/2003; Jahn 1/18/2003; BBC 1/19/2003; Powell 2/5/2003) A little more than a week later, in the inspectors’ February 14 update to the UN Security Council (see February 14, 2003), ElBaradei will say, “While the documents have provided some additional details about Iraq’s laser enrichment development efforts, they refer to activities or sites already known to the IAEA and appear to be the personal files of the scientist in whose home they were found. Nothing contained in the documents alters the conclusions previously drawn by the IAEA concerning the extent of Iraq’s laser enrichment program.” (Steele 2/15/2003; BBC 2/17/2003; Hanley 8/9/2003)
Iraq is Hiding Missiles in the Desert - Powell says that according to unidentified sources, the Iraqis have hidden rocket launchers and warheads containing biological weapons in the western desert. He further contends that these caches of weapons are hidden in palm groves and moved to different locations on a weekly basis. (Powell 2/5/2003) It will later be suggested that this claim was “lifted whole from an Iraqi general’s written account of hiding missiles in the 1991 war.” (Hanley 8/9/2003)
Iraq Has Scud Missiles - Powell also says that according to unnamed “intelligence sources,” Iraq has a few dozen Scud-type missiles. (Hanley 8/9/2003)
Iraq Has Weapons of Mass Destruction - Secretary of State Colin Powell states unequivocally: “We… have satellite photos that indicate that banned materials have recently been moved from a number of Iraqi weapons of mass destruction facilities. There can be no doubt that Saddam Hussein has biological weapons and the capability to rapidly produce more, many more.” Elsewhere in his speech he says: “We know that Saddam Hussein is determined to keep his weapons of mass destruction, is determined to make more.” (Powell 2/5/2003; CNN 2/5/2003)
Governments, Media Reaction Mixed - Powell’s speech will fail to convince many skeptical governments, nor will it impress many in the European media. But it will have a tremendous impact in the US media (see February 5, 2003 and After).