This page can be viewed at http://www.historycommons.org/entity.jsp?entity=phil_kerpen_1

Phil Kerpen was a participant or observer in the following events:

CNBC stock analyst Rick Santelli’s “impromptu” on-air “rant” against President Obama’s economic stimulus program, in which Santelli calls for a “tea party” protest and tells viewers he intends to begin organizing a “Chicago Tea Party,” galvanizes nascent “tea party” groups around the nation. Chicago radio producer Zack Christenson has already registered the Internet domain “chicagoteaparty.com” (see August 2008), and hours after Santelli’s rant Christenson puts up a “homemade” tea party Web site. A Chicago Libertarian activist, Eric Odom (see After November 7, 2008), puts up a similar site at “officialchicagoteaparty.com.” The next day, the short-lived “Nationwide Tea Party Coalition” forms. At the same time, a new Facebook group, “Rick Santelli is right, we need a Taxpayer (Chicago) Tea Party,” is created by Phil Kerpen of Americans for Prosperity, and is administered by Odom. The Facebook page leads back to a site called “taxpayerteaparty.com,” run by Americans for Prosperity. Simultaneously, Brendan Steinhauser, the campaign director of FreedomWorks (see March 2, 2009) and another administrator of the Facebook group, begins organizing “tea party” groups—or actually continues his efforts, since on February 9, 10 days before Santelli’s broadcast, he had contacted a Florida activist who had attended a FreedomWorks training session and asked her to organize a protest in Fort Myers. Steinhauser later writes that the day after Santelli’s broadcast: “I just wrote this little 10 quick easy steps to hold your own tea party, wrote it up, and kinda was proud of it and sent it to Michelle Malkin. She linked to it from her blog.” Malkin’s blog is overwhelmed by the response. FreedomWorks staffers call activists around the country asking them to organize “grassroots” tea party organizations, and on March 9, FreedomWorks announces a nationwide “Tea Party Tour,” saying in a statement, “From [Santelli’s] desperate rallying cry FreedomWorks has tapped into the outrage building from within our own membership as well as allied conservative grassroots forces to organize a 25-city Tea Party Tour where taxpayers angry that their hard-earned money is being usurped by the government for irresponsible bailouts, can show President Obama and Congressional Democrats that their push towards outright socialism will not stand.” By February 27, the first official “tea party” events take place, organized by the Sam Adams Alliance, FreedomWorks, and Americans for Prosperity. Many of the original organizations will eventually be subsumed by, or merge with, national structures, again primarily organized and funded by FreedomWorks, Americans for Prosperity, and other right-wing lobbying organizations. Eventually, six nationwide networks will form (see August 24, 2010). (Hamsher 4/15/2009; Burghart and Zeskind 8/24/2010) During this period, conservative media outlets such as the Weekly Standard will claim that the tea party movement was entirely spontaneous in its origins (see March 2, 2009). However, facts stand in the way of that claim (see February 15, 2009, February 16, 2009, February 17, 2009, February 18, 2009, March 13, 2009 and After, April 2009 and After, April 6-13, 2009, April 8, 2009, April 14, 2009, April 15, 2009, April 16, 2009, July 23, 2009, July 24, 2009, August 4, 2009, August 4, 2009, August 5, 2009, August 6, 2009, August 6-7, 2009, August 10, 2009, August 10, 2009, August 11, 2009, August 28, 2009, July 3-4, 2010, August 30, 2010, and September 20, 2010). 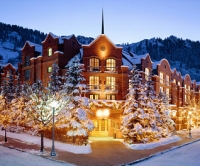 The exterior of the St. Regis Resort in Aspen, Colorado. [Source: Real Aspen (.com)]The reclusive but highly influential Charles Koch, of the Koch brothers oil empire (see 1977-Present, 1979-1980, 1997, 1981-2010, 1984 and After, Late 2004, May 6, 2006, April 15, 2009, May 29, 2009, November 2009, December 6, 2009, April 2010 and After, and July 3-4, 2010), holds a private meeting with some 200 wealthy financial and political figures at the exclusive St. Regis Resort in Aspen, Colorado. The meeting is designed to bring the participants together to combat what Koch calls “the threats posed to American freedom and prosperity” by Democrats and the Obama administration. To that end, many of the sessions in the two-day event target methods and plans to influence and manipulate the upcoming 2010 midterm elections. The meeting is highly secretive, with participants warned not to discuss the proceedings with anyone, especially members of the media, but in August, the liberal news Web site Think Progress will obtain a copy of a September 2010 memo from Koch that contains the June 2010 event program. The various events include:

a seminar on “The Bankrupting of America”;

a seminar on the “regulatory assault” on environmental concerns and how to further business goals by defeating environmental regulations;

a seminar on how to influence universities and colleges to “advance liberty”;

a seminar on how to “micro-target” the electorate in order to win elections for conservative Republican candidates;

a seminar on “The Threats to American Freedom and Prosperity” conducted by Koch himself;

a seminar on “An Integrated Strategy to Face These Threats,” moderated by Koch’s senior assistant Richard Fink;

an evening address, “Is America On the Road to Serfdom?” by former Fox News talk show host Glenn Beck;

a seminar, “We’re Spending Too Much,” on how to lower government spending, conducted by Russ Roberts of the far-right libertarian Mercatus Center;

a seminar, “Understanding This Year’s Electorate,” by journalist and AEI fellow Michael Barone;

a follow-up seminar on how to “Fram[e] the Debate on Spending” for the elections, moderated by members of AEI and the Mercatus Center;

a seminar, “Mobilizing Citizens for November,” featuring Tim Phillips, the head of AFP (see August 6, 2009) and Karl Crow, the head of Themis, the Koch-funded computer database being used in “micro-targeting” voters (see April 2010 and After);

a seminar hosted by Arthur Brooks of AEI on how to frame the “fight” as one between “free enterprise and Big Government”;

a seminar on how best to target participants’ philanthropic gifting;

a seminar on “reforming” K-12 public and charter schools;

a seminar on impacting judicial elections in several key states;

a seminar on transitioning from the 2010 elections to the 2012 presidential elections and how “supporters of economic freedom” can “start planning today” for that election;

a final evening address, “What’s Ahead for America?” by noted neoconservative columnist and Fox News pundit Charles Krauthammer.
The event features David Chavern, a senior official at the US Chamber of Commerce, one of the entities contributing the most funding to conservative political organizations (see August 2, 2010, September 13-16, 2010, and October 2010). Think Progress’s Lee Fang will write: “In an election season with the most undisclosed secret corporate giving since the Watergate-era, the memo sheds light on the symbiotic relationship between extremely profitable, multi-billion dollar corporations and much of the conservative infrastructure. The memo describes the prospective corporate donors as ‘investors,’ and it makes clear that many of the Republican operatives managing shadowy, undisclosed fronts running attack ads against Democrats were involved in the Koch’s election-planning event.” Many of the “investors” listed as attending or participating in the events include executives from health care corporations; executives from fast-food and other food-industry executives who have fought against providing health insurance to their employees; an array of banking and financial executives; and a number of energy industry executives. Fred Malek, who serves as the top fundraiser for a $56 million attack ad campaign against Democrats (see Mid-October 2010), attends, as does Heather Higgins of the Independent Women’s Forum, another organization that has spent millions opposing health-care reform. Many of the election-focused seminars address how to take advantage of the Citizens United ruling that lifted restrictions on corporate election spending (see January 21, 2010). The Aspen meeting, as with earlier meetings, is managed by Kevin Gentry, a Koch Industries executive and Washington lobbyist. (Fang 8/23/2010; Koch 9/24/2010