This page can be viewed at http://www.historycommons.org/entity.jsp?entity=philadelphia_inquirer_1

Philadelphia Inquirer was a participant or observer in the following events: 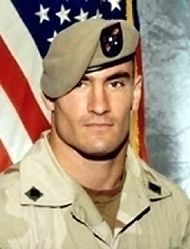 Corporal Pat Tillman. [Source: US Army / Public domain]St. Louis Cardinals safety Pat Tillman visits the team complex in Tempe, Arizona to tell his coach he will enlist in the Army. Although he has been offered a three-year, multi-million dollar contract, he wants to become a US Ranger and fight in Afghanistan. He clears his locker and sees to his insurance, but does not yet disclose his plan to teammates. (East Valley Tribune (Mesa) 5/29/2002) However, the story breaks the next day. (Orlando Sentinel 5/26/2002) Both Tillman and his brother, Kevin Tillman, a former minor league baseball player in Cleveland, dodge media attention by refusing to be interviewed and driving to Denver, Colorado to enlist, rather than enlist in their home state of Arizona where they are better known. (Express (London) 5/30/2002; Freeman 6/1/2002)
Tillman Does Not Want to Be 'Poster Boy' for Military - Tillman continues to refuse media interviews, denying requests from sources such as the New York Times and Sports Illustrated, as well as most major television networks. He asks that the Army not “use him as a poster boy.” (San Jose Mercury News 5/29/2002) Nancy Hutchinson, a public affairs officer for Army recruitment in Phoenix, Arizona, confirms that Tillman has requested that the military not publicize his enlistment and says that this should ensure his privacy. (East Valley Tribune (Mesa) 5/29/2002)
Lionized by Media - Despite Tillman’s best efforts to avoid the limelight, the media gives the story widespread coverage, characterizing him as a “hero” and “an inspiration.” (Orlando Sentinel 5/26/2002; Daily Herald(Arlington Heights) 5/27/2002) The Philadelphia Inquirer writes that his desire to join the Rangers is “a special calling,” and that both brothers are “volunteering to give up the life of privilege and perks for the opportunity to kill terrorists.” The Tampa Tribune describes Tillman as that “one in a million” who has “got your back.” The Tribune interviews former Rangers who recount the extreme hardships recruits endure, noting that “65 percent of would-be Rangers” do not complete the training. However, it predicts that the Tillmans will go on to “defend our country.” Former Education Secretary William Bennett calls Tillman “a patriot, somebody with a deep, abiding love for our people, our country, and constitution.” (Tampa Tribune 5/26/2002; Lyon 5/27/2002) Although Tillman never discusses his reasons for wanting to join the Rangers publicly (East Valley Tribune (Mesa) 5/29/2002; Freeman 6/1/2002) , several news stories see his choice as a patriotic reaction to the events of 9/11, with David Whitely of the Orlando Sentinel writing, “Oh, for Osama bin Laden to run a crossing pattern in front of Pvt. Tillman.” (Orlando Sentinel 5/26/2002)