This page can be viewed at http://www.historycommons.org/entity.jsp?entity=physicians_for_human_rights_1

Physicians for Human Rights was a participant or observer in the following events:

October 7, 2003: ACLU Requests Documents from US Government on Treatment of Detainees

The American Civil Liberties Union (ACLU), in partnership with the Center for Constitutional Rights, Physicians for Human Rights, Veterans for Common Sense, and Veterans for Peace, file a Freedom of Information Act (FOIA) request for records concerning the treatment of prisoners and detainees in US custody abroad, most specifically Iraq and Afghanistan. The request is the first spark in a firestorm of legal controversies, FOIA requests, government denials, and lawsuits, as the ACLU and its partners continue to attempt to squeeze documentation out of an uncooperative administration. Although the government will continue to withhold key records, ongoing litigation results in the eventual release of over 100,000 documents, which will be used by ACLU lawyers Jameel Jaffer and Amrit Singh to compile the book Administration of Torture (see October 22, 2007), which will show that detainees have been (and will be) systematically tortured and abused under the orders of senior government officials. (Union 10/7/2003; American Civil Liberties Union 10/22/2007)

April 21, 2008: Guantanamo Detainees Claim to Have Been Drugged While in Custody 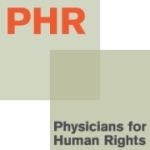 Physicians for Human Rights logo. [Source: Newsguide (.us)]Retired Army Major General Antonio Taguba, who led the probe into prisoner torture and abuse at Baghdad’s Abu Ghraib prison (see March 9, 2004), accuses the Bush administration of committing “war crimes,” and calls for Bush officials to be held accountable. Taguba’s remarks are part of a wide-ranging report on US torture by the human rights organization Physicians for Human Rights (PHR). The report, released today, finds that US personnel tortured and abused detainees in Iraq, Afghanistan, and Guantanamo Bay, using beatings, electrical shocks, sexual humiliation, sleep deprivation, isolation, being hung from ceilings, and other practices. One prisoner was forced to drink urine. “After years of disclosures by government investigations, media accounts, and reports from human rights organizations, there is no longer any doubt as to whether the current administration has committed war crimes,” Taguba wrote in the report. “The only question that remains to be answered is whether those who ordered the use of torture will be held to account.” PHR calls the report the most complete medical and psychological examination of former detainees to date. The report focuses on statements from, and medical examinations of, 11 detainees held for long periods of time in various US-run prisons and facilities before being released without charges. The report, titled “Broken Laws, Broken Lives,” concurs with an investigation of Guantanamo conducted by investigative reporters for McClatchy News. PHR president Leonard Rubenstein says there was a direct connection between the Pentagon’s authorizations of extreme interrogation methods and the abuses his organization documented. “The result was a horrific stew of pain, degradation, and… suffering,” he says. (Physicians for Human Rights 6/2008; Strobel 6/18/2008)