This page can be viewed at http://www.historycommons.org/entity.jsp?entity=podblanc_1

Podblanc was a participant or observer in the following events:

A popular image of Adolf Hitler, created in the style of the 2008 Obama campaign poster and using the campaign slogan ‘Yes We Can,’ posted on Podblanc in 2009. [Source: Podblanc / OccupiedOregon (.com)]Avowed white supremacist Craig Cobb (see October 31, 2005) moves to Estonia and founds Podblanc, an Internet-based videosharing Web site. It is similar to YouTube, but Cobb and his supporters refuse to use that facility, calling it “Jew Tube” because its operators censor racist and anti-Semitic content. Podblanc offers over 1,000 channels of video content, including combat handgun training, bomb-making tutorials, a description of security measures at three northern California synagogues, and an audio recording of The Turner Diaries, the infamous race-war fantasy novel (see 1978). The most popular video on the site shows Russian neo-Nazis beheading and shooting Asiatic immigrants; other popular videos show skinheads attacking random Jewish and minority victims. Cobb was a member of the violent World Church of the Creator (WCOTC) until its collapse after its leader, Matthew Hale, was arrested for soliciting the murder of a judge (see January 9, 2003 and 2004-2005). Cobb posted the name and home address of the judge on the internet, which may have led to the murder of her husband and mother (see February 28, 2005). Cobb has also attended events sponsored by the neo-Nazi National Alliance (see 1970-1974), and distributes “The Aryan Alternative,” a white supremacist periodical written by Alex Linder, the founder of the Vanguard News Network (VNN), and published by former White Patriot Party leader Glenn Miller. Cobb documents WCOTC, VNN, and other organizations and events on Podblanc. Estonian authorities will force Cobb to leave their country in 2009; in 2010, Podblanc will go dormant when its host decides to refuse to carry its racist and violent content any longer. (Southern Poverty Law Center 6/2007; Southern Poverty Law Center 6/2009; Anti-Racist Canada 6/25/2010) 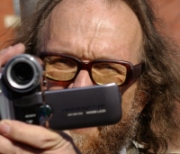 Craig Cobb. [Source: The Liberty Lamp (.com)]Avowed white supremacist Craig Cobb attempts to disrupt the viewing of the body of Rosa Parks, the celebrated African-American civil rights figure, who is lying in state in the US Capitol Rotunda. Over 50,000 people wait in line to view her body. Cobb accosts many of them while they stand outside the Rotunda; many later recall being horrified and offended by the racist epithets stated by the stringy-haired man in horn-rimmed glasses carrying a videocamera. Cobb apparently delights in offending and angering the people in line, telling them: “Rosa Parks was a sh_tskin communist. I’m here to celebrate her death.” He is eventually escorted away by Secret Service agents. Cobb is a neo-Nazi who later founds Podblanc, an Internet-based videosharing Web site (see Late 2005 or Early 2006 and After). (Southern Poverty Law Center 6/2009)