This page can be viewed at http://www.historycommons.org/entity.jsp?entity=presidential_emergency_operation_center

Presidential Emergency Operation Center (PEOC) was a participant or observer in the following events: 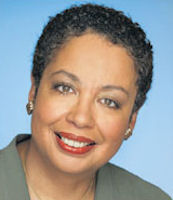 Anna Perez. [Source: Paul Drinkwater / NBC Universal]Government officials in the Presidential Emergency Operations Center (PEOC) below the White House are frustrated at technical problems they have with the televisions in the center, which mean they are unable to get audio from both the TV broadcast channels and the videoconferencing system at the same time. (Rice 11/1/2001; Thomas 12/30/2001) Two large television screens are built into a wall of the PEOC conference room, and, according to journalist and author Stephen Hayes, for most of the day one of them is tuned to CNN and the other to the Fox News Channel. Hayes will write, “Watching the uninterrupted news coverage not only provided new and timely information; it also allowed officials in the shelter [i.e. the PEOC] to understand, as they designed their public response, what exactly the American people were seeing.” (Hayes 2007, pp. 337, 342)
Officials Have Problems with Television and Video Conference Audio - But, National Security Adviser Condoleezza Rice will later recall, the “only frustration” among those in the PEOC is “that we kept having trouble getting the TV to work.… [W]e were having trouble with the, some of the video link.” Therefore, “if you were trying to do the video conference, you had trouble doing TV.” (Rice 11/1/2001) The “video conference” Rice refers to is presumably the White House video teleconference being conducted by counterterrorism chief Richard Clarke (see (9:10 a.m.) September 11, 2001 and 9:25 a.m. September 11, 2001). (9/11 Commission 7/24/2004, pp. 36) Anna Perez, Rice’s communications counselor, will add, “[Y]ou couldn’t do the SVTS [secure video teleconference system] at the same time you could do the CNN.” (Rice 11/1/2001) Eric Edelman, a member of Vice President Dick Cheney’s staff, will recall: “[T]he video conference that Dick Clarke was chairing was going on.… [W]e could see that, so that was on the screen, we could follow that. Not always with audio… sometimes with audio, sometimes not.” (Edelman 10/25/2001) According to Hayes, however, the problem is in fact that “[a]lthough the two televisions on the wall could be tuned to different channels, they could get audio from only one.” Consequently, “On several occasions, the officials could see notices of ‘breaking news’ without being able to hear the details of those updates.” (Hayes 2007, pp. 342)
'Everybody' in PEOC Frustrated by TV Problem - Rice will recall that the problem with the televisions is “kind of frustrating to everybody.” (Rice 11/1/2001) One unnamed official will recall that Cheney, who is in the PEOC for much of the day, is “cranked up” about the problem and repeatedly demands that it be fixed. (Hayes 2007, pp. 342) Mary Matalin, a counselor to Cheney, will recall, “You can have sound on one or the other [i.e. the TV broadcasts or the video teleconference], and [Cheney] found that technically imperfect.” (CNN 9/11/2002; CNN 9/14/2002) According to Newsweek, this is the only thing that causes Cheney’s composure to break and leads to him showing any irritation while he is in the PEOC. (Thomas 12/30/2001)
Accounts Conflict over Whether Problem Is Fixed - It is unclear whether this technical problem with the televisions gets fixed. According to Perez, PEOC personnel are able to fix it. “It took them a little while, but they did get it together. They got it right,” she will say. (Rice 11/1/2001) But according to Hayes, the problem remains unfixed. (Hayes 2007, pp. 342) Clarke will later give a different account of the problem with getting audio from television broadcasts and the video conference simultaneously. He will write that when he goes down to the PEOC sometime around midday (see (Shortly Before 12:30 p.m.) September 11, 2001), Army Major Mike Fenzel complains to him, “I can’t hear the crisis conference because Mrs. Cheney [Lynne Cheney, the wife of the vice president] keeps turning down the volume on you so she can hear CNN.” (Clarke 2004, pp. 18)