This page can be viewed at http://www.historycommons.org/entity.jsp?entity=princeton_university_1

Princeton University was a participant or observer in the following events:

August 4, 2008: Conservative Radio Host Hannity: No One Can Claim He or Other Conservatives Have ‘Made an Issue of Obama’s Race;’ Facts Prove Otherwise 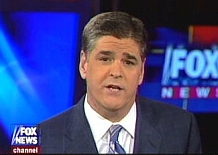 Sean Hannity. [Source: Halogen Guides (.com)]Conservative radio show host Sean Hannity tells his listeners that Democratic presidential candidate Barack Obama “can’t point to a single instance in which President Bush or [Republican candidate John] McCain or [Bush political adviser] Karl Rove or Sean Hannity or talk radio or any other major Republican has made an issue of Obama’s race.” Hannity’s claim is proven false by data collected by progressive media watchdog organization Media Matters. Hannity himself asked his audience on March 2, 2008, “Do the Obamas have a race problem of their own?” He has also repeatedly distorted the content of Michelle Obama’s 1985 Princeton University senior thesis to suggest that Mrs. Obama believes, in Hannity’s words, “blacks must join in solidarity to combat a white oppressor.” (Mrs. Obama was documenting the attitudes of some black Princeton alumni from the 1970s and not expressing her own views.) (Media Matters 8/7/2008) Media Matters has also documented numerous examples of other radio and TV personalities making “an issue of Obama’s race” (see January 24, 2007, February 1, 2008, May 19, 2008, June 2, 2008, June 26, 2008, and August 1, 2008 and After). The issue of race will continue with conservative pundits and radio hosts (see August 25, 2008, September 22, 2008, October 7, 2008, October 20, 2008, October 22, 2008, October 28, 2008, and November 18, 2008).