This page can be viewed at http://www.historycommons.org/entity.jsp?entity=rabah_chekat_bais_1

Rabah Chekat-Bais was a participant or observer in the following events: 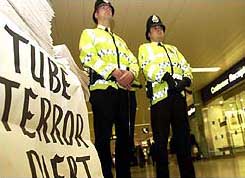 Heightened security on the London Underground. [Source: BBC]Three men are arrested in London and charged under the Terrorism Act 2000 for the possession of articles for the preparation, instigation, and commission of terrorism acts. The Sunday Times breaks the story and claims that MI5 and police have foiled a major plot to release cyanide gas on the London Underground (the Tube), which is used by three million commuters each day. The men, all of North African origin, are also alleged to have links with al-Qaeda. They are Rabah Chekat-Bais, 21, Rabah Kadris, in his mid-30s, and Karim Kadouri, 33, all unemployed and of no fixed address. Kadris is the librarian at Finsbury Park Mosque, which is perceived by many officials to be a hotbed of radicalism. (BBC 11/17/2002) Magnus Ranstorp, an expert in international terrorism at the University of Saint Andrews in Scotland says “cyanide has surfaced a number of times surrounding al-Qaeda’s chemical program.” Video obtained by CNN in August shows tests of a chemical agent, presumed to be cyanide, on dogs at a camp in Afghanistan. Documentation recovered in Afghanistan also reveals al-Qaeda’s interest in chemical weapons. The Ministry of Defense simulated biological attacks on the underground in the early 1960s, during the Cold War. Scientists mixed harmless spores of the anthrax analogue Bacillus globigii with talcum powder and released them on the Northern Line. They found that the spores dispersed to every one of the several dozen stations on that line. The Defense scientists projected disastrous consequences in the event of a genuine attack. A London Underground spokeswoman, addressing the alleged cyanide threat, refused to comment on the counter measures currently in place but says, “we are always speaking to police and reviewing what we can do,” adding, “all our staff are well trained to look out for the unusual.” Governments around the world warn their citizens of possible terrorist attacks, and Prime Minister Tony Blair urges the public to be vigilant. (Knight 11/18/2002) In fact, no such plot has been discovered. The government moves quickly to play down connections between the arrest of the three men and a threat to the Tube. It is disclosed to the press that the men had been in contact with British residents in London and that the charges related to false passports and credit cards, but not explosives or chemicals. A police source says there was “no bomb-making paraphernalia” in their possession. Three other men arrested at the same time are released later in the week. (Wilson and Norton-Taylor 11/18/2002) Deputy Prime Minister John Prescott, commenting on the Times story, says the arrests had “excited the press.” He adds “as the Prime Minister reminds us, we get an awful lot of intelligence which we have to make judgments about. In this case it does not appear there is any evidence whatsoever there was going to be a gas attack or use of bombs regarding the three people who have been arrested.” A Home Office spokesman says, “The Prime Minister has made it clear that there are threat reports every day and these are assessed. If the government or police thought it was necessary to give the public a specific warning about any venue, including the Underground, it would do it without hesitation.” (BBC 11/17/2002) Security sources indicate that separate intelligence from abroad points to Islamist extremists planning such an attack. Sources say that there is “a clear intention” to attack the underground and other targets in Britain and Western Europe. Whitehall sources say the arrests of the three men reflect a determination among the security services to disrupt suspect terrorists and networks “at an early stage.” (Wilson and Norton-Taylor 11/18/2002) The three arrested men make a 15-minute appearance in court on November 18. The court hears that the three have never been questioned by police about the alleged plot. According to lawyers for the three men, the details of the alleged plot had not been disclosed to them and had only emerged in the press over the last few days. The three suspects are remanded in custody for four weeks by district judge Timothy Workman and appear again on December 16. Two of the suspects subsequently plead guilty, under ordinary criminal laws, to passport offenses. (Allen 11/18/2002)