This page can be viewed at http://www.historycommons.org/entity.jsp?entity=rader_clinic_1

Rader Clinic was a participant or observer in the following events: 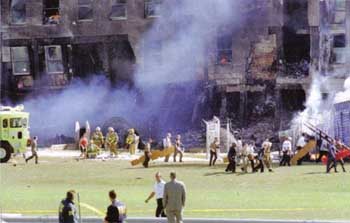 ; Goldberg et al. 2007, pp. 114) According to a federally funded report on the emergency response to the Pentagon attack, communications systems had been busy “even before American Airlines Flight 77 crashed into the Pentagon.” But when the crash occurs, “all area communications [seem] simultaneously overwhelmed.” (US Department of Health and Human Services 7/2002, pp. A34

) The Defense Department’s book about the Pentagon attack later describes, “Almost immediately radio traffic gridlocked, land lines were unavailable, and cellular telephone networks became so overloaded that for a time Pentagon officials and employees as well as some emergency responders could not call outside.” (Goldberg et al. 2007, pp. 114) This leads to significant problems: “Firefighters calling the [Arlington County Emergency Communications Center] couldn’t get through. Relatives of Pentagon workers found cellular and land lines jammed.” (US Department of Health and Human Services 7/2002, pp. A34

) The DiLorenzo Tricare Health Clinic at the Pentagon and the Rader Clinic at nearby Fort Myer are unable to establish reliable communications. Reportedly, “Hospitals and clinics could not be informed about the flow of casualties, and perhaps more damaging, communication between the fire and rescue and the emergency medical elements on-site was severely impaired.” (Goldberg et al. 2007, pp. 114) Officer Aubrey Davis of the Pentagon police heads to the crash site with Defense Secretary Donald Rumsfeld immediately after the Pentagon is hit. He receives frantic pleas over his radio, regarding Rumsfeld’s whereabouts. But, as Davis later recalls, “the system was overloaded, everyone on the frequency was talking, everything jumbled, so I couldn’t get through and they went on asking” (see (9:38 a.m.-10:00 a.m.) September 11, 2001). (Cockburn 2007, pp. 1-2) Cellular and landline telephone communications remain “virtually unreliable or inaccessible during the first few hours of the response.” But later on, in the afternoon, Verizon technicians and Secret Service technical staff install portable cellular towers at the Pentagon, and this significantly increases cell phone access. (US Department of Health and Human Services 7/2002, pp. C36

) Communications problems are experienced not just around the Pentagon but also in the broader Washington area, with some senior government officials being affected (see (After 8:55 a.m.) September 11, 2001). (Verton 2003, pp. 149)