This page can be viewed at http://www.historycommons.org/entity.jsp?entity=radio_corporation_of_america_1

Radio Corporation of America (RCA) was a participant or observer in the following events:

The NSA, working with British intelligence, begins secretly intercepting and reading millions of telegraph messages between US citizens and international senders and recipients. The clandestine program, called Operation Shamrock and part of a larger global surveillance network collectively known as Echelon (see April 4, 2001 and Before September 11, 2001), begins shortly after the end of World War II, and continues through 1975, when it is exposed by the “Church Committee,” the Senate investigation of illegal activities by US intelligence organizations (see April, 1976). (Campbell 7/25/2000) The program actually predates the NSA, originating with the Armed Forces Security Agency (AFSA) then continuing when that turned into NSA (see 1952). (Ponder 5/13/2006) The program operates in tandem with Project Minaret (see 1967-1975). Together, the two programs spy on both foreign sources and US citizens, especially those considered “unreliable,” such as civil rights leaders and antiwar protesters, and opposition figures such as politicians, diplomats, businessmen, trades union leaders, non-government organizations like Amnesty International, and senior officials of the Catholic Church. The NSA receives the cooperation of such telecommunications firms as Western Union, RCA, and ITT. (Campbell 7/25/2000) (Those companies are never required to reveal the extent of their involvement with Shamrock; on the recommendations of Defense Secretary Donald Rumsfeld and presidential chief of staff Dick Cheney, in 1975 President Ford extends executive privilege to those companies, precluding them from testifying before Congress.) (Ponder 5/13/2006) In the 1960s, technological advances make it possible for computers to search for keywords in monitored messages instead of having human analysts read through all communications. In fact, the first global wide-area network, or WAN, is not the Internet, but the international network connecting signals intelligence stations and processing centers for US and British intelligence organizations, including the NSA, and making use of sophisticated satellite systems such as Milstar and Skynet. (The NSA also builds and maintains one of the world’s first e-mail networks, completely separate from public e-mail networks, and highly secret.) At the program’s height, it operates out of a front company in Lower Manhattan code-named LPMEDLEY, and intercepts 150,000 messages a month. In August 1975, NSA director Lieutenant General Lew Allen testifies to the House of Representatives’ investigation of US intelligence activities, the Pike Committee (see January 29, 1976), that “NSA systematically intercepts international communications, both voice and cable.” He also admits that “messages to and from American citizens have been picked up in the course of gathering foreign intelligence,” and acknowledges that the NSA uses “watch lists” of US citizens “to watch for foreign activity of reportable intelligence interest.” (Campbell 7/25/2000) The Church Committee’s final report will will call Shamrock “probably the largest government interception program affecting Americans ever undertaken.” (Church Committee 4/23/1976) Shortly after the committee issues its report, the NSA terminates the program. Since 1978, the NSA and other US intelligence agencies have been restrained in their wiretapping and surveillance of US citizens by the Foreign Intelligence Surveillance Act (see 1978). Admiral Bobby Ray Inman, who will become the NSA’s director in 1977, and who testifies before the Church Committee as director of Naval Intelligence, will later say that he worked actively to help pass FISA: “I became convinced that for almost anything the country needed to do, you could get legislation to put it on a solid foundation. There was the comfort of going out and saying in speeches, ‘We don’t target US citizens, and what we do is authorized by a court.’” (Ponder 5/13/2006) Shamrock is considered unconstitutional by many US lawmakers, and in 1976 the Justice Department investigates potential criminal offenses by the NSA surrounding Shamrock. Part of the report will be released in 1980; that report will confirm that the Shamrock data was used to further the illegal surveillance activities of US citizens as part of Minaret. (Campbell 7/25/2000)

After 9/11, the NSA will once again escalate its warrantless surveillance of US citizens, this time monitoring and tracking citizens’ phone calls and e-mails (see After September 11, 2001). It will also begin compiling an enormous database of citizens’ phone activities, creating a “data mine” of information on US citizens, ostensibly for anti-terrorism purposes (see October 2001). 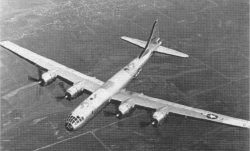 A B-29 bomber similar to the one that crashed in Georgia. [Source: Global Security (.org)]A test flight for the Air Force’s Project Banshee, located at Robins Air Force Base in Georgia, is set for 8:30 a.m. Banshee is an attempt begun in 1946 to develop and deploy a long-range missile ahead of both the Soviet Union and rival US military branches. The airplane used in the test flight crashes less than an hour into its flight, killing 9 of the 13 aboard.
Maintenance Problems - The plane assigned for the flight is a B-29 Stratofortress, a bomber made famous by its delivery of the atomic bombs to Hiroshima and Nagasaki at the end of World War II. B-29s are notoriously difficult to fly and maintain: their four wing-mounted engines almost routinely overheat and catch fire, causing engine shutdowns, sudden drops in altitude, and, often, crashes. The engines’ eighteen cylinders lack sufficient airflow to keep them cool, and the overheating often causes the crankcases, made of light but highly flammable magnesium, to burst into flames. Like so many of its brethren, the plane has suffered its share of maintenance issues, and is flying without numerous recommended maintenance and repair tasks being performed. Just five days before, it had been designated “red cross”—grounded and unfit for service. It was allowed to fly through an “exceptional release” signed by the squadron commander.
Crew Difficulties - The flight is moved back to the afternoon after some crew members fail to show up on time, and to allow last-minute repairs to be made. By takeoff, the flight crew is assembled: Captain Ralph Erwin; co-pilot Herbert W. Moore; flight engineer Earl Murrhee; First Lieutenant Lawrence Pence, Jr, the navigator; Sergeant Walter Peny, the left scanner; Sergeant Jack York, the right scanner; Sergeant Melvin Walker, the radio operator; and Sergeant Derwood Irvin, manning the bombsight and autopilot. The crew is joined by civilian engineers assigned to Banshee: Al Palya and Robert Reynolds from RCA, William Brauner and Eugene Mechler from the Franklin Institute, and Richard Cox from the Air Force’s Air Materiel Command. In violation of standard procedure, none of the crew or the civilians are briefed on emergency procedures, though Murrhee will later say that the crew were all familiar with the procedures; he is not so sure about the civilians, though he knows Palya and Reynolds have flown numerous test flights before. In another violation of Air Force regulations, none of the flight crew have worked together before. As author Barry Siegel will note in 2008, “The pilot, copilot, and engineer had never shared the same cockpit before.”
Engine Fire and Crash - Less than an hour into the flight, one engine catches fire and two others lose power, due to a combination of maintenance failures and pilot errors. The civilians have some difficulty getting into their parachutes as Erwin and Moore attempt to regain control of the aircraft. Four of the crew and civilians manage to parachute from the plane, but most remain on board as the airplane spirals into the ground on the edge of the Okefenokee Swamp, near Waycross, Georgia. Crew members Moore, Murrhee, and Peny survive, as does a single civilian, Mechler. Four others either jump at too low an altitude or die when their chutes foul the airplane; the other five never manage to leave the plane and die on impact.
Widows File Suit - Several of the civilians’ widows will file suit against the US Air Force, asserting that their husbands died because of Air Force negligence (see June 21, 1949). Their lawsuit will eventually become US v. Reynolds, a landmark Supreme Court case and the underpinning for the government’s claims of state secrets privilege (see March 9, 1953). (Siegel 2008, pp. 3, 14-17, 33-49)

Initial Associated Press reports of a crash in Georgia of a B-29 that had been on a test flight for the Air Force’s secret Project Banshee (see October 6, 1948) acknowledge that “the plane had been on a mission testing secret electronic equipment which RCA developed and built under an Air Force contract… Full details of the plane’s mission were not disclosed.… The Air Force would say only that the bomber was engaged in ‘electronic research on different types of radar…’” Local papers have a bit more detail, with survivor accounts hinting at confusion and some contradictions between their versions of events and that being given out by official Air Force spokesmen. Later reports from the Air Force will downplay the B-29’s involvement in Project Banshee. (Siegel 2008, pp. 56-58)

Frank Folsom, the executive vice president of the Radio Corporation of America’s RCA Victor Division, writes a letter to General Hoyt Vandenberg, the commander of the US Air Force. Folsom is inquiring about the deaths of two RCA employees in a recent B-29 crash in Georgia (see October 6, 1948). The plane had been on a secret test mission for the Air Force’s Project Banshee, a missile development project in which RCA is heavily involved. Folsom believes that the Air Force is downplaying the likelihood that pilot error caused the crash (see October 18, 1948), and tells Vandenberg that “certain steps will [need to be taken] if we are to participate in the future in Air Force flight test programs.” Folsom wants more pay and compensation for RCA employees participating in Air Force test programs, as well as newer and safer airplanes to be used in the test flights and a higher caliber of test pilots and crew members. Perhaps the portion of the letter that causes the most consternation among Air Force officials is Folsom’s request to read over the official accident reports. “When a crash has occurred, a copy of the official report… must be made available promptly to us,” he writes. “Needless to say, the report will not be disclosed except to those who are directly concerned.” Folsom’s letter will spark a new round of Air Force investigations into the crash, in hopes of mollifying Folsom. However, the report from this investigation will be classified at the highest level of security and not provided to RCA. Additionally, though the second investigation will find a strong likelihood of pilot error causing the crash, the Air Force will not admit any such findings to RCA. (Siegel 2008, pp. 65-80) These accident reports will play a key role in the lawsuit filed against the US government by three widows of killed crew members (see June 21, 1949 and August 7-8, 1950).