This page can be viewed at http://www.historycommons.org/entity.jsp?entity=ralph_carmona_1

Ralph Carmona was a participant or observer in the following events: 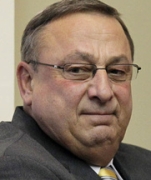 Paul LePage. [Source: Portland Press-Herald]Maine Governor Paul LePage (R-ME) says that the NAACP can “kiss my butt” after explaining why he is refusing to attend any events honoring the late Dr. Martin Luther King Jr. on King’s national holiday. LePage tells a local reporter that he considers the NAACP a “special interest” group, and adds: “End of story. And I’m not going to be held hostage by special interests. And if they want, they can look at my family picture. My son happens to be black, so they can do whatever they’d like about it.” Asked if his absence is an indication of a pattern rather than an isolated incident, LePage responds: “Tell ‘em to kiss my butt. If they want to play the race card, come to dinner and my son will talk to them.” LePage, a tea party-backed candidate who was sworn into office last week, has an adopted son of Jamaican heritage. Maine NAACP director Rachel Talbot Ross responds: “I don’t care who he’s got in his family. And he’s saying we’re playing the race card? The makeup of his family isn’t the issue and it never was the issue. For him to say we’re playing the race card shows a real lack of awareness of the very important issues we’re working to address. Our kids deserve better. Maine deserves better. His son deserves better.” Ross goes on to call LePage’s comments “ignorant,” and adds, “We don’t want to misinterpret his intention, but the message we’re getting is that we’re not welcome and we’re not part of the Maine he’s preparing to lead for the next four years.” Ralph Carmona, spokesman for the League of United Latin American Citizens, says LePage’s comments today put him in mind of his fall campaign promise to tell President Obama to “go to hell.” Carmona says: “The governor’s comments are creating, have the potential to create, a real racial dilemma for all Mainers. It is astonishing and troubling he would use this kind of rhetoric.” LePage later adds that he has prior personal and professional commitments that prevent him from attending events in honor of King. NAACP leaders say LePage has previously turned down a number of invitations from the group in recent months. LePage spokesman Dan Demeritt later sends out a statement denying the issue has anything to do with race, and notes that while mayor of Waterville, LePage attended several Martin Luther King Day breakfasts. Demerrit says: “This is not about race. Paul has a black son. This is about a special interest group taking issue with the governor for not making time for them and the governor dismissing their complaints in the direct manner people have come to expect from Paul LePage.” Demerrit calls LePage “very free spoken.” (Cover 1/14/2011; Seitz-Wald 1/14/2011; Bouchard 1/14/2011) Maine’s Congressional delegation, whose members are all either attending the MLK Day events in person or sending representatives, declines to comment on LePage’s remarks. NAACP president Benjamin Jealous calls LePage’s comments “inflammatory,” and issues a statement reading in part: “Gov. LePage’s decision to inflame racial tension on the eve of the King holiday denigrates his office. His words are a reminder of the worst aspects of Maine’s history and out of touch with our nation’s deep yearning for increased civility and racial healing.” (Cover 1/15/2011) Washington Post columnist Jonathan Capehart, an African-American, says of LePage’s comments: “Wow. Uncivil. Uncouth. Appalling. Reducing the NAACP and its venerable history of fighting for civil rights to ‘special interests’ is pure ideological laziness in the extreme.” He continues: “Just because LePage has a black son (by adoption) doesn’t mean no one can or should question his racial sensitivities.… Despite LePage’s offensive posterior invitation, I urge the Portland, Maine, branch of the NAACP to keep inviting the rude governor to events. Blacks are only 1.2 percent of the state’s population. But sooner or later, LePage will have to learn that he can’t talk to citizens of his state like that.” (Capehart 1/14/2011) In previous years, Maine’s governor has alternated between breakfasts honoring King in Portland and Bangor. This year’s breakfast is being held in Portland. LePage has been issuing rejections to attend the King breakfast since December 2010. He intends to release a pre-recorded radio address honoring King’s legacy. Bob Talbot, a 70-year-old executive board member of the Greater Bangor Area NAACP, says he cannot remember when a Maine governor did not attend one of the breakfasts, with the sole exception of former Governor John Baldacci (D-ME), who attended President Obama’s inauguration in 2009 instead of attending one of the breakfasts. “Governor LePage keeps saying he represents all Mainers,” Talbot says. “Well, I’m an eighth-generation Mainer. I think he needs to reconsider what it means to be a Mainer. He needs to understand that we’re all Mainers, not just a certain few or a certain political party.” (Bouchard 1/14/2011)