This page can be viewed at http://www.historycommons.org/entity.jsp?entity=ray_donovan_1

Ray Donovan was a participant or observer in the following events: 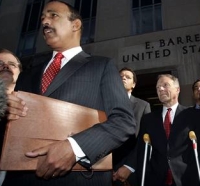 Lawyer Theodore Wells (left) speaks, while Lewis Libby and others look on. Libby is on crutches due to a recent foot injury. [Source: Associated Press]Lewis Libby, the former chief of staff to Vice President Dick Cheney, pleads not guilty to five felony indictments stemming from the Plame Wilson CIA identity leak (see October 28, 2005). “With respect, your honor, I plead not guilty,” Libby says. Libby’s trial will be presided over by Judge Reggie Walton of the US District Court of the District of Columbia; Libby is primarily represented by lawyers Ted Wells and William Jeffress, both known for winning acquittals in high-profile white-collar criminal cases. Wells recently won acquittals for former Agriculture Secretary Michael Espy and former Labor Secretary Raymond Donovan, while Jeffress is a partner at Baker Botts, where former Secretary of State James Baker, a close friend of the Bush family, is a senior partner. Libby waives his right to a speedy trial; it will take his legal team three months to obtain security clearances and to examine classified information the prosecution must provide to the defense. His lawyers are expected to demand that a large amount of classified information regarding Valerie Plame Wilson’s covert CIA status be turned over to them. Jeffress warns reporters that there could be numerous First Amendment “issues” that may produce “protracted litigation” and delay the case, obviously referring to the expected testimony of a number of journalists. Libby’s next court date is February 3, 2006. (Associated Press 11/3/2005; Leonnig 11/3/2005) Libby is apparently in good spirits during the proceedings, smiling and even laughing with his lawyers. (Benjamin 11/3/2005) Outside the courthouse, Wells tells reporters: “In pleading not guilty, [Libby] has declared to the world that he is innocent. He has declared that intends to fight the charges in the indictment, and he has declared that he wants to clear his good name.” He adds that Libby welcomes a jury trial. Libby does not speak to reporters. (CNN 11/3/2005) Former prosecutor Michael Madigan, now a well-known defense lawyer, says Wells and Jeffress are excellent choices to represent Libby, but notes that they are joining the case with “one hand tied behind their back” because of what has already transpired in the investigation. They enter the case “with Libby having given two different statements to the FBI and testifying twice to the grand jury, in which he contradicts three reporters and four or five of his friends in the administration,” Madigan says. “If I was entering the case, I would not be really happy to have that situation.… It would be difficult now to say that you didn’t recall certain things when you’ve already testified that you did remember them.” (Leonnig 11/3/2005)