This page can be viewed at http://www.historycommons.org/entity.jsp?entity=richard_lowry

Positions that Richard Lowry has held:

Richard Lowry was a participant or observer in the following events:

In the days after Michael Steele (R-MD), an African-American, announced his candidacy for governor of Maryland, allegations have resurfaced that in 2002 he was “pelted” with Oreo cookies by Democrats at a political debate (see September 26, 2002 and After); if true, such actions would constitute a significant racial slur. However, reporting of the incident has fallen into question, and Steele himself recently denied being hit by cookies during the debate, though he did say he saw Oreos on the stage near him: “I’ve never claimed that I was hit, no. The one or two that I saw at my feet were there. I just happened to look down and see them.” Eyewitness accounts compiled by the Baltimore Sun show that the allegations are questionable at best; moreover, the Sun reports, accounts of the incident by Republican gubernatorial candidate Robert Ehrlich, Ehrlich’s communications director Paul Schurick, and Steele himself, dramatically contradict each other. Progressive media watchdog organization Media Matters compares the different accounts of the incident, and concludes that the story has grown from an almost-baseless “partisan talking point” into “a ‘fact’ reported by the media” over the last three years. Media Matters notes that several newspapers, including the Chicago Sun-Times, the Washington Post, and the Washington Times, have recently reported the incident as factual, with the Times writing that Steele was “pelt[ed] with Oreo cookies” among the “racially tinged attacks” directed at him by his Democratic opponent in 2002. Chicago Sun-Times columnist Mary Mitchell writes: “Steele has been subjected to the worst racial slurs imaginable. At one debate, a group of black people pelted the stage with Oreos.” Between October 31 and November 16, the Washington Times asserts the incident as fact three times in its editorial pages, and twice in its news reporting. The Weekly Standard reports it three times. Fox News talk show host Sean Hannity twice asserts it as fact on his broadcast, as does one of his guests, National Review editor Rich Lowry. Deroy Murdock, another National Review contributor, asserts it as fact in one of his columns. Washington Post metro editor Marc Fisher cites it in an online chat. Mitchell cites it in the Chicago Sun-Times. The conservative American Spectator cites it as fact once. Syndicated columnist Gregory Kane cites it as fact once. The National Newspaper Publishers Association News Service editor in chief George Curry states it as fact on National Public Radio, as does the host of the NPR program, Ed Gordon. The Investors Business Daily cites it as fact in an editorial. MSNBC’s Tucker Carlson cites it as fact on the air. The Associated Press cites it as fact in an article. Media Matters also notes that the story resurfaced briefly during the August 2004 Republican National Convention, with the Baltimore Sun reporting that Steele and Ehrlich “still talk” about the incident, and the Washington Post reporting it as fact. (Segraves 11/15/2005; Media Matters 11/21/2005)

March 8-9, 2007: Columnists Accuse Fitzgerald of Engaging in ‘Criminalization of Politics’ 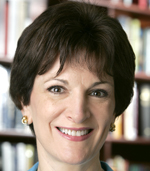 Mona Charen. [Source: News New Mexico]Conservative columnist Rich Lowry, who often writes for the National Review, writes a harsh denunciation of special counsel Patrick Fitzgerald in a syndicated column picked up by, among other media outlets, the Salt Lake Tribune. Lowry begins by joining other conservatives in calling for a presidential pardon for convicted felon Lewis Libby (see March 6, 2007, March 6, 2007, March 7, 2007, March 7, 2007, March 7, 2007, March 8, 2007, and March 9, 2007), but quickly pivots to an all-out attack on Fitzgerald’s integrity as a prosecutor and on the jury that convicted Libby. Fitzgerald “had sufficient evidence to convince a handful of people drawn from Washington, DC’s liberal jury pool that Libby was guilty,” Lowry writes, and states, without direct evidence, that even the jury “didn’t believe Libby should have been in the dock in the first place.” Lowry echoes earlier arguments that Valerie Plame Wilson was exposed as a CIA official by her husband, Joseph Wilson (see November 3, 2005 and Late August-Early September, 2006), who, Lowry writes, should have known that once he wrote a column identifying himself as a “Bush-hater” (see July 6, 2003), questions would inevitably be asked as to why someone like him would be sent on a fact-finding mission to Niger. Lowry also echoes the false claim that Plame Wilson sent her husband on the mission (see February 19, 2002, July 22, 2003, October 17, 2003, and July 20, 2005). “Fitzgerald let himself become an instrument of political blood lust,” Lowry writes. If Democrats and other opponents of the Bush administration want to “score points against ‘the case for war,’” Lowry writes, the way to do that “is through advocacy [and] political agitation,” not by “jailing [Vice President Dick Cheney’s] former chief of staff. This is the very definition of the criminalization of politics. If the other party occupies the White House, each side in our politics is willing to embrace this criminalization, even if it means doing violence to its own interests and principles.” (Lowry 3/8/2007) A day later, Lowry’s National Review colleagues, Mona Charen and Thomas Sowell, echo Lowry’s charge that Fitzgerald’s investigation “criminalized politics.” Charen goes somewhat further, labeling Fitzgerald “Ahab” in reference to the obsessed whale-boat captain of Moby Dick, and compares the Libby trial with the alleged perjury committed by former President Clinton in a sexual harassment lawsuit, where Clinton denied having an affair with a White House intern. Sowell dismisses the entire leak investigation as a great deal of nothing, and writes that Libby’s life has been ruined so that “media liberals” can “exult… as if their conspiracy theories had been vindicated.” (Charen 3/9/2007; Sowell 3/9/2007)

National Review editor Rich Lowry pens a brief blog post announcing that the magazine has “part[ed] ways” with John Derbyshire, a self-proclaimed “racist” (see November 11-18, 2003) who wrote for the magazine for 12 years. The reason is Derbyshire’s recent column for an obscure blog that asserted blacks are genetically inferior to whites and Asians, and advised white and Asian parents to teach their children to avoid blacks for their own safety (see April 5, 2012). The column met with a firestorm of criticism from both left and right, including from Lowry and other senior National Review officials (see April 5-6, 2012). However, Lowry is almost effusive in his praise of Derbyshire, whom he calls “Derb” throughout his post, characterizing him as “a deeply literate, funny, and incisive writer.” Derbyshire can also be “maddening, outrageous, cranky, and provocative” on occasion, Lowry notes, and calls Derbyshire’s recent column “nasty and indefensible.” Because Derbyshire is identified so closely with National Review, Lowry writes, “Derb is effectively using our name to get more oxygen for views with which we’d never associate ourselves otherwise. So there has to be a parting of the ways. Derb has long danced around the line on these issues (see February 1, 2001, February 15, 2001, November 11-18, 2003, July 7, 2008, October 6, 2009, and April 5, 2010), but this column is so outlandish it constitutes a kind of letter of resignation. It’s a free country, and Derb can write whatever he wants, wherever he wants. Just not in the pages of NR or NRO [National Review Online], or as someone associated with NR any longer.” (Lowry 4/7/2012) The New York Daily News’s Alexander Nazaryan writes that “it has been thoroughly refreshing and, dare I say it, modestly uplifting to witness a surprisingly large swath of the right-wing blogosphere condemn Derbyshire’s comments.” Nazaryan writes that he fears Derbyshire’s firing is “merely a public relations move” by the National Review: “[N]o sane publication would want to be associated with this kind of rhetoric, especially in the wake of the Trayvon Martin killing,” referring to the recent murder of an African-American teenager by a white conservative in Florida and the controversy that murder has engendered. But, Nazaryan continues, “[a] more hopeful part of me wants to—no, yearns to—believe that this will engender a serious conversation among the right wing about race, and will maybe even rein in some of the ideological excesses of the tea party movement. We shall see. For now, I am just glad that Derbyshire’s humor was met with outrage by both the right and the left.” (Nazaryan 4/5/2012)