This page can be viewed at http://www.historycommons.org/entity.jsp?entity=richard_makely

Richard Makely was a participant or observer in the following events: 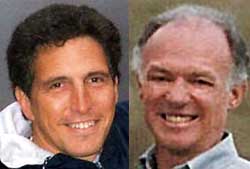 Potential pilots Don Greene and Andrew Garcia. [Source: Family photos]During this time, there apparently are no calls from Flight 93. Several cell phones that are left on record only silence. For instance, although Todd Beamer does not hang up, nothing more is heard after he puts down the phone, suggesting things are quiet in the back of the plane. (Longman 2002, pp. 218) The only exception is Richard Makely, who listens to Jeremy Glick’s open phone line after Glick goes to attack the hijackers. A reporter summarizes Makely explaining that, “The silence last[s] two minutes, then there [is] screaming. More silence, followed by more screams. Finally, there [is] a mechanical sound, followed by nothing.” (van Derbeken 9/17/2001) The second silence lasts between 60 and 90 seconds. (Longman 2002, pp. 219) Near the end of the cockpit voice recording, loud wind sounds can be heard. (Longman 2002, pp. 270-271; Hirschkorn and Mattingly 4/19/2002) “Sources claim the last thing heard on the cockpit voice recorder is the sound of wind—suggesting the plane had been holed.” (Wallace 9/12/2002) There was at least one passenger, Don Greene, who was a professional pilot. Another passenger, Andrew Garcia, was a former flight controller. (Breslau 9/22/2001; Pittsburgh Post-Gazette 10/28/2001; Harnden 7/31/2002)